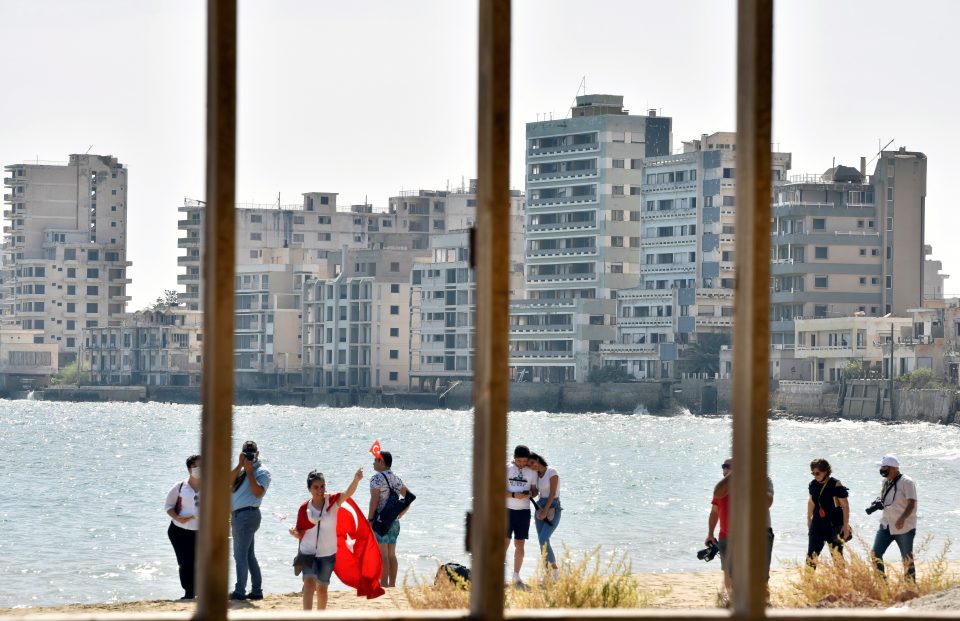 People walk on a beach inside Varosha (Reuters)

The opening on Thursday of part of the fenced area of Varosha prompted strong reactions in Cyprus and abroad with calls on Turkey to cease its provocations and adhere to UN resolutions on Famagusta.

Government spokesman Kyriacos Kousios said it was a serious development.

“The change in the status quo, the violation of international law and the Security Council resolutions are an act that aggravates the climate for the continuation of the talks, especially after the statement of the UN Secretary-General that he intends to take initiative immediately after the completion of the procedures for the election of the new Turkish Cypriot leader,” Kousios said.

Kousios said Turkey’s latest illegal move was not conducive for “a creative, productive dialogue for the solution of the Cyprus problem.” He said though Nicosia wants to go to  talks, it will not do so under threats and faits accomplis.

Political parties condemned the move. Diko said it has submitted in parliament a resolution condemning Turkey’s illegal actions in Famagusta. The party said the resolution is to be voted on during Friday’s plenary session.

In a joint statement, Mitsotakis and von der Leyen referred to “disturbing developments” related to Varosha and reiterated that full respect of UN Security Council Resolutions remains essential. They expressed their resolve to act on the basis of the European Council conclusions of October 2, reiterating that Turkey has to undertake the necessary steps to reduce the tensions in the region, and to engage in a constructive dialogue with Greece, Cyprus and the EU.

The opening of part of the Varosha coastline also stirred reactions in the north with Tatar’s election opponents slamming this move.

Head of the Republican Turkish Party (CTP) and ‘presidential’ candidate Tufan Erhurman said on Thursday that the latest development did not concern the opening of Varosha  per se but rather letting in people to visit.

He also criticised ‘prime minister’ Ersin Tatar of making decision on his own on very important issues without anyone in ‘parliament’ or the ‘government’ knowing.

“What are you, a sultan?” he asked, referring to Tatar.

Former Turkish Cypriot negotiator and CTP ‘deputy’, Ozdil Nami reacted to news by BRT that Varosha was opened, calling it a lie.

“Varosha did not open. Varosha is still a forbidden military zone. Only the coastline was opened for walks with the military’s permission,” Nami said in a tweet. He accused BRT of lying for political gains and said it should be held accountable.

BRT, whose board is always appointed by the ‘government’, is being slammed for backing Tatar.

European Commission and the EU’s diplomatic service (EEAS) spokesman Peter Stano said on Thursday that the member states are “watching, evaluating and will be taking appropriate decisions” on Turkey, following recent developments in the eastern Mediterranean, including a new naval exercise with live fire, south of the Greek island of Skyros.

Stano told the Cyprus News Agency that an EU statement on Tuesday evening on Varosha stands. What the EU expects when it comes to de-escalations in the eastern Mediterranean, he said, “is creating conditions and engage in a constructive positive dialogue.”

The European Peoples’ Party group in the European Parliament and its leader, Manfred Weber called on Turkey to comply with UN Security Council resolutions and return Varosha to its lawful ihabitants under UN administration.