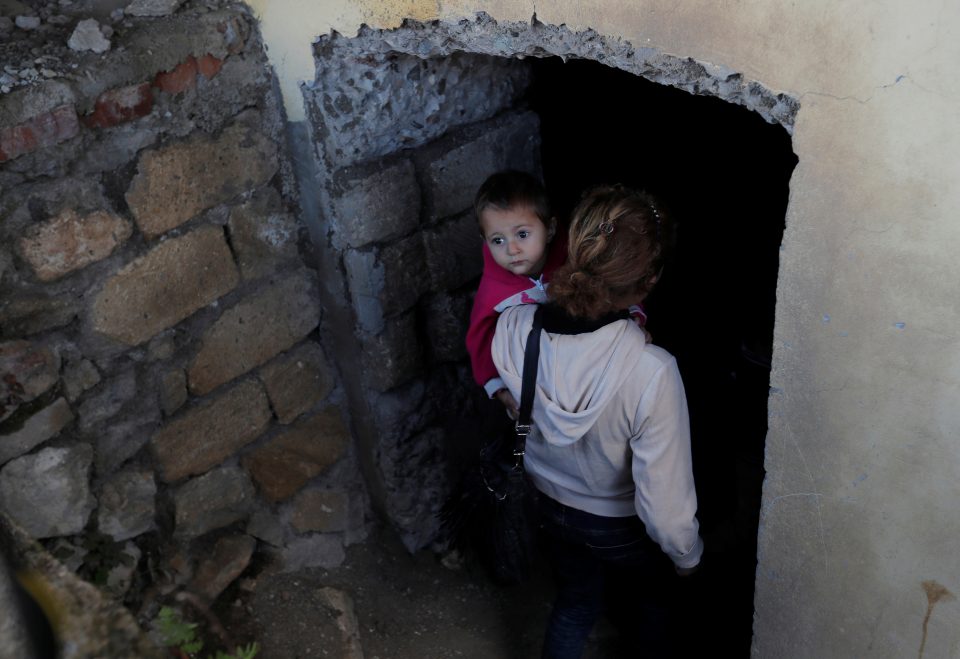 A woman and a child go down to the basement of a building to take shelter during the fighting over the breakaway region of Nagorno-Karabakh, in Shushi (Shusha) October 8, 2020. REUTERS/Stringer

Azeri and ethnic Armenian forces fought new clashes on Friday as Russia prepared to host talks with the warring sides’ foreign ministers on ending the deadliest battles in the South Caucasus for more than 25 years.

Russia’s foreign ministry was quoted by RIA news agency as saying Armenia and Azerbaijan had accepted the offer of talks after the Kremlin invited their foreign ministers to the Russian capital on Friday.

It the two foreign ministers meet, it will be the first direct contact known to have taken place between the two former Soviet republics since fighting broke out in their decades-old conflict on Sept. 27.

More than 400 people have been killed in the fighting in and around Nagorno-Karabakh, a mountain enclave which under international law belongs to Azerbaijan but is populated and governed by ethnic Armenians.

Azerbaijan’s defence ministry said there had been fierce clashes with ethnic Armenian forces during the night along the line of contact that divides the two sides in Nagorno-Karabakh.

More details of the latest clashes were not immediately available.

Fighting has continued despite the start of a concerted peace drive by the United States, France and Russia.

Azeri Foreign Minister Jeyhun Bayramov agreed to attend talks with the three powers on Thursday in Geneva but no details of the meeting have been released.

Armenian Foreign Minister Zohrab Mnatsakanyan did not attend the Geneva talks but was expected to meet Russian, French and U.S. officials in Moscow on Monday.

The latest fighting in the decades-old conflict over Nagorno-Karabakh has raised fears that Turkey, a close ally of Azerbaijan, and Russia, which has a defence pact with Armenia, will be dragged into the conflict.

Stepanakert, the city ethnic Armenians in Nagorno-Karabakh consider the capital of an independent state, was under shelling since Friday morning, Nagorno-Karabakh’s defence ministry said.

In a sign of alarm in the region, the head of a six-country military alliance led by Russia and including Armenia, warned on Thursday that the group could intervene if Armenian sovereignty were threatened.

Washington, Paris and Moscow have led mediation over Nagorno-Karabakh for almost three decades as co-chairs of the Organization for Security and Co-operation in Europe’s Minsk Group. A ceasefire has been violated repeatedly since the end of a 1991-94 war that killed about 30,000 people.

Azerbaijan said on Thursday that 31 Azeri civilians have been killed and 154 wounded since Sept. 27. It has not disclosed information about military casualties.

Nagorno-Karabakh said on Friday 376 of its military personnel and 22 civilians had been killed since Sept. 27.

Azeri President Ilham Aliyev’s main demand for a ceasefire is for Armenia to set a timetable for a withdrawal from Nagorno-Karabakh and surrounding Azeri territories.

Armenia has ruled out a withdrawal from territory it considers its historic homelands. It has also accused Turkey of military involvement in the conflict and sending in mercenaries, allegations denied by Ankara.

Exploring the heart – the circulatory system!