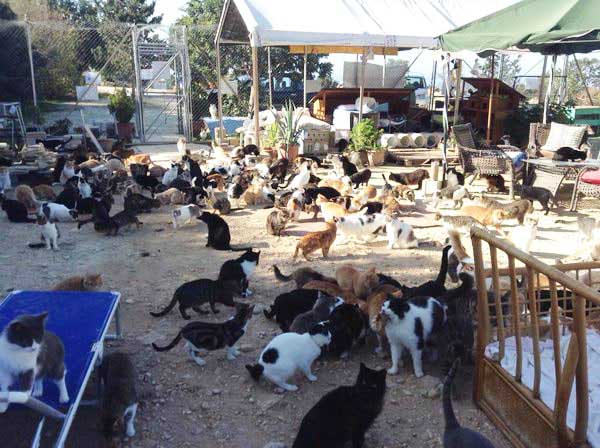 A surprise presentation took place at a local taverna and volunteers and fundraisers handed over a cheque for €2,000 as well as an award to facility managers Dawn Foote and husband Mark. Since 2011, the pair have dedicated their lives to the cats and kittens at the park, a registered charity.

“We held a surprise presentation to celebrate the rehoming of one thousandth cat from the park. We aimed at collecting one euro for each of the re-homed cats, €1,000, but it was so successful that we were able to present Dawn and Mark with a cheque for €2,000,” supporters Alan and Jan Norman told the Cyprus Mail.

The 1000th cat to be rehomed was an 18-year-old male cat named Kia, who was adopted by Jan Carter. He had been living at the park for around six years after his owner relocated to Australia and was advised that the flight and quarantine was not an option for him, and had no luck in finding him a new home.

“We have now reached 1,017 re-homes which we are very proud of,” the cat park manager said on Friday, adding that she was caught unawares by the presentation. The funds donated are much needed as income has all but dried up due to a lack of events which have been scuppered by Covid-19 restrictions, she said.

An annual fair that was scheduled to take place earlier this year had to be cancelled and volunteers are now operating a stall at the duckpond market in Paphos every Sunday to sell as many of the goods earmarked for that event as possible.

“The market is licensed which enables us to sell items there, and we have had to look at new ways to try and drum up an income, as there has been next to nothing coming in,” she said.

One of the new ways the cat park is raising cash is through an online auction they have set up, she added.

The park relies on donations and sponsorship and annual running costs are in excess of €80,000. This includes costs for food, medication, vet bills, a programme of spaying and neutering and maintenance costs. All of the donations go towards looking after the cats and none of the staff are paid.

The cat park also has a ‘go get’ funding page, set up to raise as much money as possible and will be used to pay vet bills, and go towards food, medication, cat litter, sand and park maintenance.

“The pandemic has meant that the cat park is not able to receive the usual number of visitors and this affects the donations,” she said.

Two ‘flight parents’ are also urgently needed to accompany two cats to their forever homes in Berlin. This entails meeting the cats, which have full pet passports, at the airport in Cyprus, taking them into the cabin with them and handing the felines over at the airport in Berlin.

This way of travel ensures the cats suffer the least amount of stress and don’t have to go into the cargo area. ‘It’s quick and the most relaxing way for the cats to travel,” said Foote.

The facility, which will feature in an upcoming episode of ‘A home in the Sun,” is still desperate for volunteers and donated items.

“We are asking people if they can have a rummage through their cupboards and see if they have anything they could donate to us that could help to raise money, we would be extremely grateful,” she said.

The park currently has in excess of 850 cats and kittens needing homes.