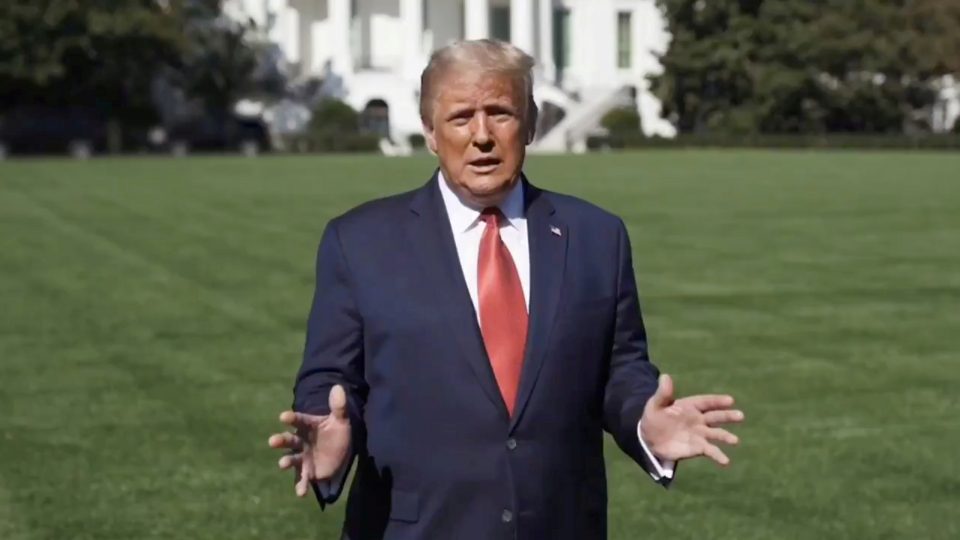 FILE PHOTO: U.S. President Donald Trump speaks outside the White House, where he is being treated for the coronavirus disease (COVID-19), in Washington, U.S. in this still image taken from social media video released on October 8, 2020. @realDonaldTrump/via REUTERS THIS IMAGE HAS BEEN SUPPLIED BY A THIRD PARTY. MANDATORY CREDIT. NO RESALES. NO ARCHIVES./File Photo

President Donald Trump is itching to get back on the campaign trail after being sidelined by a COVID-19 infection but is unlikely to hold any in-person events until at least Monday, aides said on Friday.

Trump said on Thursday night he hoped to hold campaign rallies in the crucial swing states of Florida on Saturday and Pennsylvania on Sunday, but aides said the short notice would make the events difficult to stage.

Questions remain about whether Trump, who announced on Oct. 2 he had the virus and spent three nights in a military hospital, is still contagious. Trump told Fox News he was likely to be tested for the virus on Friday.

The illness has kept the Republican president away from holding public rallies and attending fundraisers at a critical juncture of the campaign, as he trails Democratic rival Joe Biden in opinion polls with just weeks to go before the Nov. 3 election.

White House spokeswoman Kayleigh McEnany said the president was hard at work and ready to go as soon as he got approval from his doctor, telling Fox News, “He wants to talk to the American people, and he wants to be out there.”

Trump and his administration have faced criticism for their broad handling of the pandemic, as well as for a lax approach to mask-wearing and social distancing in the White House and – in recent days – confusing messages about how ill the president has been.

With Trump’s management of the pandemic dominating the campaign, a new Reuters/Ipsos poll showed Americans are steadily losing confidence in how he has managed the health crisis – with his net approval on the issue hitting a new low.

White House physician Sean Conley said in a memo released on Thursday that Trump had completed his course of therapy for COVID-19, remained stable since returning home from the Walter Reed medical facility on Monday and could resume public engagements on Saturday.

“There are medical tests underway that will ensure that when the president is back out he will not be able to transmit the virus,” McEnany said, adding Conley would lay out the details later. “He won’t be out there if he can transmit the virus.”

McEnany is one of a string of Trump aides, including his campaign manager, who have tested positive in an outbreak of the virus in the last week within the White House and Trump campaign.

Dr. Anthony Fauci, the nation’s top infectious disease doctor, told MSNBC on Thursday that guidance from the U.S. Centers for Disease Control said a patient is considered infectious for 10 days from the onset of symptoms or until two negative molecular diagnostic tests 24 hours apart.

The White House has declined to say when Trump last tested negative for the disease.

Trump was scheduled to do an on-camera interview with Fox News on Friday night, his first since being diagnosed. Fittingly given he is a former reality television star, Fox said in a press release that Dr. Marc Siegel “will conduct a medical evaluation and interview during the program.”

Biden has continued to campaign during Trump’s illness, with events scheduled on Friday in Las Vegas, Nevada.

The former vice president, who has sharply criticized Trump’s handling of the pandemic, is leading in national polls but the advantage is more narrow in some of the swing states that may determine the election outcome.

On Friday afternoon, Trump told conservative radio host Rush Limbaugh he was working to get coronavirus antibody drugs developed by Regeneron Pharmaceuticals Inc and Eli Lilly and Co approved quickly and out to hospitals after his own experience.

He might not have recovered without those treatments to combat his illness, he said, adding his doctors at one point told him: “You could have been very bad. You were going into a very bad phase.”

The Trump and Biden campaigns sparred on Thursday over a televised debate that had been planned for next week. Trump pulled out of the scheduled Oct. 15 event after the nonpartisan debate commission said it would be held virtually, with the candidates in separate locations, because of safety concerns after Trump contracted COVID-19.