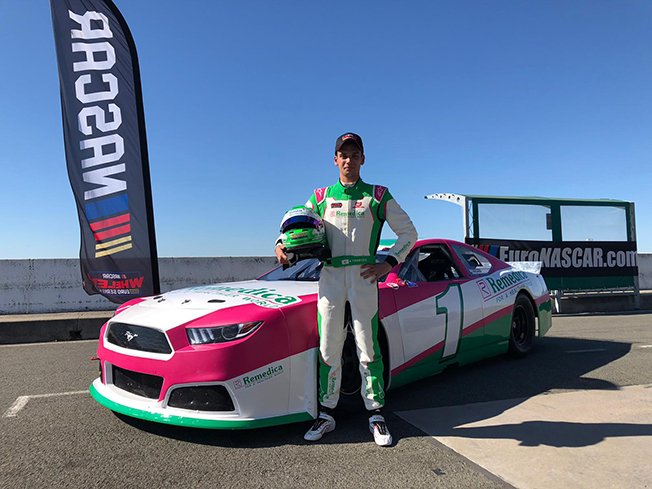 Cypriot driver Vladimiros Tziortzis stands next to his Ford Mustang

Vladimiros Tziortzis has climbed up the rankings in the EuroNascar 2 championship, moving into fourth position after the recent double race in Belgium.

The autumnal weather and intermittent rain made the event difficult for all drivers and their respective teams, highlighting the importance of choosing the right tyre compound at the right time. Many drivers had to retire after a number of collisions and bumps during the race, with the safety car having to be used more than once to clear the track from any debris.

“It was one of the most difficult weekends since I started racing in Europe in 2016. The weather was a pain to deal with for everyone, while some issues during qualifying made things even worse”, said Tziortzis.

“I could have done better, particularly in the second race had I not been hit by another car. I am satisfied, however, I’ve taken enough points”, he added.

In the Saturday race, Tziortzis qualified in 13th place, with the entire qualification process being conducted in constant rain and the Cypriot driver suffering from a malfunctioning window wiper and windshield defogger system, causing him to complete just one good lap with limited visibility.

Unfortunately for all drivers involved, full wet tyres were used since the track was wet at the start, but they suffered in performance later on as the track began to dry.

On Sunday, just minutes before the cars left the pits, teams received information that they could use dry tyres, the correct compound for the track’s condition, despite the overcast sky above the track.

Just like on Saturday, the Sunday race began behind the safety car, which made a further three appearances during the race. In a tumultuous race, Tziortzis finished in 10th place, having lost valuable ground in the earlier stages after having been hit by another car which sent him off the track for some time.

“The next double race on November 14 and 15 is in the Czech Republic. We now have a big gap between events which allows both myself and the team to prepare for what’s to come”, Tziortzis said.

“We also have to take into consideration that the rescheduling of the championship and the move towards the end of the year has pushed races into winter, which results in more adverse racing conditions”, Tziortzis concluded.

OPEC says demand for oil will flatten after 2030