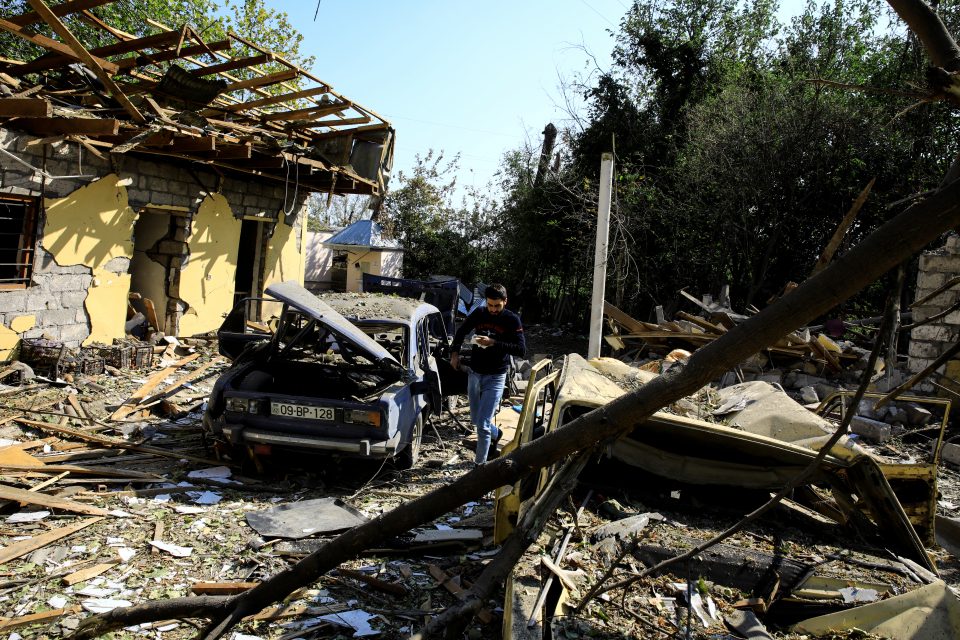 Residents search for their belongings at a restaurant hit by a shelling in the town of Barda, Azerbaijan

Azerbaijan and Armenia accused each other of swiftly violating the terms of a ceasefire in Nagorno–Karabakh on Saturday, raising questions about how meaningful the truce, brokered by Russia, would turn out to be.

The ceasefire, clinched after marathon talks in Moscow advocated by President Vladimir Putin, was meant to halt fighting to allow ethnic Armenian forces in Nagorno–Karabakh and Azeri forces to swap prisoners and war dead.

But within minutes of the truce taking effect from midday, both sides accused each other of breaking it.

The Armenian defence ministry accused Azerbaijan of shelling a settlement inside Armenia, while ethnic Armenian forces in Karabakh alleged that Azeri forces had launched a new offensive five minutes after the truce took hold.

Azerbaijan said enemy forces in Karabakh were shelling Azeri territory. Both sides have consistently denied each others’ assertions about military activity.

In a statement which suggested the ceasefire was not completely dead however, Azeri President Ilham Aliyev said the warring parties were now engaged in trying to find a political settlement.

The Moscow ceasefire talks were the first diplomatic contact between the two since fighting over the mountainous enclave erupted on Sept. 27, killing hundreds of people. The enclave is internationally-recognised as part of Azerbaijan but is populated and governed by ethnic Armenians.

Russian Foreign Minister Sergei Lavrov, who helped mediate, said in a statement in the early hours of Saturday after more than 10 hours of negotiations that the ceasefire had been agreed on humanitarian grounds.

The International Committee of the Red Cross would help make the truce work, he said.

“The specific terms of the ceasefire still need to be agreed,” said Lavrov, who said Armenia and Azerbaijan had also agreed to enter into what he called substantive peace talks.

Those talks would be held under the auspices of the Organization for Security and Co-operation in Europe’s (OSCE) Minsk Group, he said.

Armenian Foreign Minister Zohrab Mnatsakanyan and his Azeri counterpart Jeyhun Bayramov did not speak to reporters in Moscow after striking the ceasefire deal.

But Mnatsakanyan later paid tribute on Armenian state TV to President Putin, whom he said had played a key role in making sure the talks happened and had personally intervened to help get an agreement.

Turkey, which has strongly backed Baku, welcomed the deal but said much more was needed.

“The humanitarian ceasefire is a significant first step but will not stand for a lasting solution,” the Turkish foreign ministry said in a statement.

“Turkey emphasized that it will support any solution approved by Azerbaijan. Turkey will continue to stand by Azerbaijan in the field and at the table”.

The Azeri and Turkish foreign ministers also spoke by phone on Saturday.

France welcomed the ceasefire, but said it now had to be fully implemented.

“It must now be implemented and strictly observed in order to create the conditions for a permanent cessation of hostilities between the two countries,” French Foreign Ministry spokeswoman Agnes von der Muhll said in a statement.

“Substantial discussions, to which the parties have engaged under the aegis of the co-chairs of the Minsk group, must resume without preconditions.”

Renewed fighting in the decades-old conflict has raised fears of a wider war drawing in Turkey, a close ally of Azerbaijan, and Russia, which has a defence pact with Armenia.

The clashes have also increased concern about the security of pipelines that carry Azeri oil and gas to Europe.

The fighting is the worst since a 1991-94 war that killed about 30,000 people and ended with a ceasefire that has been violated repeatedly.

Turkey: opening part of Varosha not in violation of UN resolutions (Updated)

A minute with Vasia Charalambides Photographer