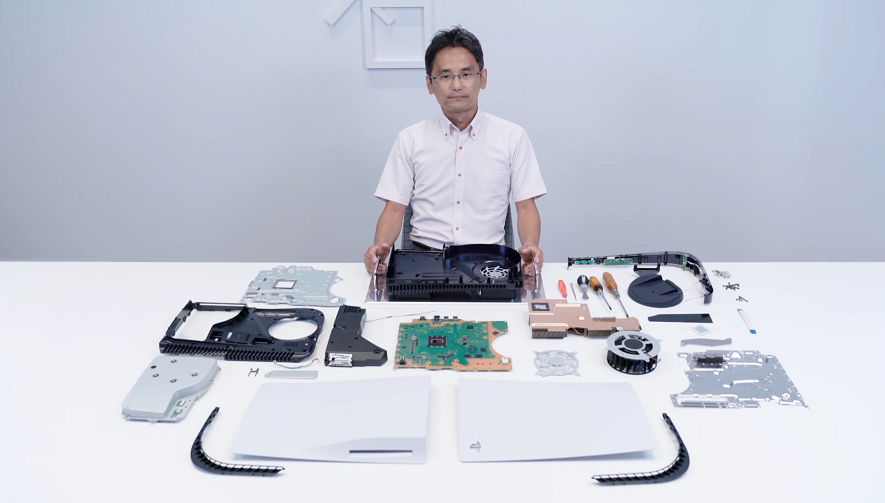 Sony has finally revealed the PlayStation 5’s internal architecture and components, with the next generation console shaping up for release on November 12.

The PlayStation 5 teardown video, as Sony calls it, starts off with a warning that such actions at home would invalidate the warranty for the machine, meaning that this is just an informational clip, not an instructional one.

The video was presented by Vice President of Sony’s Hardware Design Division’s Mechanical Design Department Yasuhiro Ootori. The first and most obvious thing is just how large the new PlayStation 5 is, essentially covering the presenter’s entire torso when stood vertically.

Its dimensions are stated to be 104mm wide, 390mm high, and 260mm deep. The new dimensions are said to aid in a “dramatic improvement in performance in processing power and quietness”. The fan’s intermittent loudness was one of the complaints plaguing the original PlayStation 4.

At the front of the console is a single USB Type-C port with a speed of 10Gbps and a Type A port with Hi-Speed USB support. In the rear, we see two Type-A ports with SuperSpeed USB support, a LAN port, an HDMI port, and a power port.

In the front, the black glossy part of the console, which houses the machine’s components, is encased in a white protective material. Between these two parts there are two rows running vertically which act as air vents, while the entirety of the rear side acts as an exhaust port.

The console’s base is then removed. The base can be removed when wanting to place the PlayStation 5 in a horizontal position, with the screws being able to be stored within the base itself. As the PlayStation 5 has concave sides, it needs a little stand to allow it to sit horizontally. The stand can be put in place once the base has been removed. Both of the concave white panels can be removed with no tool required by the user.

With next generation games being set for massive installation size increases, consumers have long expressed concerns with how much storage they will have available, both on the PlayStation and Xbox variants. Microsoft has already confirmed that consumers will be able to purchase a 1TB Storage Expansion Card to resolve this issue.

In the case of the PlayStation 5, Sony will allow storage expansion through an M.2 interface with PCIe 4.0 support. The default storage of the PlayStation 5, which is seen up close later on in the video, is made of an 825GB SSD drive, foregoing the HDD setup of the previous generation. The custom-made SSD controller used here can provide read speeds as fast as 5.5GB per second at raw data transfer rates, greatly decreasing game load times.

Removal of the cooling fan shows just how big a component this is. The fan has a 120 mm diameter, is 45 mm thick, and is double-sided. The Ultra HD Blu-ray drive unit is next to be seen, which is fully encased in sheet metal and is mounted with two insulating layers to decrease drive noise and vibration while the discs are spinning.

Following the removal of the cable connecting the next generation Wi-Fi 6 and Bluetooth 5 receivers, as well as the protective shield, the first of the machine’s two primary components of interest, the processing unit, can be seen. The PlayStation 5 has an x86-64-AMD Ryzen Zen 2 CPU, with 8 cores, 16 threads, and can run up to 3.5GHz.

Then there is a close look at the GPU, an AMD Radeon, which is an RDNA 2-based graphics engine. The GPU is driven at up to 2.23 GHz and can deliver 10.3 teraflops. Memory-wise, the console has 8 GDDR6 of RAM, delivering a maximum bandwidth of 448GB per second. Overall RAM comes up to 16GB.

Ootori explains that the console’s system on a chip (SoC) is very small and runs at a very high clock rate, meaning that Sony had to greatly improve the performance of the thermal conductor used in the machine to deal with the extremely high thermal density in the silicon die. The thermal conductor is placed between the SoC and the heat sink.

There is also get a good look at the PlayStation 5’s heat sink, also one of the more sizable components and crucial to the reliable running of the machine. Just like the previous two generations of PlayStation consoles, the heat sink uses a heat pipe, with Ootori explaining that “the shape and airflow have made it possible to achieve the same performance as a vapor chamber”. A vapor chamber is a somewhat different configuration, having a more planar design than a heat pipe.

The entire teardown video can be viewed here: https://www.youtube.com/watch?v=CaAY-jAjm0w&ab_channel=PlayStation&t=0s