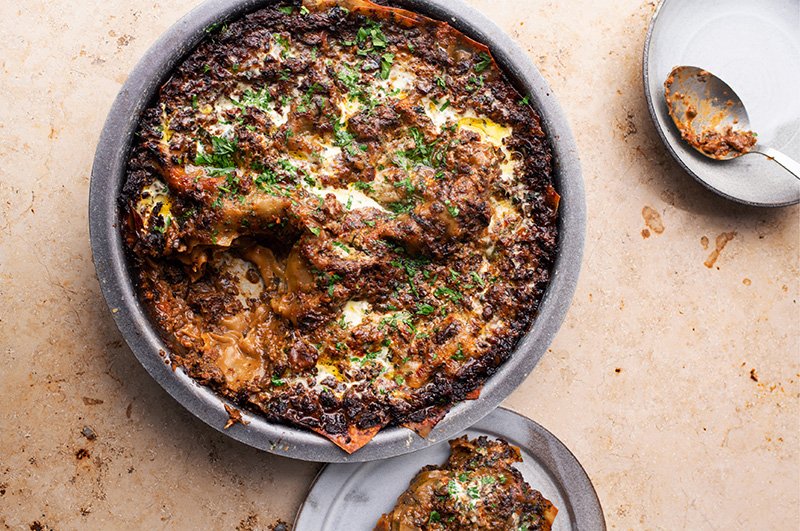 When talking about food, the word ‘fusion’ can strike fear into a diner’s heart. More often than not, it suggests mismatched dishes chucked together with relatively little thought or consideration.

However, Yotam Ottolenghi and Ixta Belfrage are here to change your mind – and respect is at the core of everything they do. Ottolenghi is a giant in the food world and for his latest book he’s collaborated with Belfrage, who worked in his test kitchen for four years.

The result is Flavour, a collection of exciting new dishes paying tribute to a range of cultures – and incidentally, it’s all vegetarian. Like Ottolenghi’s previous veggie cookbooks this is a real celebration of vegetables, not sad beans on a plate.

Ottolenghi says the pair’s approach to writing the book was “pretty similar”, but they brought “very different backgrounds” to the table. “My background is deeply rooted in the Middle East,” explains Ottolenghi, who was born in Jerusalem. “I’ve lived here [England] for more than 20 years and gone through my own trajectory. Ixta has less experience writing books, but tonnes of experiences from being all over the world, and a really interesting background that includes Mexico, Brazil, Italy and France. And so all these stories came together.”

“We both love big flavours and big gestures. Intensity is definitely something we have in common, but the details are quite different,” Ottolenghi adds – and the recipes reflect this.

Whether it’s swede gnocchi with miso butter, za’atar cacio e pepe or caponata with silken tofu, the recipes marry together global flavours. For Ottolenghi, “all these cultures” are united by one thing: “The human palate. We’re attracted to certain flavours, so if you substitute anchovies with miso – these two things are from quite different cultures, but they both involve the same level of saltiness, umami, fermentation – things that are really cross-cultural. So it doesn’t take a huge leap of faith to substitute one thing that may have been in a dish from one culture, with another from a different culture.”

Put the chestnut and oyster mushrooms into the large bowl of a food processor in three or four batches and pulse each batch until finely chopped. Toss the chopped mushrooms in a large bowl with three tablespoons of oil and one teaspoon of salt and spread out on a large, 40cm x 35cm parchment-lined, rimmed baking tray. Bake for 30 minutes near the top of the oven, stirring three times throughout, until the mushrooms are golden-brown; they will have reduced in volume significantly. Set aside. Reduce the oven temperature to 200C fan.

Meanwhile, combine the dried mushrooms, chillies and hot stock in a large bowl and set aside to soak for half an hour. Strain the liquid into another bowl, squeezing as much liquid from the mushrooms as possible to get about 340ml: if you have any less, top up with water. Very roughly chop the rehydrated mushrooms (you want some chunks) and finely chop the chillies. Set the stock and mushrooms aside separately.

Put the onion, garlic and carrot into the food processor and pulse until finely chopped. Heat 60ml of oil in a large sauté pan or pot on a medium-high heat. Once hot, add the onion mixture and fry for eight minutes, stirring occasionally, until soft and golden. Pulse the tomatoes in the food processor until finely chopped, then add to the pan along with the tomato paste, one-and-a-half teaspoons of salt and one-and-three-quarter teaspoons of freshly cracked black pepper. Cook for seven minutes, stirring occasionally. Add the rehydrated mushrooms and chillies and the roasted mushrooms and cook for nine minutes, resisting the urge to stir: you want the mushrooms to be slightly crisp and browned on the bottom. Stir in the reserved stock and 800ml of water and, once simmering, reduce the heat to medium and cook for about 25 minutes, stirring occasionally, until you get the consistency of a ragù. Stir in 100ml of the cream and simmer for another two minutes, then remove from the heat.

Combine both cheeses and both herbs in a small bowl. To assemble the lasagne, spread one-fifth of the sauce in the bottom of a 30cm x 20cm dish, then top with a fifth of the cheese mixture, followed by a layer of lasagne sheets, broken to fit where necessary. Repeat these layers three more times in that order, and finish with a final layer of sauce and cheese.

Drizzle over one tablespoon of cream and one tablespoon of oil, then cover with foil and bake for 15 minutes. Remove the foil, increase the temperature to 220C fan and bake for another 12 minutes, turning the dish round halfway. Turn the oven to the grill setting and grill for a final two minutes, until the edges are brown and crisp. Set aside to cool for five or so minutes, then drizzle over the remaining tablespoon of cream and oil. Sprinkle over the remaining parsley, finish with a good grind of pepper and serve.

Flavour by Yotam Ottolenghi and Ixta Belfrage is available now