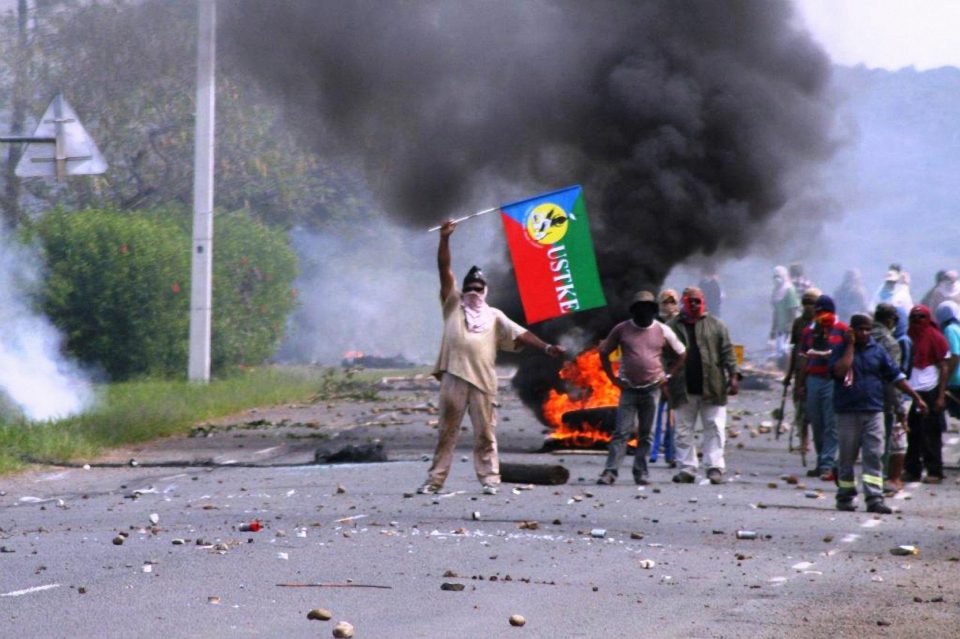 epa01815610 Members of the pro independence trade union USTKE man a barricade outside Noumea, French Pacific Territory of New Caledonia, 04 August 2009. The demonstrators clashed with the Police and 27 officers were injured. 11 detentions were performed after the incidents. EPA/STR

On Sunday New Caledonia voted to remain French by a majority of 53.3 per cent to 46 per cent. That’s hardly an overwhelming majority, but it was the second referendum in two years to reject independence in the South Pacific archipelago, so we may take it as a done deal.

The odd thing about that outcome is that almost three-quarters of the islands’ 270,000 people are not of European descent. They are ‘Kanaks’ (descended from the original Melanesian inhabitants), other Pacific islanders, or Asians, but a substantial proportion of them want to remain citizens of a European country more than 16,000 km away.

Yet it’s not unique. While the other powers of Western Europe gave all their colonies independence more than a generation ago, France stays on not only in the South Pacific (New Caledonia and French Polynesia) but in Africa (Mayotte and Réunion), in the Caribbean (Martinique and Guadeloupe) and in South America (French Guiana).

Moreover, it does so with the approval of the local inhabitants, although nowhere are ethnic French people a majority. What is the mysterious allure of being French that persuades so many non-European people to vote in favour of living in ‘overseas departments’ of France itself?

A large part of the allure is spelled M-O-N-E-Y. If you live in an overseas department of France, then you get a good, free education and a French level of public and social services. Per capita income in New Caledonia is ten times that in other nearby island nations like Fiji, Vanuatu, Samoa, and the Solomon Islands.

Mauritius and Réunion are almost identical large islands off the east coast of Madagascar. They even both speak French, but Mauritius fell into British hands in 1810 and got its independence in 1968, whereas Réunion stayed under French rule and is now an overseas department of France. Per capita GDP in Mauritius is $11,203 a year, in Réunion $25,900.

It’s the same in the Caribbean. Guadeloupe and Martinique, each with around 400,000 people, have GDPs per capita of $25-27,000; the two nearest ex-British islands, Dominica and St. Lucia, are in the $7-10,000 range. And French Guiana has the highest per capita income in all of South America (though that is largely due to the fact that it hosts the European Union’s main spaceport).

Most startling of all is the Comoro Islands, north of Madagascar. Three of the four main islands voted for independence in a 1974 referendum. The fourth island, Mayotte, voted to stay with France then, and chose full ‘overseas department’ status by a 95.5 per cent majority in another referendum in 2009.

The proudly independent ‘Union of the Comoros’, one million people strong, has a GDP per capita of $1,400. Mayotte’s is ten times as high, and half of its quarter-million people are illegal immigrants from the other islands.

The African Union still insists that Mayotte’s status is illegal, because it didn’t decolonise with the other islands, but the Mahorais aren’t interested, especially since the Union of the Comoros is also the world capital of military coups. They also don’t seem to mind that traditional Islamic law is now being replaced by the French civil code (or at least the female half of the population doesn’t).

None of these places is an earthly paradise, and none enjoys as high a living standard as France itself. There were violent independence movements in several of them in the 1970s, before France hit on the strategy of showering them with economic benefits.

It makes perfectly good sense for a New Caledonian or a Réunionnais to trade in the doubtful blessings of impoverished small-state nationhood for the citizenship of a First-World country and access to all its benefits, without even having to leave home.

And if you do want to leave home, you can move to France (as many do) or anywhere else in the European Union, for that matter. The real puzzle is: what’s in it for the French?

It’s certainly not economic gain: the subsidies France pays far outweigh any profits it might get from privileged access to the limited resources of these small territories. The benefits for France are almost all psychological.

Most other European empires were run as pragmatic business ventures. If the colonies are not turning a profit anymore, perhaps because they are getting too expensive to control, then walk away and leave them to their own devices.

France had a bigger emotional investment in empire, perhaps because it was in steady decline from being the greatest European power in the 18th century to a much humbler status today. It could be pragmatic if necessary (as when it gave all its mainland African colonies independence in 1960), but it’s willing to pay for the privilege of having small bits of France in other continents.

Who could criticise the residents of those places for taking advantage of this foible?

Two charged with voting fraud in the north