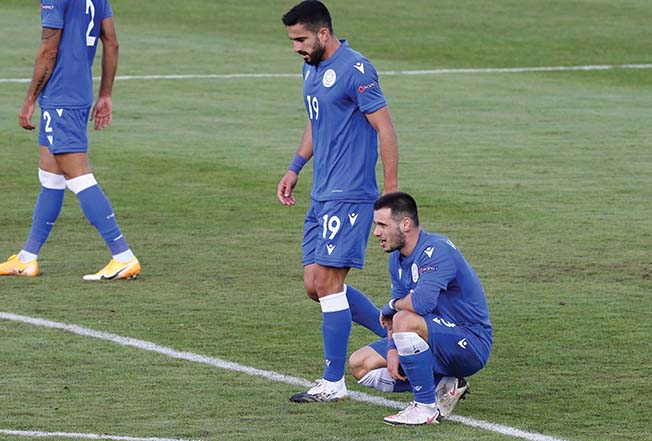 Cyprus has endured an abysmal campaign so far, suffering three straight defeats at the hands of Montenegro, Azerbaijan and Luxembourg

Cyprus take on Azerbaijan on Tuesday night as part of the Nation League’s fourth round of games.

The match kicks-off at 19.00 Cyprus time and will take place at Elbasan Arena in Albania, following Uefa’s decision to move Nations League games from Armenia and Azerbaijan to neutral venues after the escalating conflict between the two nations over the Nagorno-Karabakh region.

Cyprus will be looking to take their first points in the competition with the national team having endured an abysmal campaign so far, suffering three straight defeats at the hands of Montenegro, Azerbaijan and European minnows Luxembourg.

While long-term squad-building and rejuvenation and the inadvertent support for local youth development are at the heart of the project, coach Johan Walem will undoubtedly be unhappy at how his side have fared so far.

In the post-match press conference, the Belgian manager conceded that Cyprus were outplayed for the majority of the game, particularly in the first half. “Luxembourg were better than us in the first half and rightfully took the lead”, Walem said.

“In the second half we tried to improve, we played better, created promising opportunities, took risks, but could not reverse the result and the state of the game which had been shaped in the first half”, he added.

“We will continue putting in the effort. Of course we are disappointed at the result. We have to regroup and see how we can fix our mistakes for the following game”, Wallem concluded.

In a statement released on social media, Cyprus and FC Astana forward Pieros Sotiriou spoke extensively on both the game and Cyprus’ overall Nations League campaign.

“There’s a saying in football, that victories and successes have many fathers, but failures tend to have just one. This is the easiest way to deal with things and especially in mentalities such ours. This should not be happening with the national team, however, and especially at this point in time where something new is being attempted. We have been honest about this from the start. No one has said that we are aiming to win League C nor that we are aiming to qualify to the European championship. In fact, the exact opposite was said. We want to build something new which will have longevity and long-term prospects”, Sotiriou said.

“We have a lot of young kids in the team. We must all understand and be patient with the fact that this is a collective that’s being built from scratch. We have a long way to go and a lot of work to put in before we become a good side”, Sotiriou added.

“No player is pleased with the results we’ve taken and the performances we’ve shown. Unfortunately, we have once again to get the points we wanted. The responsibility for this is strictly ours, it belongs to the players. We must understand the national team is above our club duties. To wear this shirt is an honour and a moment of pride”, he continued.

“We are lucky to have this opportunity. We have to honour this and not just let it pass us by. We need to work hard, be patient and work collectively to get good results in the long term. We all have to understand this. The Cyprus Football Association, the team, the public, and the media”, Sotiriou concluded.

In relation to fears stemming from some Czech Republic players, Cyprus’ opponents before the Luxembourg game, coming back positive after being tested for Covid-19, the Cyprus national team, players, staff, and other people who travelled with the squad were all subjected to Covid-19 tests on Saturday morning in Luxembourg, with all tests coming back negative.

More than 25% of Cypriots concerned about internet security

Algorithmic transparency and the role of education