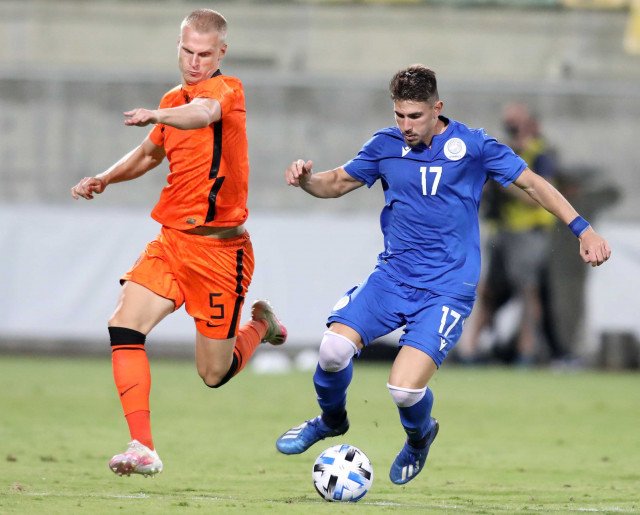 The Cyprus national under-21 football team suffered a humiliating defeat against their Dutch counterparts on a mild Tuesday evening at the AEK Arena in Larnaca, with the Cypriots losing by seven goals to nil.

Cyprus started in a 4-2-3-1 shape with Paraskevas between the sticks, Andreou, Korrea, Pileas, and Peratikos in defence, Panayiotou and Mamas as the two traditional centre midfielders, Roles at the number 10 role, Katsantonis and Konstantinou on the wings, and Sotiriou leading the line.

Although the Netherlands started in what seemed like an ostensibly traditional 4-4-2 shape, their fluidity, movement and positional interchanges meant that their shape was much harder to predict when they were in possession of the ball, particularly during turnovers.

The first fifteen minutes saw the visiting side trying to impose themselves with their superior physical and technical attributes, squeezing the pitch when defending, and trying to create overloads in attack. Zirkee was especially problematic for the Cypriot defence as he switched from the left to the right wing at will, losing his marker time and again.

Central defender and Cypriot captain Pavlos Korrea was the most vocal player for the hosts, screaming instructions at teammates so as to prevent mistakes and instil positional discipline. Sotiriou was the main attacking outlet in the opening section of the game, with the forward at one point receiving the ball on the half-turn before slickly turning towards goal, forcing his opponent to tackle him from behind resulting in a yellow card.

The Netherlands opened the scoring in the 22nd minute with a powerful long-range shot from Ajax midfielder Ryan Gravenberch. The Dutchman shot from about 30 yards out, from a centre-right position outside of the area, with the ball fizzing past goalkeeper Paraskevas.

Cyprus tried to exert some pressure by sticking close to the man in possession but it was hard to rattle the Dutch, with the visitors being composed when under pressure and able to find a teammate or manoeuvre out of trouble in the majority of cases. Cyprus mostly regained possession when the Dutch attempted a final third pass, where a clogged middle space allowed for clearances or interceptions.

The Dutch could have doubled their lead in the 31st minute when a cross found another Ajax midfielder, Jurgen Ekkelenkamp, free on the right-hand side, just inside the box. Fortunately for Cyprus, Ekkelenkamp’s strong shot hit the side netting.

Cyprus tried to respond in the 33rd minute with Sotiriou holding onto the ball for slightly longer than optimal and his eventual shot hitting the Dutch defender in front of him. The ball bounced towards Roles whose difficult first-time shot went out wide.

Cyprus could have conceded again in the 37th minute, when a cross from the left wing found Stade de Reims forward Kaj Sierhuis, whose header could not be directed towards the net. Cyprus responded with a promising counter-attack in the next minute but the ensuing shot went out wide.

Cyprus tried to close out the half with some gusto, committing players forward and trying to counter with some directness, but could not convert this late spark into a goal. In a telling incident, Cyprus tried to create something from the left side with the overlapping Pileas contesting for the ball, but Hertha defender Deyovaisio Zeefuik easily outmuscled the Cypriot off the ball.

In terms of build-up, it was crucial for Cyprus to beat the initial press from Sierhuis and Zirkzee, who coordinated their tight marking depending on the side from which Cyprus tried to build from. However, in a few instances where Cyprus managed to pass through the two forwards, it was still difficult to give the move any sense of momentum with additional penetrative passes, allowing both forwards to track back and compete for the ball again.

The referee was far from a soft touch, dishing out yellow cards to both teams in each of the two instances where one of their players asked for a foul and stayed on the ground waiting for treatment afterwards. 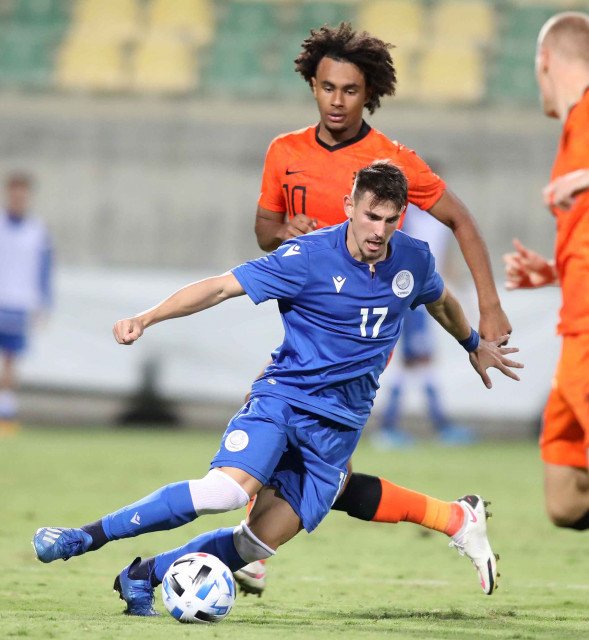 Cyprus conceded a second goal early in the second half. Joshua Zirkzee cut the ball across the six-yard box where goalkeeper Paraskevas could only parry it into the path of the onrushing Ekkelenkamp who finished from close distance in the 50th minute.

The Netherlands would add a third in the minute after that with the exact same scenario repeating itself. Zirkzee running on the inside-left and this time cutting it across to Sierhuis. Sierhuis did not need a poor intervention from the Cypriots the way Ekkelenkamp did just moments earlier, with the forward receiving the ball without much hindrance and finishing at the near post.

Play stopped in the 60th minute after Peratikos and Botman clashed heads after competing for the ball in the air. Thankfully, both players walked it off without any serious injuries being sustained.

Cyprus conceded a fourth goal in the 66th minute. Kadioglu’s cross from the left found Zeefuik on the far post whose first-time pass found Ekkelenkamp who finished emphatically from inside the six-yard box.

The Netherlands added a fifth goal in the 73rd minute with the ball reaching Sierhuis from the left side, with that flank proving to be particularly problematic for the hosts. Sierhuis turned on his own axis before slotting the ball at the near post with a neat finish.

AZ Alkmaar forward Myron Boadu made it 0-6 in the 83rd minute after going past his man with a clever dribble and finishing from close range on the inside left of the penalty area.

Cyprus conceded again in the 89th minute but the referee chalked it off for a penalty instead. Sierhuis took the penalty and scored the visiting side’s seventh goal in the 90th minute. The young forward was seen taking the match ball home after scoring his hat-trick.