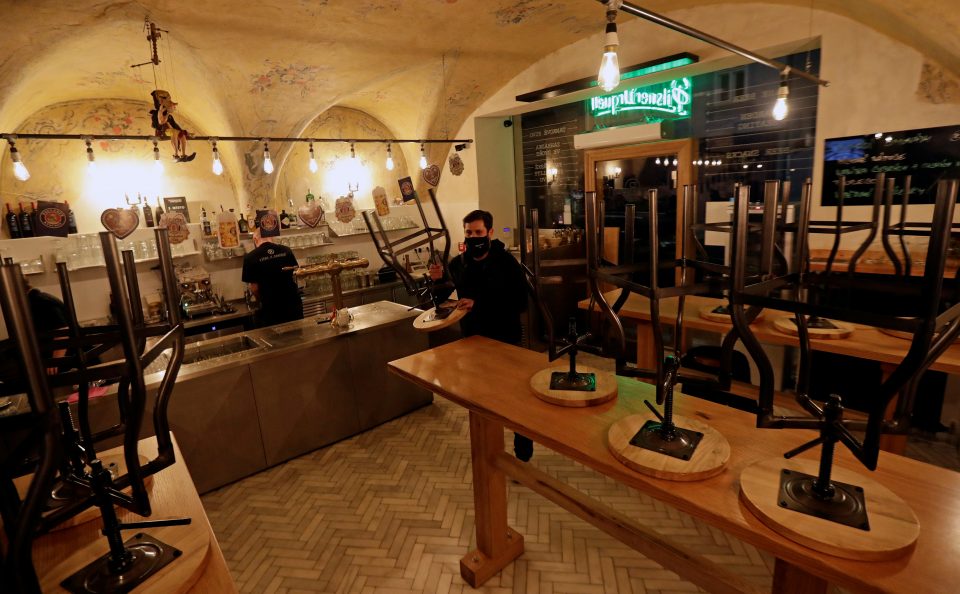 The Czech government ordered bars, restaurants and clubs closed from Wednesday and shifted schools to distance learning as it puts new measures in place to curb the fast spread of novel coronavirus cases.

The Czech Republic is experiencing the strongest surge in Europe when adjusted for population as the number of infections detected since the outbreak began has soared to nearly 120,000, from around 25,000 at the beginning of September.

Hospitals are starting to feel that strain as the number of patients have doubled since the start of October to over 2,000.

The government has been seeking to avoid repeating the strict lockdowns imposed in the spring, which sent the economy into a record contraction. The summer saw a relaxation of restrictions after the country came through the first wave of the pandemic with far fewer cases than western neighbours.

“We are aware that we have one shot, and one shot that has to be successful so we manage the growth of the epidemic this time as well,” Prime Minister Andrej Babis said told a news conference.

Babis said the priority was for hospitals to be able to manage the sharp increase in infected patients.

From Wednesday, public gatherings would be limited to six people, alcohol consumption in public spaces would be banned and masks would be required at public transport stops. Takeaway orders will still be available until 8 p.m.

Schools, expect for pre-schools, would move to online lessons until Nov. 1 – a measure that companies and especially hospitals have worried would affect staffing. This extends distance learning that had already been in place for secondary schools.

The measures will be in place until the start of November, and the government said that while schools would definitely reopen on Nov. 2, other measures would be relaxed according to the epidemiological situation. The government had already tightened curbs to limit restaurant openings and widen the use of masks.

A new round of social restrictions will be announced by the Dutch government on Tuesday evening, including the possible closure of cafes and restaurants, as the Netherlands battles to control the coronavirus in one of Europe’s major hotspots.

The number of cases in the country of 17 million has surged in recent weeks to a daily record of nearly 7,000 on Monday. It now has one of the highest per capita infection rates worldwide.

Prime Minister Mark Rutte’s government has been loath to re-impose tougher restrictions that could hurt a fragile economic recovery, but has come under pressure from health experts to take action to prevent overloading the healthcare system.

Rutte and Health Minister Hugo de Jonge, who have both warned restrictions would follow if conditions did not improve, are scheduled to give a televised news conference at 1900 local time (1700GMT).

While many of its European neighbours imposed compulsory restrictions, the Dutch have largely stuck to recommended guidelines, including on mask wearing and travel.

Among the most severe measures expected to be announced on Tuesday evening are the closure of cafes and restaurants and an evening ban on alcohol sales, national broadcaster NOS reported, citing government sources.

Team sports for people aged over 18 will be halted, using public transport limited to essential travel only and home gatherings restricted to three people per household, the NOS report said.

The measures will be imposed for an initial period of two weeks, the NOS said.

France, like neighbours, is grappling with how to slow the virus’ spread and ease pressure on a once-again strained healthcare system while keeping its 2.3 trillion euro ($2.71 trillion) economy open and protecting jobs.

It reported more than 1,500 COVID-19 patients in intensive care on Monday, a level not seen since late May.

Macron will speak on national television on Wednesday evening and his prime minister, Jean Castex, has refused to rule out local lockdowns.

“Nothing should be off the table when you see the situation facing our hospitals,” Castex told France Info radio on Monday.

Leading newspapers Le Monde and Le Figaro reported that curfews in COVID hotspots were one option, a possibility raised last month by the Scientific Council advising the government.

Health authority data shows the proportion of COVID tests returned positive has shot up to nearly 12% nationwide. A rate below 5% shows control of the spread, health experts say.

“Everything is being examined, nothing can be ruled out,” Marlene Schiappa, a junior minister in charge of Citizenship, told LCI television when asked about a possible curfew.