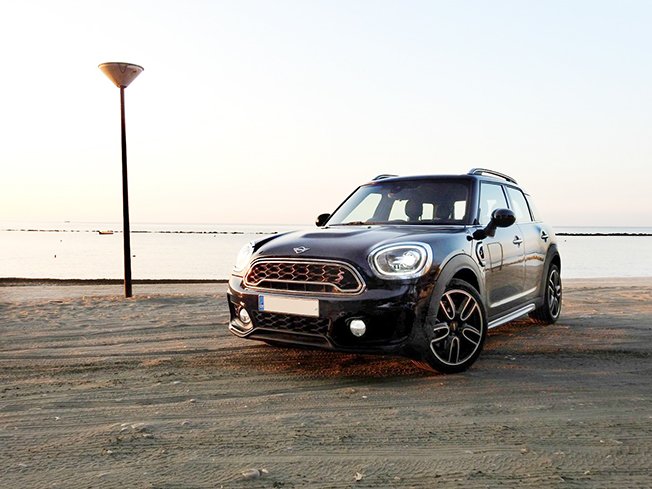 If you are after something stylish yet stealthy, look no further than the Mini Countryman Cooper

Being a little nerdy about cars, I am often inundated with questions from friends and family seeking advice about the purchase of a new car. Things like, ‘Karim, which full-size luxury saloon offers the best value for money these days?’ or, ‘Karim, can you recommend something inconspicuous from which I can run my criminal enterprise?’.

With the car market as saturated and option-rich as it is, these questions invoke a lot of thought, and such irregular inquiries as the latter can require some out-of-the-box thinking. If you are after something stylish yet stealthy, look no further than the Mini Countryman Cooper; and I’ll tell you why.

Exness, a large online Forex broker with its headquarters in Limassol, bought 250 of these very cars for use by employees. The Mini I drove this week, minus some yellow branding and different rims, is pretty much identical. As well as helping my imaginary friend blend in, this should also tell you something about the practicality, size, value and desirability of this car.

Much like the BMW X4 I reviewed recently, the Mini is hard to pigeon-hole with respect to what type of car it is. A bloated hatchback? Or rather a compact SUV? Mini will, of course, try to market the latter, and depending on how you view it, you might just agree. To me this car looks like a large hatchback, likely due to its similarities in design to the regular Mini Cooper – arguably the car that comes to mind when you picture a hatchback. I think it is a really good size.

With the nature of our uneven roads, higher accident rate, interesting terrain to explore by the beach and mountains as well as the ever-present and ever-annoying pavement-parking pandemic, it does make sense, at least on some levels, to drive an SUV here in Cyprus. The Mini offers some of the advantages you get from an SUV (raised driving position and raised ground clearance), without being excessive. In fact, with the exception of families with more than three children, I would challenge anyone to explain why they really needed a bigger car than this.

Despite being quite new and quite niche, the ‘subcompact luxury crossover SUV’ segment (whoever named this was clearly paid by the word) has resonated with buyers, as evidenced by strong sales of the Mini and class rivals like the Mercedes GLA, VW T-Roc and Range Rover Evoque. They have captured the attention of a vast group of people who might have had a full-size SUV but for the fact that they cannot yet afford it.

From the outside it appears smart but angry; the wide-eyed headlights and gurning grill make it look a little thuggish. ‘Oi! Whatchu lookin at?’ it seems to say. Inside, things get super quirky, fun and unmistakably Mini, but they definitely could have used the space more efficiently. Take the centre screen, which is rectangular but surrounded by a large circular LED light that mimics the big central speedo on Minis of old. It creates awkward caverns of unused space, which you just don’t encounter on something like a VW Golf.

On that note, I think the design both inside and out has suffered in the name of authenticity. It is as if Mini’s determination to be easily and universally identifiable, to stick so religiously to the quirky formula upon which they built their brand has got in the way of them effectively capitalising on some of the design opportunities afforded by the larger platform.

Fortunately, Mini are owned by BMW, so dynamically it is just as good as any of its German rivals. This particular car is the ‘SD’ version, so ‘sporty’ diesel, and while 190hp is impressive from a diesel, I would save money and get the regular D. It is €5000 cheaper, more economical and is likely to reduce the issue of torque steer that this car suffers from. Torque steer is when a front wheel drive car feels like it is trying to turn under hard acceleration, and while not necessarily dangerous, it kind of ruins the steering feel. You can solve this by optioning the 4-wheel drive version for an extra €2000, but unless you live in or above Troodos square, this is not necessary.

At around €30,000, this car seems a good mix of sensible and fun. The size makes a lot of sense, and little quirks like Union Jack stitching on the headrests and the projection of a Mini logo when you open the door combine to create a car with more personality than
most of its rivals. Be warned, however: the price is easily inflated by a tempting array of available options, and if things go north of €40,000 (easy if you want an ‘S/SD’ version), for me it strays perilously into nearly-new Mercedes GLC territory – a car with which it cannot compete.

Get the ‘D’ model, tread carefully on the order sheet, and you’ll have yourself a reasonably priced and yet somewhat authentic family car.

“Good progress” is not good enough: EU to push Brexit Britain on trade

Arrest after fight breaks out at football match