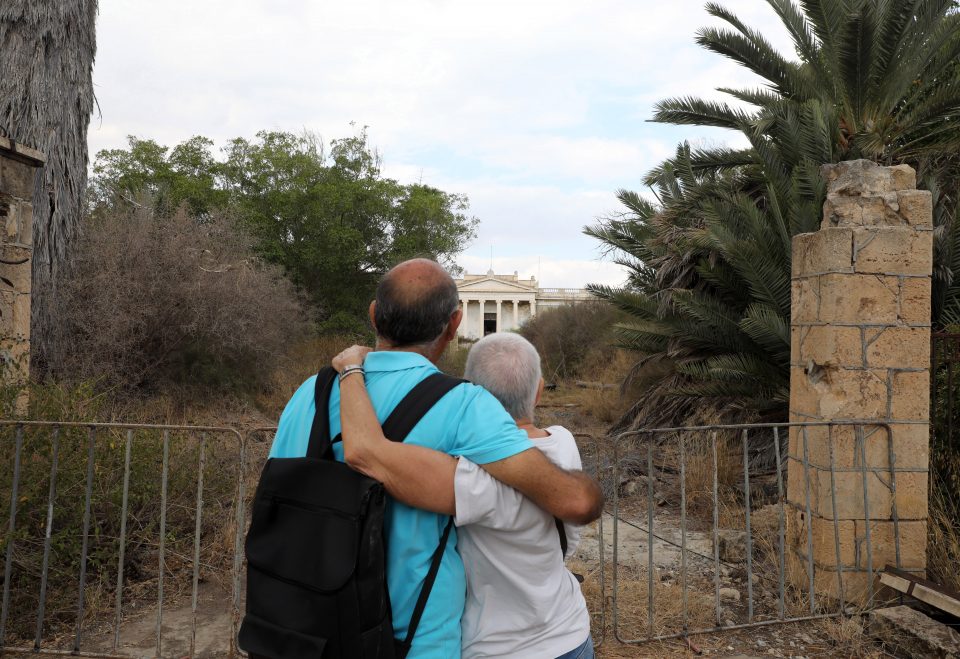 Pavlos Iacovou and Anna Marangou in front of their old school (Photo: CNA)

Heart-wrenching images mixed with sweet childhood memories have been all over social media and news portals since last week when the Turkish Cypriot ‘government’, with Turkey’s blessings, opened part of the fenced area of Varosha, in the occupied part of Famagusta for visitors.

Six Varosha refugees, who had the opportunity to recently return to the town after 46 years, accompanied by staff of the Cyprus News Agency, give us all a glimpse of life in Varosha through their memories.

Anna, Pavlos, Toula, Nicos, Annita and Christos, were between 12 and 23 when they were forced to leave their homes and beloved coastal town behind in 1974 along with all their belongings.

Pavlos Iacovou, 65, was born and raised at the Florida Hotel, owned by his family. Seeing his home, he did not hesitate lift the police tape barring visitors from entering the street the hotel is on.

Access has been given to a small area of Varosha, while entrance to buildings is forbidden due to the risk of collapse.

Bursting into tears, he leaves the rest behind and walks alone into the hotel, filming the surroundings with his mobile phone’s camera.

“My grandfather named the hotel Florida because he really wanted to go to America, Florida,” he told CNA.

Iacovou gives a small tour of the hotel, the lobby, the bar, his father’s office and goes up the stairs leading to the first floor and his family’s apartment.

“This is where I was born and raised,” he said.

He left Varosha on August 15, 1974. He and his wife, Toula settled in Paralimni so that they can be close to their town.

The group walk around the beach area.

“This is where we used to stroll, flirt,” Iacovou said.

Archaeologist and art historian, Anna Marangou, 69, narrates how she used to play as a child on the carousel at the beach in front of King George hotel, one of the oldest, most prestigious hotels until the 1970’s that hosted important people such as poets and Nobel laureates Odysseus Elytis and George Seferis.

Marangou said she could see her home from the hotel but could not access it. She said she left their home along with her sisters and mother on August 13, 1974 after her father, a doctor who was tending to patients who were transferred to Markos hotel, after information the hospital would be bombed by the Turkish air force called them and told them to go.

“I left wearing a swimsuit and a blouse,” she said.

But the group’s visit also shuttered an urban myth; apparently Sophia Loren did not have a house in Varosha.

The said house is on Kennedy Avenue, part of which now hosts a club area for Turkish military officers and their families. Many thought the house belonged to the famous actress but it is in fact merchant Demetris Marangou’s house, Anna’s uncle.

Marangou, who wanted to take a photo but was prevented from doing so by a soldier reminding her this was a restricted area, was surprised to hear a bystander telling her this was in fact Sophia Loren’s house.

In this house, Marangou said, her uncle had the largest library on Cyprus, manuscripts, hagiographies, works of great painters such as Ioannou from Varosha.

“I grew up in this house. The whole family was very close,” she said.

“Years later I found some of my uncle’s books at auction houses and bought them back. But I was told that some of his books are in Kyrenia, in the warehouses that artworks by Greek Cypriots are stored.”

Sixty-one-year-old Annita’s house is right across from Sandy Beach hotel which is used today as an officer’s club.

She tried to walk into her yard but was stopped by an officer in civilian clothes telling her it was forbidden.

She could not go there because the road was closed.

She left Varosha on August 15, 1974. She still has the yellow blouse she had on that day.

While passing from Barclays Bank, on Demokratias Avenue, the town’s high street, talks of rumours that its safety deposit boxes were left intact and that her mother in law’s jewellery was stored in there.

Nicos, 61, and Christos, 58, Karoulas had the opportunity to see their father Andreas’ pharmacy on Evagorou Avenue.

It was the only one with a sign in Greek and Turkish since the pharmacy had a Turkish investor, they said.

The group said this was the most well-known pharmacy because Andreas Karoulas was making his own creams and potions for skin problems which was a common phenomenon in Varosha due to the sea.

The group also reminisced how the Lykeio Ellinidon, also used to host all cultural events such as dance and theatre performances.

Both Marangou and Pavlos Iacovou said they were hurt watching all those visitors strolling the area like tourists.