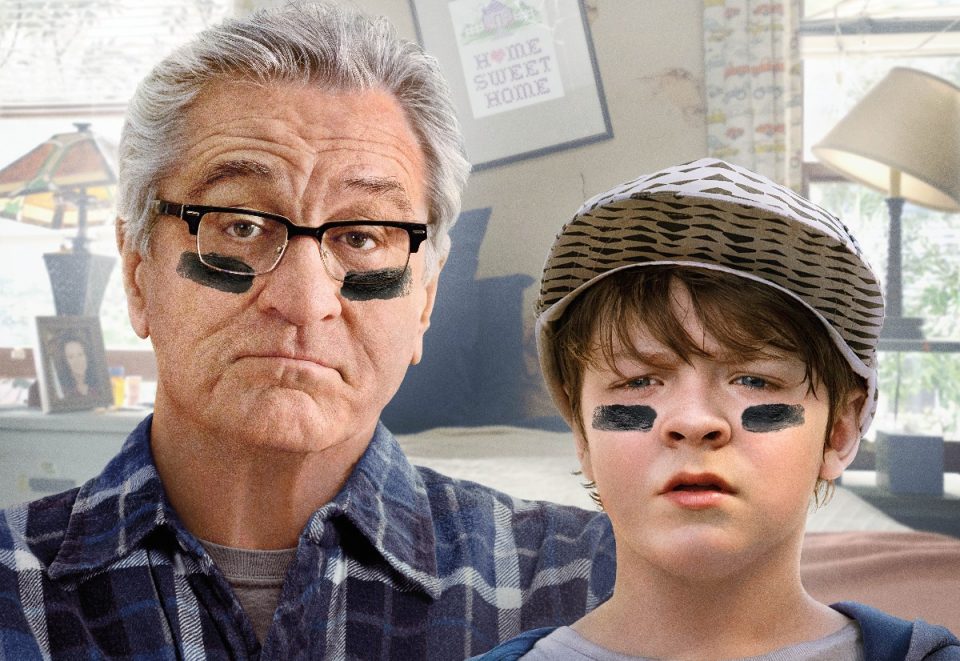 For people who like Hallmark movies, Tim Hill’s The War with Grandpa will probably be a nice way to pass the time. It’s really hard to think of a stronger adjective than ‘nice’ because I can’t imagine anyone (well, anyone between the age of 9 and 70) who would walk away from this movie with a stronger reaction than ‘nice’. Not a positive strong reaction, at least. The plot is so wafer-thin, the dialogue so formulaic, and the creativity so milquetoast that not even the occasional funny moment or emotional nudge moves the needle too far.

The titular war is declared by Peter (Oakes Fegley), a 12-year-old boy who finds out that his grandfather Ed (Robert De Niro) is moving into his room. This most unwelcome news comes thanks to his mom Sally (Uma Thurman), who invites her dad to move in with them, wanting to reconnect with Ed over the mutual loss of her mom. The rest of the household, comprised of dad Arthur (Rob Riggle), older teenage sister Mia (Laura Marano) and younger, adorable sister Jennifer (Poppy Gagnon), range from indifferent to ecstatic at the thought of living with grandpa Ed. Not Peter. Egged on by his school friends, the grandson declares war in no uncertain terms (written on paper and slipped under the door no less) over property stolen. Ed’s geriatric buddies – Jerry (Christopher Walken) and Danny (Cheech Marin) – take the declaration more seriously than he does at first. But after a couple of Home Alone­ riffs at domestic accidents, it’s game on as Ed starts to retaliate.

A lot of other people, those who don’t like the cliched and bland brand that’s associated with Hallmark, will have a tough time running out of all the various antonyms to ‘nice’ when trying to describe The War with Grandpa. And most of that bitterness, frustration and grief that swirls around in the mind, as the film drudges along through all its calculated and already-done-a-million-times-before plot points and shockingly childish dialogue, has a lot to do with De Niro. The last time I saw De Niro in a movie, it was in Martin Scorsese’s The Irishman. From ruthless gangster in an epic crime saga, to a toothless grandpa in a saggy dramedy that’s only epic in how many times it fails to land a joke. Oh, how the mighty can fall. What makes it even more painful is that Uma Thurman, Christopher Walken, Cheech Marin and yes even Rob Riggle are right behind De Niro, reminding us of what an excellent ensemble of actors have gathered here to be a part of something so beneath their immeasurable collective talent.

Crying is what many who have a hard time watching heavyweight actors make silly fools of themselves for a paycheck may want to do. Thankfully, the film is only an hour and a half long, and because it’s so painstakingly calculated to be ‘nice’ you may be caught feeling too guilty to shed a tear. Shades of Home Alone, the TV show phenom Modern Family and the thousand-times-better De Niro comedy Meet the Parents are felt throughout The War with Grandpa. Felt throughout all that slapstick humour, drone spy games and typical family banter around the kitchen table, with at least one pun about marbles that would make Modern Family’s Phil Dunphy giggle like a schoolgirl. Sadly, these shades only serve to remind us of everything Tim Hill’s movie wishes it was.

On a more positive note, The War with Grandpa does have its spurts of genuine, unforced, joy. Seeing Walken dressed in a cap and hoodie intimidating a high-school bully with the bone chilling line “we like fun too”, or Walken again saying goodbye to a dear old friend at a funeral with another killer one-liner that only Walken can deliver in a refreshing way (“Looking good bro”) are certifiable highlights. And it’s impossible for someone like De Niro to not be compelling on screen, even when he has to resort to these types of roles and characters. His dynamic with Riggle will also crack more than a few smiles.

Ultimately however, thinly veiled motifs on war and grief, along with a couple of funny moments, get completely overwhelmed by unoriginal material from start to finish. The War with Grandpa is worthy of a good background movie while you’re doing chores around the house but giving it anything above the lowest score would just feel too disingenuous.

Bloom Yourself, Image consultancy from France to Cyprus

Meditation’s impact on the brain