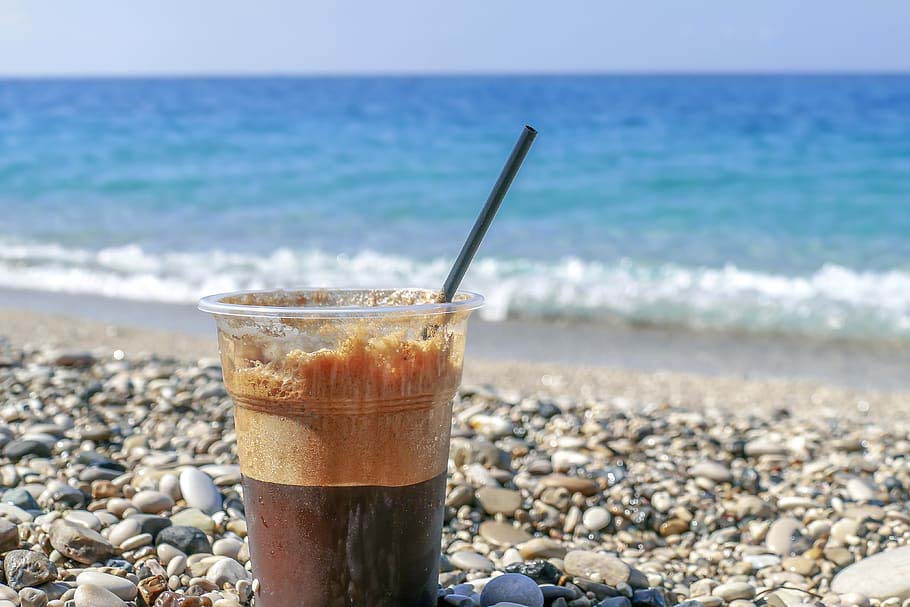 The Greeks are to blame. Not only did they introduce democracy to the world and give rise to some of its greatest thinkers in the forms of Plato and Aristotle, each challenging the world view with their respective versions of The Republic, but also it seems that they are solely responsible for inventing and subsequently perfecting one of the most refreshing drinks known to humankind.

Being Greek, one could probably assume that the drink we are referring to is Ouzo or even one of the world’s oldest wines Retsina. You would, however, be mistaken, because the Greeks are known as the inventors, consumers and very proud owners of that most refreshing of summer drinks, the Frappe.

You would think that being Greeks, their coffee of choice would be the traditional Greek (or Turkish, depending on where you live) mixed in the small copper pot known as the briki and often strong enough to stand a spoon in, if you take into account what the older generation say about their ancestors’ coffee.

Today’s Greeks though are very much of the Frappe generation, with almost the entire population claiming to be fans of this frothy beverage. One could even go so far as to say that over and above all things, Frappe is the one thing that transcends all socio-political, economic barriers.

In all seriousness though, anyone who has ever been fortunate enough to spend any amount of time in either Greece or Cyprus during the long, hot summers that make the two countries so attractive, especially with their outdoor lifestyles, should know that the drink of choice to quench any thirst has to be the fabulous Frappe.

First, perhaps like most great things, the invention of the Frappe was through an act of desperate necessity and was actually born at the expense of a children’s chocolate drink. What happened was that two representatives of the Nestlé Company in Greece were at the 1957 Trade Fair in Thessaloniki, Greece. One of the representatives was showing his audience how to make a new children’s beverage, using powder, water and a blender. His colleague, Dimitris Vakondis, was desperate for a cup of coffee. In his anguish, and not being able to find any hot water with which to make his drink, he resorted to putting his instant coffee with cold water, and used the blender to mix it up. To his great surprise, he had made cold coffee with a lovely soft froth, which tasted good.

When you order your Frappe, you could even spare a thought for how the actual drink is prepared, and why it is vital to use the right kind of coffee to get the foam just right. Scientifically, when the spray-dried coffee is dissolved, it enables the creation of a thicker frothy layer at the top of the coffee where the tiny bubbles forming the froth are held together by the actual coffee solids, with the absence of oil making the mixture more stable, so the bubbles are supported and don’t collapse. Once the foam is created, a process of thickening takes place where water molecules are constantly pushed out of the froth so the bubbles then come close together, resulting in an almost solid foam. While the foam itself has no real effect on the actual taste of the coffee and drinkers consume the drink from a straw to avoid actual contact with the foam, the froth on top of a Greek Frappe is universally considered an integral part of the entire process.

The cold coffee beverage has become so popular in Greece, that it even gave rise to a popular book devoted to the practice and consumption of the national drink titled Frappe Nation. Described as a bilingual gift book, Frappe Nation is full of coffee facts and quotes from coffee professionals, social media stars and entertainment icons of Greek society. One of the quotes used in the book even describes the power of the Frappe, “the distance between glum silence and spirited chattiness can sometimes be measured by the length of a straw.”

While the publishing of a book celebrating some of the best and most popular coffee haunts throughout the entire Greek nation, including all the islands, may perhaps seem extreme, it really is indicative of the fact that Frappe is absolutely the ultimate Greek drink. While it may not be on the same ideological level as Plato and Aristotle, as you lounge back, gazing at the sparkling blue Mediterranean Sea, sipping your Frappe, you should acknowledge that it might even be the ultimate nectar of the Greek Gods.