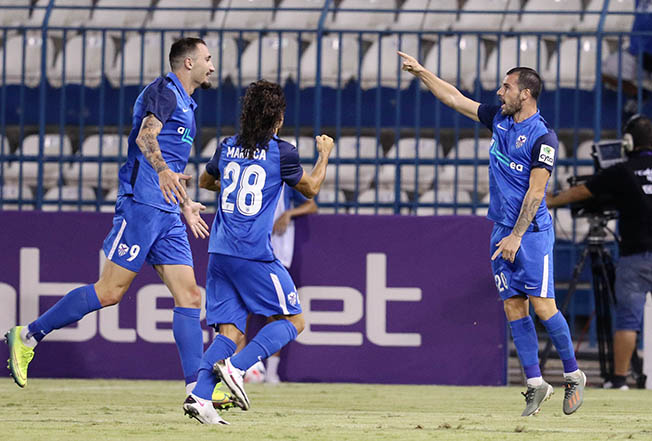 Anorthosis, who take on Nea Salamina on Saturday, failed in their request for a postponement so that they could attend an event about Varosha in the occupied area of Famagusta

The Cyprus football championship resumes this weekend following the international break, with the seventh round of games kicking-off on Saturday.

Opening the weekend is the game between AEK Larnaca and Doxa Katokopias. AEK will be seeking to bounce back from their unexpected loss against Enosis Neon Paralimniou and stay firmly at the top end of the table. The Larnaca club are third behind Omonia and Apollon with 10 points, but have played one game more than the two clubs above them.

Speaking before the game, AEK manager Joan Carrillo said that the international break was an opportunity for him to further bond with the players and instill his coaching demands.

“I had time these past two weeks to to learn more about the players, just like the players had time to get to know me better as well”, Carrillo said.
“I have a different coaching philosophy to that of the previous manager and it will take time to pass that on”, he added.

Later that day, Nea Salamina face Anorthosis for the Famagusta derby. There has been some controversy surrounding the game as Anorthosis asked for a postponement so that they could attend an event about Varosha in the occupied area of Famagusta.

However, it has been suggested that the main reason the club sought to reschedule the game was so that some of its international players could have a longer rest period. In any case, the request for a postponement has been rejected as the event is not held under the auspices of the Famagusta city council and is therefore not deemed an event the club’s players have to necessarily attend.

It will be interesting to see what Anorthosis manager Temur Ketsbaia will say in his post-match press conference, considering he has essentially refused to speak to the press in previous games. His ‘no comment’ and repeated ‘all good, all good’ remarks have earned him a fine from the Cyprus Football Association, as they constitute a violation of his obligation to speak to the press after each game has finished.

Both Nicosia giants, Apoel and Omonia, play on Sunday, with Omonia facing Ethnikos Achnas away and Apoel hosting Pafos FC at the GSP stadium.
Speaking to Cablenet earlier this week, Omonia attacking midfielder Eric Bautheac accepted that this season will not be easy but that it’s their duty as professional players to rise to the challenge before them.

“Last season was disappointing because we wanted to celebrate a title win with our fans”, Bautheac said.
“We started the new season well, made the major leap to the Europa League group stage, and are also competing for the domestic championship title. It’s difficult but this is what we are here to do”, he added.

Apoel meanwhile have had a mixed season so far and find themselves in eighth place with eight points, three points behind second-placed Omonia.
Apoel forward and Kosovar international Atdhe Nuhiu returned to Cyprus on Friday, a day later than expected, following a strike in Athens which caused the cancellation of several flights.

Speaking to online channel Digital, Apoel press officer Nektarios Petevinos acknowledged that Apoel’s start to the season hasn’t been as good as expected but that they’re working hard to improve moving forward.

“Overall I’d say we didn’t start so well, however, following the exit from the Europa League and the subsequent reallocation of our attention to domestic affairs, we focused on utilising the international break to work on tactics, fitness, and the further integration of all football players into the manager’s philosophy”, Petevinos said.

The two major Limassol clubs also play on the same day, with Apollon playing Olympiakos in Nicosia and AEL hosting Enosis on Sunday.
Apollon’s Esteban Sachetti has accumulated enough yellow cards already that he will be missing a game through suspension and manager Avgousti has decided to have the player available against Olympiakos and lose him against Salamina in round eight.

Speaking before the game, Apollon press officer Fanourios Constantinou said that the onus is on Apollon to take the win. “Olympiakos have shown they are a good side, but we see what we can do on our end”, he said.

“We are going to Nicosia to take the win. The stress and the pressure are on us to take the three points”, Constantinou added.
Meanwhile, AEL Limassol manager Dusan Kerkez mentioned the escalating concern stemming from the increasing number of Covid-19 cases. “It’s a difficult situation, we must all be careful”, Kerkez said.

On the game, Kerkez urged his players to give it all and highlighted the challenging season ahead. “It’s a strong league, we have to be fully prepared and give everything we have”, he stated.