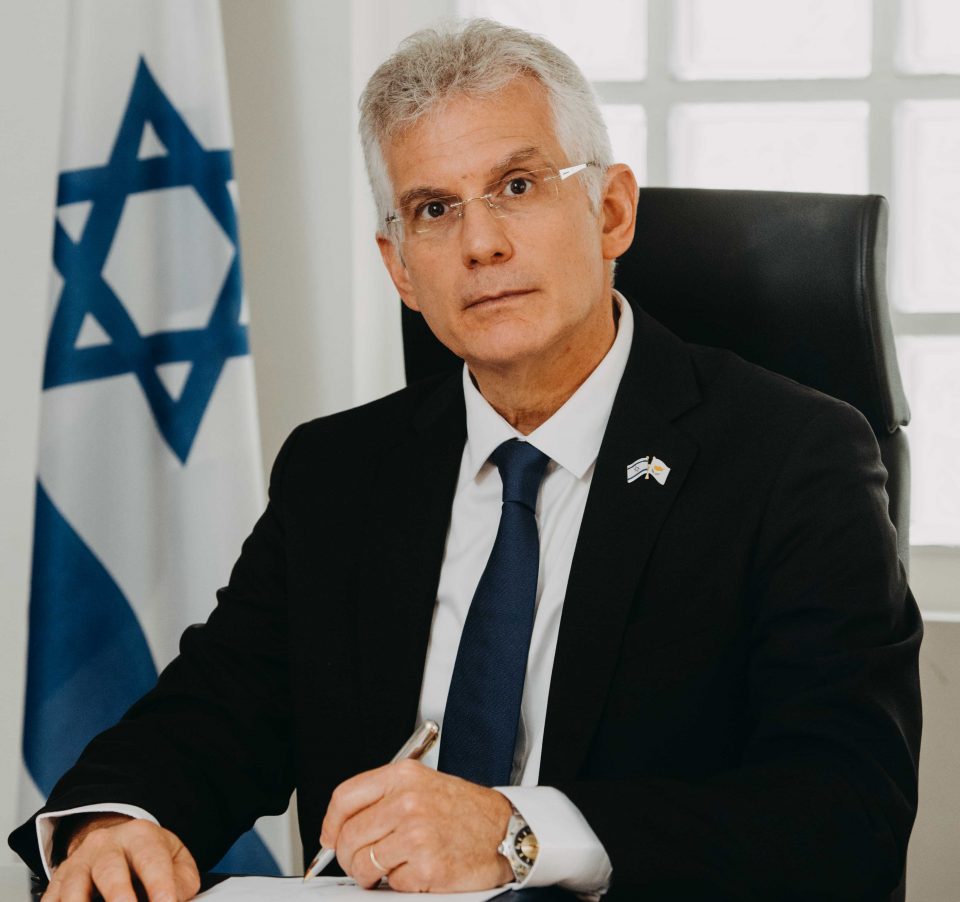 Israel and Cyprus are celebrating 60 years of diplomatic relations. To mark this occasion and in view of the current challenging times, I was particularly happy to present to the President of Cyprus, Nicos Anastasiades, a work of art symbolising the hope of Israelis and Cypriots for health, prosperity and peace. I am looking forward to meeting many friends throughout Cyprus in order to celebrate together. To celebrate our shared history and more importantly to build the foundations for an even stronger bond for our common future.

Our two countries are bound by geography, friendship and democratic values. Historically, dating back thousands of years, there were important connections between the Jewish people and the island of Cyprus. In more recent times, between 1946 and 1948, Cypriots opened their hearts and helped Jews who survived the Holocaust in Europe and were deported to British colonist detention camps on the island. This was their last stop before they were allowed to continue their journey to join the national efforts to defend and build the state of Israel. This created an “alliance of the hearts” between the two nations.

Shortly after the independence of the Republic of Cyprus in 1960, Israel recognised Cyprus, diplomatic relations were established and Israel inaugurated its embassy in Nicosia. These relations were significantly upgraded in recent years. Israel and Cyprus built significant bilateral ties – an important strategic and economic partnership with tangible results.

In these challenging times, facing the Coronavirus pandemic, an important cooperation exists between our health professionals on finding medical solutions for Covid-19. There are also intensive exchanges to develop scientific and technological tools to enable life and economic activity to continue. In addition, Israel and Cyprus jointly collaborate on preparedness for other emergencies – such as firefighting or search and rescue operations. The direct open line between Cypriot and Israeli doctors has often helped save lives, such as the recent example of an urgent evacuation of a Syrian refugee baby needed for a live-saving heart surgery.

In the economic field, there are very significant opportunities for growing synergies between Israel and Cyprus. The significant quantities of natural gas found in the exclusive economic zones of Israel and Cyprus, as well as the potential for further finds, create an important basis for collaboration. We also attach growing importance to the development of renewable energy resources and energy efficiency. Joint projects in coming years will focus on solar and wind energy production, on Cleantech and on finding technological innovations to protect the environment and fight climate change.

More and more, we focus our efforts to bring Israel and Cyprus closed together in the fields of innovation and entrepreneurship. Building this link between our two countries can significantly contribute to our scientific institutes, to our economies and to create together new ideas, which will transform the lives of people. Beyond the official agreements, we cherish especially the joint training programs on start-ups and social entrepreneurship. Almost 40 Cypriots already participated in these trainings, which took place in Israel. We look forward to continuing developing joint learning opportunities for young Israelis and Cypriots. This will greatly contribute to Research and Development and will bring together the people behind the Israeli and Cypriot High-tech Ecosystems.

Tourism and travel also brought our two countries and people together in recent years. Just last year, in 2019, hundreds of thousands of Israelis enjoyed hotels, taverns and beautiful beaches throughout Cyprus, while tens of thousands of Cypriots enjoyed the beauty of Israel. Israelis and Cypriots, brought together by a cultural affinity, found new friendships. This year, we are facing a complex reality, which affects many people and businesses. Just the same, we continue our efforts to renew flights and tourism, while giving priority to health and safety. Our hope is that soon Israelis and Cypriots will be able to easily and quickly cross again the short geographical distance between the two countries.

The bilateral relations were complemented in recent years by the trilateral with Greece and an important cooperation with the United States. Especially important are the growing ties with like-minded Arab countries, such as our peace partners Egypt and Jordan, and with the United Arab Emirates and Bahrain, which recently established diplomatic relations with Israel. This historic development provides an opportunity also for Israel and Cyprus to further develop wider regional cooperation.

While we celebrate the 60th anniversary of our diplomatic relations, our common journey is still at an early stage. We face many joint challenges – such as in the fields of health, water, climate change, environment protection and more – buy working together is our biggest opportunity. As two neighbouring countries, connected by the Mediterranean Sea, Israel and Cyprus are strong and natural partners. A partnership based on our history and on a shared vision for stability, security, prosperity and peace. Together we can turn the challenges into new opportunities that will inspire the future generation.

Sammy Revel is the Ambassador of Israel to Cyprus

Our View: Populists and their knack of turning politics into theatre