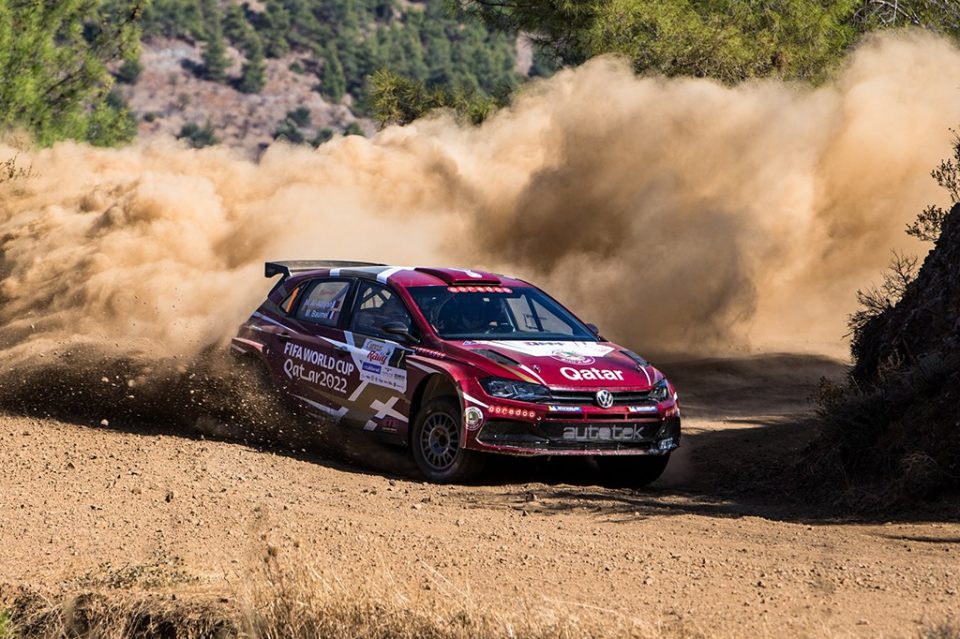 Much as expected, race favourite Nasser Al Attiyah of Qatar held a comfortable lead in the Cyprus Rally at the end of the first day’s competition.

Despite the lack of spectators, there were some exciting moments, showing that the drivers kept their focus even if they were missing the encouragement of the usual crowds.

Of the original 24 entries only 21 actually started the rally, and Cypriot driver Alexandros Tsouloftas left no-one in any doubt that he would challenge Al Attiyah for the top spot on the podium. He took the early lead in his Volkswagen Polo co-driven by Stelios Elia, clocking 9.7 seconds faster than the Qatari over the first special stage at Ayios Epiphanios. Third fastest through the stage was reigning Cypriot champion Petros Panteli in a Citroen DS3, but they were almost a minute off the leader’s pace. The top five was rounded off by Panikos Polycarpou in a Mitsubishi Lancer EVO IX and Christos Christodoulou in a Subaru Impreza STi.

Another fastest time for Tsouloftas on Stage 2 at Xyliatos and the gauntlet was well and truly thrown down. Nasser responded on stage 3 and – quite extraordinarily for an almost fifteen-kilometre stage – clocked exactly the same time as Tsouloftas: 15:47.9. They headed back to the midday service in Nicosia with a time difference of just 10.9 seconds. Al Attiyah was hoping to improve his times on the afternoon loop over the same three stages: running first on the road is always a disadvantage in Cyprus, where loose gravel is swept by the lead car, making grip very difficult, so with the tracks cleaned by the morning run we could expect some heated competition in the afternoon.

Sure enough, he took the race lead on stage 4, completing the test over a minute faster than the Cypriot and pulling out a very comfortable 50-second cushion between himself and Tsouloftas, who reported that he had axle problems, and, indeed, he retired on stage 5 leaving Al Attiyah over nine minutes clear of Yiangou, who moved up to second overall although his stage times were about 3 minutes slower on the second loop than in the morning, indicating that he, too, was having problems. On the last stage of the day he dropped back to third.

The day ended with the second run over the Asinou stage, won easily by Al Attiyah, and the crews headed back to Nicosia for the overnight halt. With only 76 km of special stages in Leg 2 it will be nigh on impossible for anyone to overhaul the Qatari unless he has a mishap; we can expect him to ease off the pace to ensure victory.

It was a short race for Charalambos Timotheou, who retired on SS1 due to engine overheating; another casualty on the same stage was Simos Galatariotis, who went off the road, while a similar excursion on Stage 2 saw the retirement of Costas Zenonos. Pantelis joined the list of retirements on SS4, a mechanical problem putting paid to his hopes, but most of the retirees indicated that they would start again on Sunday, having taken the requisite time penalty.

The second Leg will see the crews tackle special stages at Lefkara and Analiontas, each run twice.

Following the cancellation of Eneos Super Special Stage (S.S.S. 11) the rally 2020 will finish earlier than expected on Sunday at the Service Park in Nicosia. In line with the FIA’s restrictions for the COVID-19 pandemic, spectators will not be allowed to attend the Podium Ceremony.