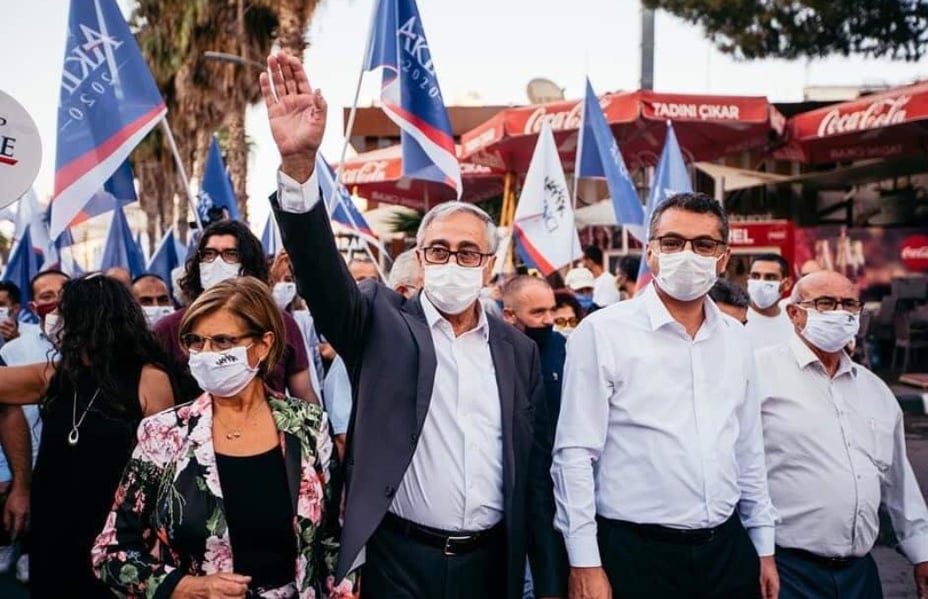 No certainty that Akinci will get all of Erhurman’s votes

Incumbent Turkish Cypriot leader Mustafa Akinci and ‘prime minister’ Ersin Tatar, the two candidates contesting the second round of the leadership election in the north today, are neck and neck as they approach the finishing post.

Even at this late stage, it remains difficult to predict which of them will take the prize.

In the week since the two rivals left the other candidates floundering in their wake to qualify for today’s decisive run-off, both have been making the rounds of the other political parties, seeking their support while also trying to galvanise the 42 per cent of the Turkish Cypriot community who stayed at home last Sunday to turn out and vote for them at the polls today.

CTP, the left-wing, main opposition party, whose candidate Tufan Erhurman received over 21 per cent of votes in the first round, decided unanimously on Tuesday to throw its weight behind Akinci.

On the other side of the fence, Ersin Tatar’s candidacy has been endorsed by the Rebirth Party of Erhan Arikli who received around 5 per cent of votes last Sunday as well as by the Democratic Party (DP) of Fikri Ataoglu. DP’s founder and former leader Serdar Denktash ran as an independent candidate, attracting about 4.2 per cent of the first round votes, announced his resignation from the party on Wednesday.

On his Facebook profile, Denktash accused the party leadership of failing to protect “its honour”, adding: “Since they are not doing it, at least I have to protect my honour.”

Sources close to Denktash say he and those politically affiliated with him will be supporting Akinci. However, his son Rauf Denktash, named after his grandfather the former Turkish Cypriot leader, has stated on Facebook that he plans to vote for Tatar.

HP, the political party of failed candidate in last week’s first round, Kudret Ozersay, announced that it is giving its members a free hand to decide which candidate they choose to support in the run-off.

Ozersay used social media within hours of the first round results being declared to announce that he was planning to review his political future given the very disappointing outcome of his campaign. Ozersay received close to 6 per cent of votes, a dramatic collapse when compared to the 20-plus per cent he achieved in 2015.

“A rough calculation of the political decisions taken by various parties shows that Tatar and Akinci have very similar numbers voting in their favour at present,” Umut Bozkurt, an international relations assistant professor at the East Mediterranean University in Famagusta, told the Sunday Mail.

She also suggested that the CTP decision to throw its weight behind Akinci does not mean that all who supported Erhurman in the first round will automatically transfer their votes to the incumbent. HP and DP supporters are likely to be similarly divided, she believes.

A lot depends on just how successful the two candidates are in their efforts to get out the vote for today’s vote.

Key in all this will be whether they can motivate those who stayed home last Sunday to venture forth and cast their ballots.

According to the experts, there is no detailed information as to the precise reasons why 42 per cent of the electorate abstained from voting, making it all the more difficult to analyse and ascertain just which candidate might benefit the more should those voters now emerge and participate in today’s decisive vote. A general consensus suggests that it was likely that the low turnout in the first round affected the right wing more.

“Some people are abroad and some in quarantine. Many decided not to vote. Among those, of course, both sides are represented. But on the whole, I think because of the pressure from Turkey and the opening of Varosha the left wing was more motivated to take part in the election. So it was the right wing constutuency that didn’t,” Bozkurt says.

Senior PRIO Cyprus consultant Mete Hatay has been analysing the voting patterns in the election so far. He says that generally it would seem that turnout was higher in villages inhabited by Turkish Cypriots than those where the population was dominated by people of Turkish origin.

“The discourse surrounding this election is too polarised and many voters of Turkish origin didn’t really want to get involved in it,” Hatay suggests.

“They feel that if they vote for Tatar they might alienate their Turkish Cypriots. At the same time, they know that the place is too small so if they vote for Akinci or somebody else everyone will know where these votes come from. That is why they stayed home.”

Throughout the week, activists from both campaigns have been visiting community leaders, analysing election results at the grassroots level and looking for ways to increase the level of participation among their potential supporters. Persistent phone calls and promises have been made to those who abstained on both sides.

“Everything is up in the air. We are awaiting some interesting developments in the north’s politics but it is very difficult to make any predictions right now,” according to Ahmet Sozen, professor of international relations at the East Mediterranean University.

“Both candidates have equal chances and, whoever wins, I don’t expect it will be by a huge margin. It’s not like in 2015 when Akinci had 65 per cent. This means that the polarisation we are experiencing now will continue and that is very worrying.”

Sertac Sonan, associate professor of international relations at the Cyprus International University, maintains the voter turnout for the run-off won’t be much different than in the first round.

“Probably the increase will be similar to what happened in 2015, when the difference between the first and second round was about 2 per cent,” he says.

Sozen believes the the current election is very much like a referendum in which Turkish Cypriots have to decide whether their future lies together with Greek Cypriots or that otherwise the federal solution to the Cyprus problem is dead.

“This election is critical,” she says. “If you look at what has been recently said and written about Cyprus in Turkey, it is apparent that Ankara is not very keen on the federal solution any more. Turkey’s foreign policy is changing and becoming more aggressive, so it shouldn’t be surprising if it becomes more hawkish in Cyprus as well. Many people say if they don’t support Akinci it is because they do not want to support federation. So, if Tatar wins, a federation might become very difficult to achieve.”

She also points out that many fear a victory by the right wing candidate would result in more blatant interventionism in the north’s internal affairs by Ankara.

“Even if Akinci wins, it is not going to be easy although maybe he can achieve the federal solution with more international support.”