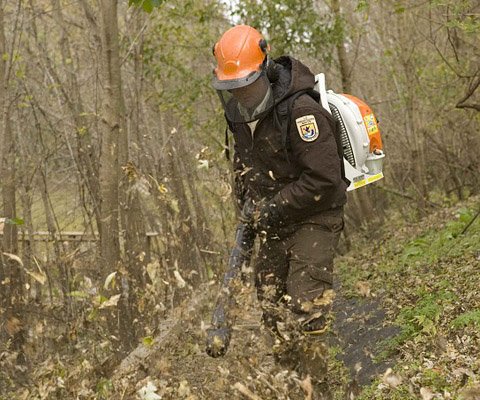 Time for some compassion even for those using leaf blowing machines

Panagia mou! If I hear another leaf blowing machine at 7am someone is going to hospital. Never in the evolution of horticultural processing has innovation been more unwelcome than this. Morning calm and tranquillity shattered by a bone-idle dolt disinterested in the disruption he’s causing to the balance of nature. I even saw a van with a picture of someone happily using one as an advertisement.

I’m sure this hasn’t escaped the attention of the outgoing House president and his friends who live in nice areas, as we all saw on the Al Jazeera documentary. Rather than dabbling in property and passports, perhaps they should have turned their attention to the scourge of national noise pollution. In their position I would have acted years ago to ban all use of leaf blowers and imprison any detractors. Alas my problem would have been that you can’t totally eradicate laziness and ignorance of the natural environment. All you can do is recognise it as a facet of human nature and from there try to temper and control it in an unruly individual.

Along with sloth, corruption and greed are framed in the seven deadly sins and as part of human nature as love, compassion and mercy. Without this genetic blueprint and the wisdom to balance it we’re not humans but empty vessels awaiting union with Elon Musk’s artificial intelligence masterplan.

The recent expose of Cyprus golden passports has spectacularly highlighted this self-evident truth. A glaring disconnect between the rigid compliance to centrally dictated sets of rules and regulations against individually established traits and ethics.

Cyprus’ economy and reputation will suffer unfairly because of these revelations. Professional services firms and commercially active individuals here (and everywhere) have responded to a tsunami of new regulatory procedures which have steadily increased since 9/11. Under the auspices of the “war on terror”, scrutiny has rightly increased on bank accounts, individuals, source of funds, police records, anti-money laundering and political exposure. This has caused a shift in corporate power from entrepreneurial led organisations to back office bureaucracy and administration sharing an increasing and growing footing.

The vast majority have responded positively to the new landscape in the spirit of a fairer future. But during the transition the price has been high for many innocent parties. We’ve seen bank failures paid for by depositors, bank account closures due to perceived concern over an account holder’s country and huge cost increases in regulatory compliance. We’ve seen the decline of cash which has been accelerated by Covid-19 and the consequent increase in centralised digital control of our money. We’ve seen draconian punishments for minor breaches of the rules. For the first time in the history of mankind the general public have been persuaded that tax payment is a moral, not a legal, issue. The British hoi polloi are currently waving their flaming torches at Amazon who only contributed a mere £300m to the system last year.

But through it all hopefully a cleaner world economy is emerging, less vulnerable to corruption and exploitation by the few. And that’s the rub, the vast majority of service professionals and individuals in Cyprus, along with counterparts in other countries, have responded to these changes. Not out of fear and subservience but because the majority of human beings are good, decent hard-working people who have their own internal checks and balances on their behaviour. They would be acting honestly and diligently within the laws anyway.

Throughout the world drug cartels are still operating, money laundering is rife, criminals are flourishing and politicians are getting caught out doing things they shouldn’t. This isn’t going to change by placing the onus of responsibility on the innocent majority. It needs the central will to compliment the weight of new world compliance with a basic understanding of their intended targets and basic human nature.

Corruption and greed are generally contained by individual values. Any moral imbalance is never going to be eradicated by administrative decree on its own. Perhaps the protagonists in the Cyprus Papers were in fact building evidence prior to filing and anti-money laundering report. Who knows?

So, let’s focus on love, compassion and mercy. These natural traits can’t be commandeered either. Perhaps leaf blowers aren’t that bad and the lazy slob pushing it around has got a bad back or had a hard week at home. I’ll give him a break if he’s back tomorrow.

France to expel 231 suspected extremists after attack on teacher