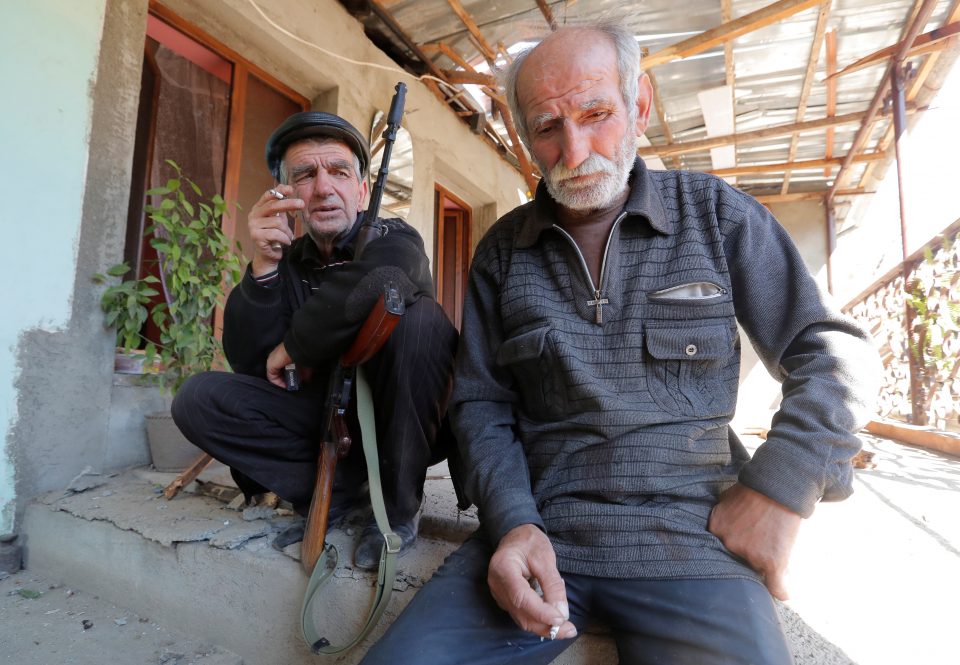 Local residents Alexei Agadzhanov with a rifle and Yuri Melkumyan smoke while showing a damaged house following recent shelling in the settlement of Shosh in the course of a military conflict over the breakaway region of Nagorno-Karabakh, October 17, 2020. REUTERS/Stringer

A new ceasefire in the mountain enclave of Nagorno-Karabakh was in jeopardy on Monday with Azerbaijan and ethnic Armenian forces reporting shelling and heavy fighting in some areas.

Azerbaijan said it had “neutralised” a missile fired by Armenian forces at an oil pipeline in Azerbaijan on Sunday, several hours after the ceasefire went into force, but Armenia denied the accusation.

The ceasefire was agreed on Saturday after an earlier deal brokered by Russia failed to halt fighting that has killed more than 1,000 people since Sept. 27 – the deadliest clashes in the South Caucasus since the 1990s.

The failure to stop the fighting has raised fears of a humanitarian crisis, and put new strains on ties between Turkey, which strongly backs Azerbaijan, and its NATO allies which want the conflict to end.

Russia, which has a defence pact with Armenia, could also be at risk of being sucked into a regional war.

Officials in Nagorno-Karabakh, a breakaway enclave of Azerbaijan that is populated and controlled by ethnic Armenians, said Azeri forces were shelling their positions in northern and southern areas of the line of contact that divides them.

They said Azeri forces had shelled civilian settlements including the town of Martuni and four villages – charges that were denied by Azerbaijan.

The Azeri prosecutor general’s office said Armenia had targeted a pipeline in the Khizi district of Azerbaijan, more than 300 km (186 miles) from the conflict zone, on Sunday afternoon.

The pipeline, which carries oil to Novorossiisk in Russia, was not damaged but some missile fragments fell about 250 metres (820 feet) away, it said.

The ceasefire brokered in Moscow earlier this month was aimed at letting the sides swap detainees and bodies of those killed, but it had little impact on the fighting.

The new ceasefire was announced on Saturday after Russian Foreign Minister Sergei Lavrov talked to the Armenian and Azeri foreign ministers by telephone.

In a fresh appeal for peace on Monday, Lavrov said it was vital to stop the angry rhetoric around the conflict and added: “This does not require any great effort.”

Russia, France and the United States chair a body called the Minsk Group, which has attempted to help resolve the conflict under the umbrella of the Organization for Security and Co-operation in Europe (OSCE).

Turkey says their mediation has failed, and Azerbaijan wants a role for Ankara in peacemaking. Baku also seeks an Armenian withdrawal from Nagorno-Karabakh, but Armenia rules this out and accuses Azerbaijan of making a land grab in Nagorno-Karabakh.

Baku said on Saturday that 61 Azeri civilians had been killed and 282 wounded since the fighting flared on Sept. 27. It has not disclosed its military casualties.

Nagorno-Karabakh says 710 of its military personnel have been killed, and 36 civilians.