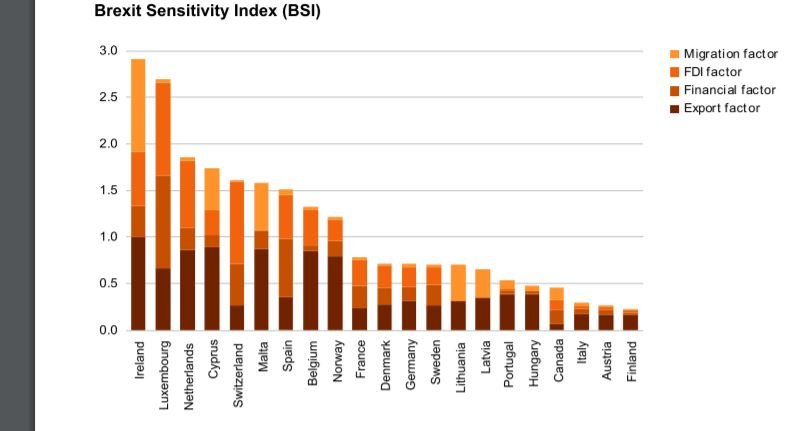 Cyprus has €2 billion in services exports to the UK.

With that said, there are some aspects of Brexit that offer opportunities, economists say.

Cyprus is among the countries with the most to lose in case of a no-deal Brexit, ranked fourth out of 21 on the “Brexit Sensitivity Index” released by credit agency S&P Global. Ireland is ranked first, then Luxembourg, and Netherlands is third on this ranking which looks at a series of economic factors.

The study cites this country’s historic, economic and financial ties with Britain, and notes that remittances from Cypriot expats in the UK accounted for .02 per cent of GDP in 2019.

“Brexit could create headwinds for its economy, given the importance of migratory, export, and financial links between the two countries,” the study notes.

The political view is that Cyprus is ready. “We would have preferred a different outcome for Brexit,” comments Harris Georgiades, Deputy President of DISY. “And, a few years ago, when Brexit was first decided, this result would have found us unprepared. Now both the public sector and the private sector are ready to face this challenge.”

Nonetheless, exports of services from Cyprus to the UK, which are accounted at about €2 billion per year according to the UK High Commission, are likely to suffer most.

“Cyprus’s exports of services will be hardest hit,” Demetris Koursaros, Assistant Professor in the Department of Commerce, Finance and Shipping at the Cyprus University of Technology told the Cyprus Mail in an interview.

“Once a no-deal Brexit is declared, then UK-Cyprus trade in services becomes subject to WTO rules. Negotiating a bilateral trade deal with the UK could take more than a decade,” comments Koursaros, “look at Canada which is still negotiating with the UK after nine years.”

Cyprus professional services businesses are uncertain of what to expect. “We are preparing for serious disruption,” warns Chris Boreham, group head of Business Development at the corporate services firm Highworth in Nicosia. “The previous regular flow of this kind of commerce with the UK will hit a brick wall.”

“What is sad,” he goes on, “is that this is happening at the same time that we’re dealing with Covid-19 issues. It could have an effect on economic recovery.”

For financial services, the situation is in flux. Paulina Dejmek-Hack, director of the European Commission’s task force for relations with Britain, said EU assessments on whether UK financial rules were “equivalent” to those in the bloc – which could allow some direct market access to continue from January – were ongoing.

It simply isn’t clear yet to what extent regular financial services activity will be affected – but it is certain that much of it will be.

But observers agreed that some opportunities will arise from the abrupt breaking off of trade relations between the UK and the EU.

“There is a real chance that many British firms will want to establish offices in the EU, and Cyprus will be a top choice destination for them,” Koursaros insists. “Cypriot businesses have always found ways to maintain legal trade, finding legitimate loopholes. It’s a bit of a Cyprus specialty.”