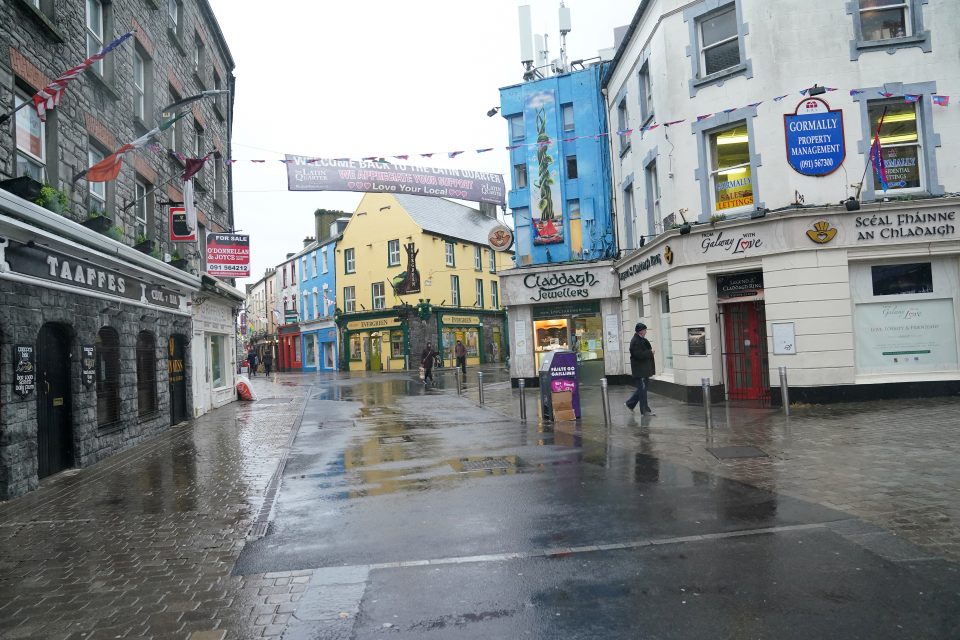 Ireland announced some of Europe’s toughest COVID-19 constraints, shutting non-essential retail, limiting restaurants and pubs to take away service and telling people not to travel more than five kilometres (3 miles) from their home.

Ireland imposed one of Europe’s longest lockdowns during the first surge in coronavirus cases and eased restrictions at such a cautious pace that pubs that only serve drinks in Dublin had not reopened by the time a rise in infections prompted a tightening of curbs.

This time, schools will stay open and essential services such as construction are allowed to continue, Prime Minister Micheal Martin said, as he moved the country to the highest level of restrictions, Level 5, for six weeks from midnight Wednesday.

Hotels may remain open, but only if their rooms are needed by essential workers.

“The evidence of a potentially grave situation arising in the weeks ahead is now too strong,” Martin said in a televised address, two weeks after rejecting what was then seen as a surprise call by health chiefs to move to Level 5, marking the first time ministers went against their advice.

Martin said the government’s aim was to return to Level 3 by Dec. 1. That would allow all retailers to reopen and restaurants to serve 15 customers outdoors. Even then, another lockdown could not be ruled out in 2021, he added.

“WE NEED A VACCINE”

On Sunday, Ireland broke its single-day record for new for the fifth time in nine days, and has the 12th highest rate among the 31 countries monitored by the European Centre for Disease Prevention and Control.

To cushion the blow, the government will increase the amount it contributes to coronavirus-related jobless payments and wage subsidies until Jan. 31. Last week’s budget, the biggest stimulus package in the history of the state, introduced much larger grants of up to 5,000 euros ($5,884.50) per week for shuttered or battered businesses.

The supports will cost about 1.5 billion euros for six weeks, based on a forecast that around 150,000 people will be temporarily laid off on top of the 40,000 let go in the last two weeks, Deputy Prime Minister Leo Varadkar said.

The jobless rate, including those on the emergency payment, stood at 14.7% last month. The finance ministry forecast that the economy could contract again next year if there is a prolonged period of stringent restrictions.

“We can do it this year, we can do it next year,” Martin said of financial support for the economy, adding, “We need a vaccine next year.”

Belgium could be returning to full lockdown if there is no reversal of the surge in COVID-19 infections and hospital admissions, a senior Belgian virologist said in a newspaper interview on Tuesday.

“We would then have to consider even more restrictive measures, which could resemble a lockdown like the one imposed in March and April,” Yves Van Laethem told La Derniere Heure.

Van Laethem, who addresses national news conferences on the COVID-19 situation, said only an eventual vaccine or effective treatment would overcome the pandemic.

As cases surge again in Europe, Ireland imposed some of Europe’s toughest COVID-19 constraints on Monday, while Wales is set to begin a two-week “fire-break” lockdown on Friday.

Health Minister Frank Vandenbroucke said on Sunday that the Belgian capital Brussels and the southern region of Wallonia were “close to a tsunami”, with a health situation worse than anywhere else in Europe.

He said a tsunami would mean authorities had lost control of the situation, meaning all non-COVID healthcare procedures would need to be postponed.

The country of 11 million people reported on Monday a daily average of 7,876 new infections in the week to Oct. 15, with an average 252 hospital admissions and 30 deaths.

At the peak of the spring coronavirus wave at the end of March, more than 600 were admitted to hospital in one day in Belgium.

Several Spanish regions toughened their coronavirus restrictions on Monday, seeking to curb a second wave of contagion that looks set to drive the country with Western Europe’s highest case load above one million infections this week.

Authorities in the northern region of Castile and Leon announced they would seal off the city of Burgos and nearby Aranda de Duero to all but essential travel from Tuesday night after infection rates in the area surpassed 500 cases per 100,000 people.

“We are in circumstances similar to those of March or April,” Burgos Mayor Daniel de la Rosa told state broadcaster TVE, recalling the beginning of the pandemic, when many Spaniards were confined to their homes to stop the spread.

Aragon, which was at the centre of several outbreaks linked to migrant agricultural workers over summer, introduced capacity limits at bars and restaurants and banned the sale of alcohol in shops between 10 pm and 8 am.

Regional health chief Sira Repolles said she was “very close” to imposing restrictions on movement in the regional capital Zaragoza.

And Catalonia, which last week ordered a 15-day shutdown of bars and restaurants, told 24-hour businesses they must shut at 10 p.m. and cannot reopen until 7 a.m.

Spain’s decentralised political system leaves the handling of the pandemic largely up to the regions, although the central government can intervene, as it did on Oct. 9 by declaring a state of emergency in Madrid to reimpose a partial lockdown on several million people in and around the capital.

Despite the increasingly severe clampdown, Spain has added nearly 38,000 cases since Friday, bringing the nationwide total up to 974,449. The death toll jumped by 217 to 33,992.

“It’s likely that in winter if we don’t take great care with precautionary measures the infection rate will increase again,” he told a news conference.