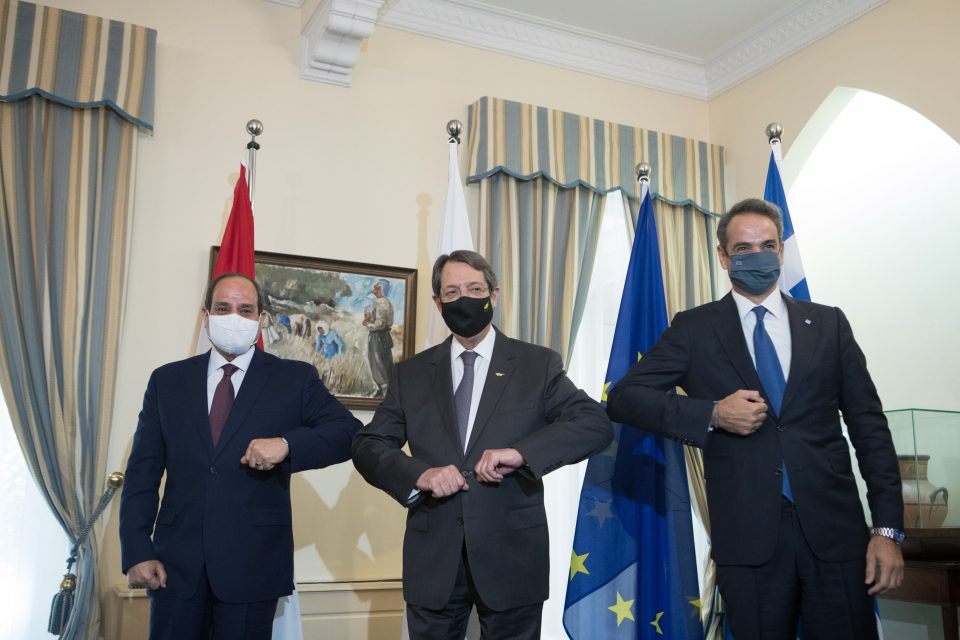 Greece urged the European Union on Wednesday to reconsider its customs union with Turkey in response to Ankara’s continued gas exploration in contested Mediterranean areas, deploring what it termed Ankara’s “imperial fantasies.”

“Turkey’s leadership has fantasies of imperial behaviour with aggressive behaviour from Syria to Libya, Somalia to Cyprus, from the Aegean to the Caucus,” he said.

The EU should also take note of Turkey’s ‘many violations’ of the EU-Turkey customs union accord, Mitsotakis said.

“It is not possible for a state, a third state, a country which is a candidate for EU membership, to be exempt from (customs) duties, to reap the benefits of the common market but at the same time threaten the eastern borders of the European Union,” he said.

Earlier, the three leaders condemned Turkey’s actions in Varosha and its illegal drilling and other operations inside the island’s exclusive economic zone and within Greece’s continental shelf.

In a declaration that followed the 8th session of their cooperation, the three countries condemned the opening of part of the fenced off town of Varosha and called on Turkey to terminate its provocative actions, comply with UN resolutions and to contribute constructively towards the resumption of reunification talks.

They also expressed their grave concern over the recent escalation within the maritime zones in the eastern Mediterranean and the increased militarisation of the region “that threatens the wider stability, peace, and security”.

“We strongly condemned Turkey’s illegal drilling and seismic operations in Cyprus’ EEZ/continental shelf, in marine areas already delimited in accordance with international law, including between the Republic of Cyprus and the Arab Republic of Egypt,” the declaration said.

“We also condemned the continuous violations of Greek national airspace and territorial waters in the Aegean Sea and Turkey’s illegal activities in areas falling within Greece’s continental shelf.”

The three countries stressed that delimitation of the continental shelf and exclusive economic zones should be addressed through dialogue and negotiations with full respect for international law.

“We call on Turkey to accept the invitation by Cyprus to engage in negotiations, in good faith and in full respect of international law, with the objective to reach an agreement for the maritime delimitation between their relevant coasts, or to submit the issue to the International Court of Justice.”

According to the declaration, the three countries expressed readiness to continue strengthening their cooperation through agreements on the exploration and transfer of natural gas.

“The discovery of hydrocarbons reserves can serve as a catalyst for regional stability and prosperity,” they said.

They also reaffirmed the importance of the establishment of the EuroAfrica project, an electricity interconnector between the grids of Egypt, Cyprus and Greece, that promoted cooperation and enhanced the security of energy supply, not only of the countries involved but also of Europe.

“The EuroAfrica Electricity Interconnector constitutes an important component of the strategy to accelerate the development of the Eastern Mediterranean Energy Corridor as a new alternative source of energy supplies from the region to the European Continent and vice versa.”

“We agreed on the need to address those escalatory policies that destabilise the region, and the need to coordinate with international partners to take appropriate measures to maintain regional security requirements,” Sisi said.

Paypal to use cryptocurrencies for buying, selling and shopping