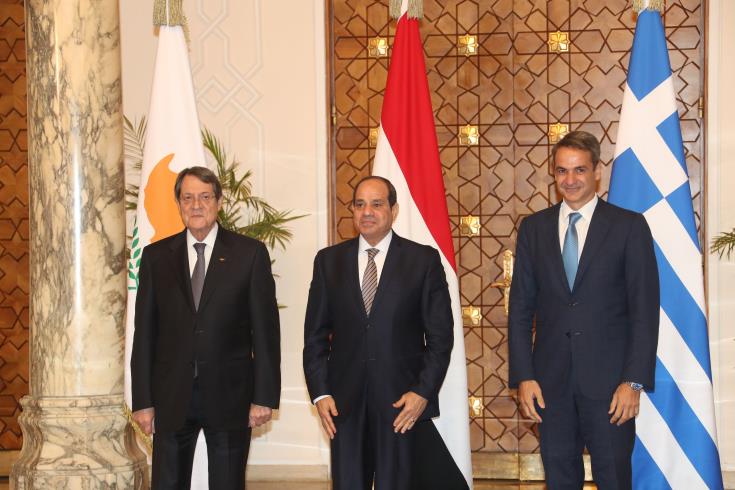 The Cyprus issue, Turkish provocations, energy, immigration, terrorism, regional issues and the coronavirus pandemic, will be at the centre of the 8th Trilateral Summit between Cyprus, Greece and Egypt being held in Nicosia today with the participation of the Presidents of Cyprus and Egypt, and the Prime Minister of Greece.

A tripartite meeting of the three leaders will follow and then they will take part in extended talks with the delegations of Cyprus, Greece and Egypt, in the framework of the Tripartite Summit.

At 12.45 pm (local time) the three leaders will make statements to the media. After that, the President of the Republic will host a lunch in honour of the President of Egypt and the Prime Minister of Greece.

Deputy Government Spokesman Panayiotis Sentonas said on Tuesday that the coordination, deepening of cooperation and forming of common positions between Cyprus, Greece and Egypt sends messages in every direction regarding the determination of the three countries to work together for peace and stability in the region.

Sentonas has said that the summit takes on special significance because it is being held in a period of Turkish actions and provocations, which affect the three countries and the broader regional security.

On the summit’s agenda is the continuing Turkish aggressiveness regarding explorations within Cyprus’ exclusive economic zone and the decision to open the coastal front of Famagusta in violation of UN resolutions.

The Cyprus issue will also be a main topic. Sentonas said President Nicos Anastasiades will refer to the latest developments and express his readiness and determination to respond immediately to a fresh initiative by the UN Secretary General for a Cyprus settlement.

Other issues on the agenda are the results and progress of the trilateral mechanism in current and new areas, energy, immigration, terrorism, regional issues such as the situation in Syria, Libya and the peace process in the Middle East, and the coronavirus pandemic.

A joint declaration will be adopted, expressing the views of Cyprus, Greece and Egypt.