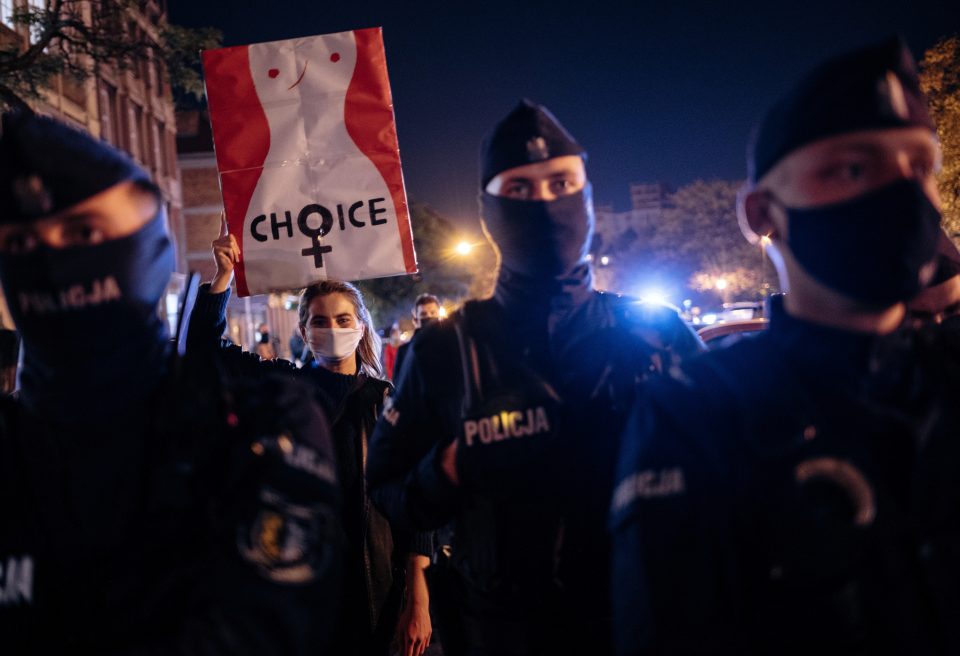 A woman holds a placard during a protest against imposing further restrictions on abortion law, in Gdansk, Poland October 23, 2020. Bartosz Banka/Agencja Gazeta/via REUTERS ATTENTION EDITORS - THIS IMAGE WAS PROVIDED BY A THIRD PARTY. POLAND OUT. NO COMMERCIAL OR EDITORIAL SALES IN POLAND.

Thousands protested across Poland on Friday despite coronavirus restrictions, a day after the top court banned almost all grounds for abortion in the Roman Catholic country.

The Constitutional Tribunal’s ruling on Thursday to ban abortions due to foetal defects ended the most common of the few legal grounds for abortion, and set Poland further apart from the European mainstream.

Thousands took to the streets in Poznan, Warsaw, Wroclaw and Krakow, footage from private broadcaster TVN showed. “Women are not respected in this country. No one is listening to us,” said Magda, 34, who showed up to a protest in the northern city of Gdynia.

Over a thousand gathered near Law and Justice (PiS) ruling party leader Jaroslaw Kaczynski’s house in Warsaw for a second night of protest on Friday, carrying banners that read, “You have blood on your hands.” Dozens of police were present wearing riot gear.

“I was initially scared but I figured, too bad if I catch coronavirus. I’m scared for my daughter, but I think we don’t have a choice. Someone took this away from us against our will,” said Emilia Gwiazda, 46, who attended protests in Warsaw.

Attempts by PiS to curb the already very restrictive abortion rules in recent years had ignited a public outcry, forcing the party to roll back legislative proposals.

Poland will close restaurants and bars for two weeks and limit public gatherings to five people across the country from Saturday, Prime Minister Mateusz Morawiecki said, after new coronavirus infections hit a daily record of more than 13,600 on Friday.

PiS lawmakers welcomed the Constitutional Tribunal’s decision but rejected accusations by the opposition that it had influenced it.

Conservative values have taken a more prominent role in public life since PiS took power five years ago, and access to abortion has declined even without legislative curbs as some doctors refused to perform the procedure on religious grounds.

After the tribunal’s decision goes into effect, women will be able to terminate a pregnancy only in the case of rape or incest or a threat to their health.

Zaneta, a 30-year-old woman from a small town in southern Poland who carries an extremely rare genetic disorder, terminated a pregnancy on Tuesday after the baby was diagnosed with severe malformations.

The ruling came as a shock to her.

“I had no idea you could do that,” she said. “This ends any chances for me to have another child.”

Britain wants to allow people to travel again but…