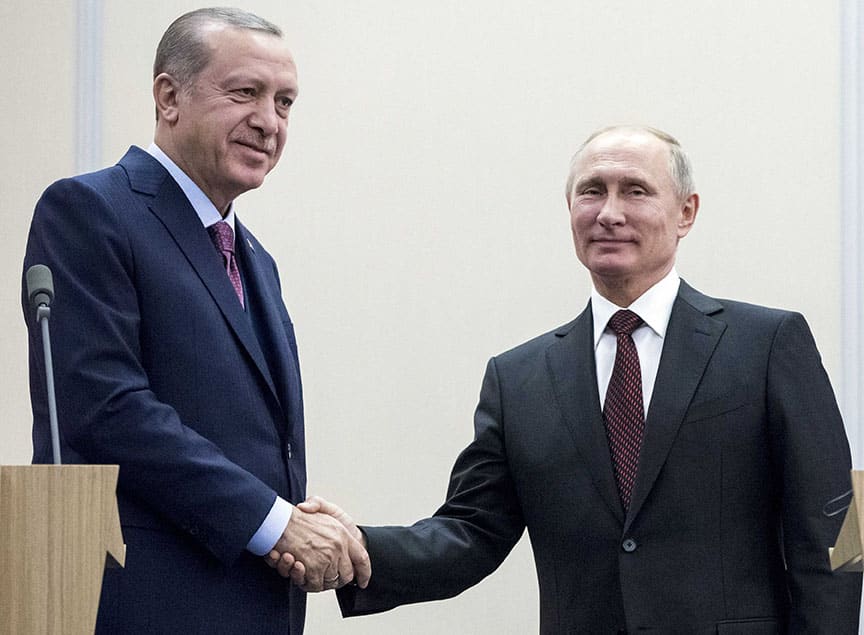 After his address at the opening of the 17th annual meeting of the Valdai Discussion Club, via videoconferencing, Putin took questions from participants.

Among other things, he was asked about the situation in Nagorno-Karabakh but also the disagreements between Turkey and France as regards Ankara’s activities in the eastern Mediterranean.

Putin said Russia has never abused tensions between Nato allies and that he was certain the two countries would sort things out among them.

“We have steadfast good, promising relations with France,” he said, adding: “Turkey is our neighbour; I can go into great lengths explaining Turkey’s importance for Russia,” he said.

He added that he did not believe they needed any mediators.

Turkish President Tayyip Erdogan, he said, “however rigid his stance might seem, he can be flexible.” He said he believed the situation would be resolved.

Relations between the two countries have been tense since last summer when France accused Turkish ships of targeting one of its warships in the Mediterranean, which Ankara denied. Soon after France suspended its role in Nato’s Operation Sea Guardian, accusing Turkey of violating an arms embargo against Libya.

Putin also said trade relations between Russia and Turkey are to the tune of more than US $20bn “and I know Turkey is very much interested in continuing this cooperation.”

“I’m aware President Erdogan is pursuing an independent foreign policy regardless of any external pressure, but within a very short timeframe we managed to complete the TurkStream pipeline project even though it has taken us years and years with Europe to do the same,,” he said, referring to the Nord Stream 2 gas pipeline from Russia to Germany.

“Europe so far has been unable to show some modicum of independence and sovereignty to complete a very profitable project, Nord Stream.”

He added that Erdogan understands Turkey’s national interests. “They needed it and they did it, the same applies to other fields such as military and technical cooperation,” he said, adding that Turkey decided they needed modern air defence systems and that the best systems in market at the moment were Russia’s S-400 missile defence system. Turkey’s decision last year to purchase the S-400 system from Russia had angered the US but also its Nato allies.

There was a brief mention of Cyprus after Putin said he was aware of Turkey’s position of the non-recognition of Crimea as part of Russian territory, and that they do have many differences of opinion with Ankara and particularly with regard to the situation in the Caucasus.

After calling sanctions by the US and EU on the issue of Crimea an “absurdity”, he said at least Erdogan’s position was consistent. “He does not recognise Crimea, or Nagorno-Karabakh.” This prompted a comment from one of the participants that Erdogan does however recognise ‘North Cyprus’.

Putin agreed that Erdogan does recognise ‘North Cyprus’ but that Turkey does not object to a reunification of the island but was setting terms on how this will be achieved.

Putin said Russia disagreed with Turkey on Nagorno-Karabakh, but both countries needed to find a compromise.

Fighting that broke out on September 27 over Nagorno-Karabakh, a breakaway territory which is within Azerbaijan but is controlled by ethnic Armenians.

Azeri forces, bolstered by weapons bought from Turkey, say they have made territorial gains, including full control over the border with Iran, though Nagorno-Karabakh says its forces have repeatedly repulsed attacks.

Turkey has said it would send soldiers and provide military support for Azerbaijan if such a request were made by its ally.

Putin said Russia, which has a defence pact with Armenia, disagreed with Turkey on Nagorno-Karabakh, but both countries needed to find a compromise.

He also said he hoped that the United States would help Moscow broker a solution to the conflict.