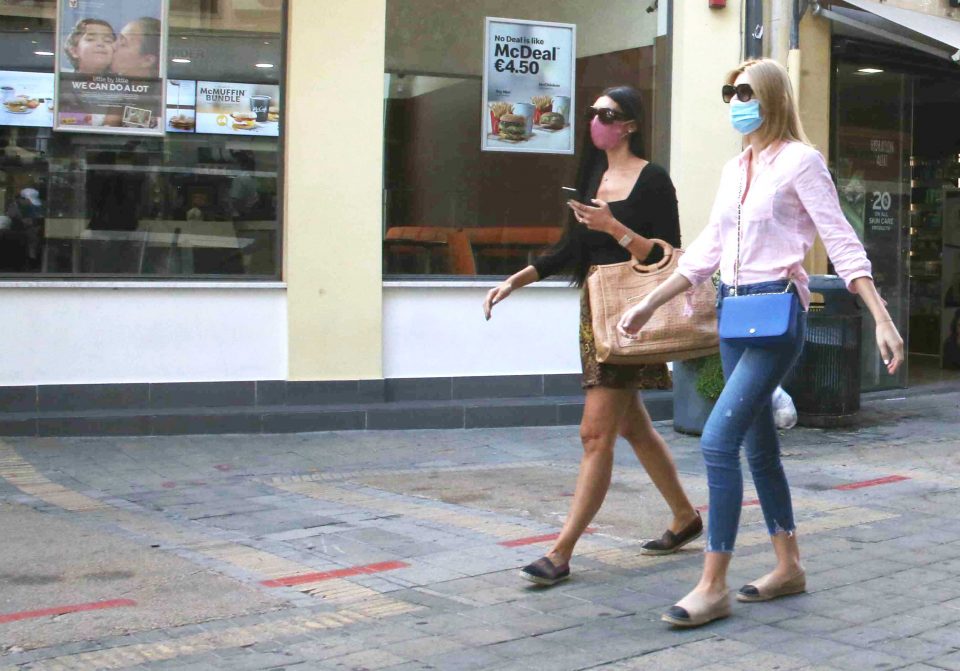 By Nick Theodoulou and Peter Michael

Authorities were forced to clarify on Friday what wearing a mask in the open air actually entailed as police initially said the decree applied to everyone even if out walking on their own, a statement they retracted later in the day even as another 160 cases were announced.

Warnings also came that if numbers did not fall, the curfews imposed on Limassol and Paphos would be implemented islandwide.

In also emerged on Friday that not all of the scientific team agreed with the blanket mask mandate. One source close to the team told the Cyprus Mail, it had been discussed previously and was on the cards if the situation became worse. Cases have surged to triple digits over the past week.

“It was discussed at an earlier stage and it was on the cards for some time later if there was a more generalised islandwide transmission,” the source said, referring to the spikes and extra measures such as a curfew imposed on Limassol and Paphos. “It came as a surprise,” the source added in reference to the cabinet decision on Thursday.

This was confirmed by Constatinos Tsioutis and Giorgos Nikolopoulos, members of the epidemiological team. Both said in an interview that the decision was political and not all of the team completely agreed on the issue.

Many others saw the move decreed by the government on Thursday as nonsensical to fine someone if they were  out walking alone with no one else around but police interpreted it literally, saying that was their job to enforce the law as decreed.

Police spokesman Christos Andreou told the Cyprus Mail early on Friday that the decree mandates masks be worn in all outside areas.

For the police, it appeared unequivocal: “It says outdoor areas, it doesn’t even specify public areas,” Andreou said.

However, he explained that the police would use their experience and judgement to determine genuine exceptions. When it comes whether a person walking down a street is exercising or not, he gave the example of a person walking with the appropriate shoes compared to a person wearing high-heels and then claiming to be exercising.

Later in the day, in an announcement, police said an individual walking alone, with a pet, or who was exercising outside in his neighbourhood or in a non-crowded park did not need to wear a mask.

Portugal when it issued an identical decree on Friday specified clearly from the outset that mask-wearing applied to busy places like city streets or wherever social distancing could not be guaranteed.

The announcement by Health Minister Constantinos Ioannou on Thursday by contrast led to widespread confusion, leaving officials on Friday scrambling to clarify.

“If a couple from the same household are walking in a park and there is no one nearby for 3-4 metres then they don’t have to wear a mask,” Margarita Kyriacou, health ministry spokeswoman, told the Cyprus Mail. “But if they are taking a walk in Ledra Street in Nicosia they do have to wear a mask because there are lots of people there,” she said. Kyriacou reassured that police had been instructed to be flexible where possible.

The other main point of confusion has been over what the policy of mask-wearing is at restaurants, bars and cafes. Essentially, when you are sat at the table you do not have to wear a mask.

But you do have to wear a mask at all other times: when getting up to go to the toilet, to greet someone at another table or upon entering or exiting the establishment.

Epidemiological team member, Mario Koliou told CyBC on Friday night that currently half of all positive cases every day were coming from Limassol and many also from Paphos.”

However, she added that all districts had seen spikes even some were bigger than others.

“If the situation continues, then these measures will be the same for all of Cyprus,” Koliou said, referring to Limassol and Paphos.

Dr Petros Karayiannis, Professor of Microbiology/Molecular Virology at the University of Nicosia Medical School, also expressed concern on Friday. He thought it was because health protocols were not being strictly observed.
“We are talking about 900 active cases of the virus, maybe even more.  There are also asymptomatic persons who pose great risk and have not been identified since it is more the symptomatic patients who come for testing. But we must definitely have asymptomatic ones because at the moment we are seeing a reversal of the situation we had in the Summer, where we had 40 per cent of the cases due to asymptomatic people. At the moment, however, 70 per cent of our cases have symptoms “, he noted.

He said that in the next ten days we should have a gradual but significant drop of cases, otherwise, he said, the measures taken in the districts of Limassol and Paphos would be applied in other districts as well.