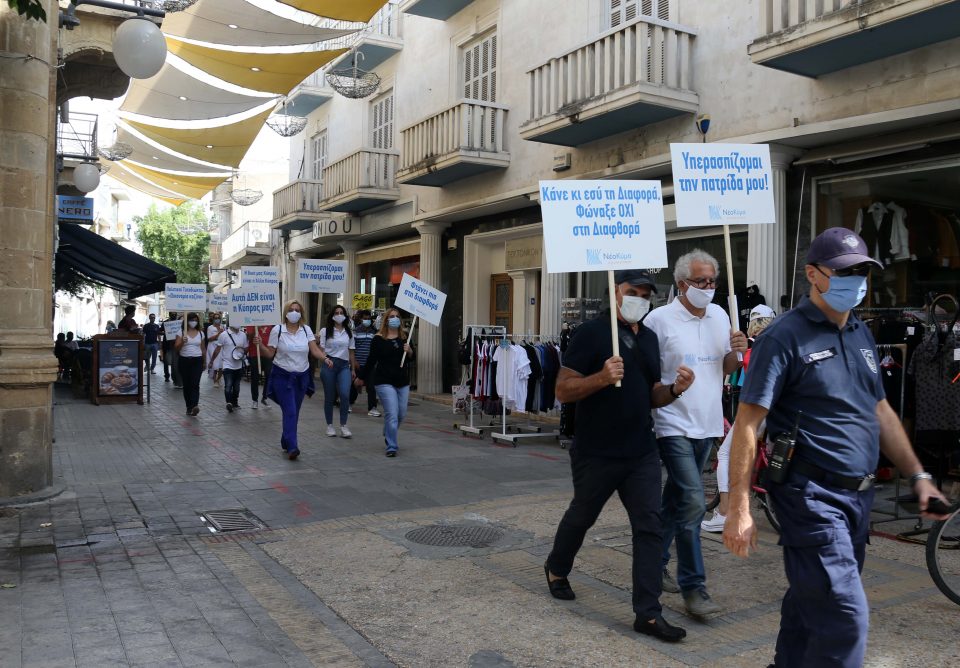 A protest was held in the centre of Nicosia on Saturday against government corruption, following the exposure the citizenship by investment scheme.

The protest by Neo Kima (New Wave) group follows similar demonstrations, one held by the Green Party on Friday outside the parliament.

The Greens called for the current government to resign and for the parliament to be dissolved, following the scandal.  MPs voted against it.

At the protest on Saturday, a few dozen people marched to Eleftheria Square holding signs saying ‘This is not my Cyprus,’ in direct reference to the Al-Jazeera video, which showed lawyer Andreas Pittadjis saying he could change the name of a person on a passport easily in Cyprus.  The journalist asked him, ‘You have done this before?’ and Pittadjis responded, ‘Of course I have. This is Cyprus.’

The phrase has since become a catchphrase during anti-corruption protests.

Speaking at the event on Saturday, former University of Cyprus Rector and member of the coordinating committee for Neo Kyma, Contantinos Christofides said corruption needed to end on the island, and with just two resignations, those of House Speaker Demetris Syllouris and Akel MP Christakis Giovanis,  the problem of corruption was not nearly solved.

“Developers cannot run our country,” he said commenting on plans to try and have citizenship by investment scheme continue in some manner.

“All Cypriots must realise that in this country there is not only the wall of occupation.  But, there is another wall built by the political system, which separates its people into privileged and non-privileged,” he said.

He added it was a shame when people resign from their positions under conditions that still allow them to receive their full pensions, have drivers, and other benefits.  This was in reference to Syllouris.

The former house speaker will also get to keep the service limo – whose expenses will be footed by taxpayers — a security detail, and €3,000 per month for a secretary whom he does not need to employ.

He will also be receiving around €5,000 per month as pension.

Commenting on the movement’s plans to fight corruption, Christofides said they would continue to protest, and will increase their demonstrations and they are cooperating with other groups calling for the an end to corruption.