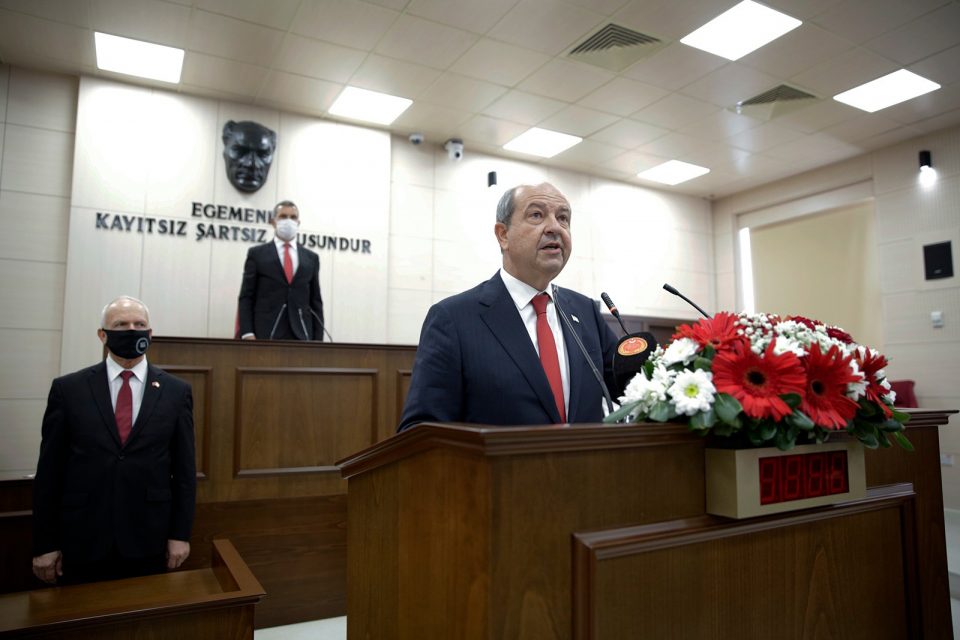 Nationalist Ersin Tatar’s victory in the north’s “presidential” election last Sunday has stirred up a hornets nest of buzzing speculation about future prospects both for a federal-based solution to the Cyprus problem and for the north itself.

What are Turkey’s plans regarding the forthcoming five-party informal meeting to be convened by UN Secretary-General Antonio Guterres? Is the federal solution really dead and buried? What did Nicos Anastasiades really tell Turkey’s FM Mevlut Cavusoglu in Crans-Montana? Is Recep Tayyip Erdogan actually contemplating annexing the north?

These are just a few of the many questions that veteran experts of the never-ending Cyprus problem are struggling to try and answer now that many of the long-standing status quo certitudes have been sent spinning on the roulette wheel of political fate. And experienced experts as they are, they cannily tell the Sunday Mail that definitive scenarios are not yet coming into view.

“The messages coming from Turkey are quite mixed at the moment,” according to Ahmet Sozen, professor of international relations at Famagusta’s East Mediterranean University, when speaking to the Sunday Mail.

“Yes, on one hand there are statements by Turkey’s vice president and the foreign minister as well as the new Turkish Cypriot leader that the federal solution is no longer on the table. On the other hand, we have Recep Tayyip Erdogan telling the UN General Assembly that he is prepared to accept any solution that will safeguard the safety and political equality of Turkish Cypriots. Right now I don’t think we can come to any definite conclusions. All we can say is that this informal meeting will give us some good indicators.”

Sozen believes that when the meeting does convene, discussions will not be confined to the Cyprus problem, that there’s a whole array of other issues jostling for attention, notably the recent escalation of tension in the East Med.

“On the surface, it will be Turkey trying to bring other solutions to the table and Anastasiades digging his heels in and saying he is only interested in the bizonal bicommunal federation. But behind those closed doors, there will be a whole stable of East Med horse trading.”

Sozen thinks this could place the Greek Cypriots in quite a difficult negotiating position but notes that if so, Anastasiades has brought it upon himself.

“If he thinks that this will be a simple case of Turkey insisting on the two-state solution while he puts forward the federation, it won’t just happen. Turkey has an accumulated 600-700 years of foreign policy making, a strong army and some strong arguments… Greek Cypriots will have to go further than just declaring their willingness to support a federation, they will have to talk about the political equality and power sharing and some sort of security arrangements.”

According to Dimitris Triantaphyllou, associated professor of international relations at the Kadir Has University in Istanbul, it will be a different Turkey that comes to the table than the Ankara that has been involved in previous Cyprus problem negotiations.

Triantaphyllou points out how for many years Ankara’s approach to the issue was influenced by its shifting aspirations and prospects for EU accession. This is no longer the case.

“For Turks, the whole EU thing is over and done with — the EU is not wanted any more, the accession criteria cannot be met. So what has replaced the EU dream is a concept of a strong independent country that can fight on five or six different fronts simultaneously, one with a strong military industry. It is a country that is strategically reorienting itself towards Asia and wants to become one of the key poles of a new order.”

This, he maintains, is bound to change the dynamics at the negotiation table significantly.  “I think that the Europeans will have to understand that with this new dynamic and new approach from Turkey, even in terms of how Cyprus factors in the UN resolutions, the status quo might not be tenable any more,” Triantaphyllou suggests.

“Of course, Turkey still needs and interacts with the EU. It still has to sit down and negotiate. Hydrocarbons and an upgraded customs union with the EU can still be used as leverage. But the EU deal is no longer there as an incentive and this is affecting Ankara’s policy towards the Cyprus problem. There is a systemic change in the process and Turkey is evaluating all of this. It has to look at a bigger picture. And one of the questions that it is faced with is why it should go for a solution that might imply that it would have to be politically involved in Cyprus but not militarily.”

Triantaphyllou suggests that the Greek Cypriot leadership might be well aware of the change in Turkey’s attitude and that this might explain some of Anastasiades’ past actions, including his behaviour in Crans-Montana.

“Maybe Anastasiades pulled out of Crans-Montana exactly because of this — because he realised that this deal wasn’t tenable any more.  After all Turkey hasn’t changed overnight.

“Maybe he realised that the bicommunal bizonal federation would never function,” he speculates.

According to Turkey’s foreign minister Mevlut Cavusoglu, Anastasiades, on more than one occasion, told him that he might be considering a different solution than the BBF, including “a two-state solution, a decentralised federation or a confederation”. Needless to say, the Greek Cypriot side denies such exchanges ever took place.

“I think Anastasiades told Cavusoglu that he would rather accept the two-state solution than what was proposed in Crans-Montana because he knew he would never get his people to agree to it. I think Anastasiades was buying time, finding a way to leave Crans-Montana and focus on his re-election. The way Turkey wanted to read this message was that he wants the two-state solution but Turkey doesn’t know Greek Cypriot politicians.”

Another theory about the Cavusoglu-Anastasiades exchange comes from a source in the north who also believes that it took place but that Turkey may have taken the latter’s words too literally.

“This exchange is one of the reasons they didn’t want [Mustafa] Akinci any more. They knew Akinci would never agree to drop the federal solution in favour of the two-state one. But the problem is Turkey doesn’t really understand what Anastasiades meant and I don’t think he is ready to explain it to them either.”

The same source claims there is a detailed proposal written up by one of Anastasiades’ close collaborators that the President may have had in mind while talking to Cavusoglu.

“It is a complicated, long-term plan. Not just a two-liner. But Turkish politicians don’t understand how complicated Greek Cypriots can be. Right now, they want to evaluate what Anastasiades had in mind and whether they can work with him on that”, the source concluded.

Rumours that the President of the Republic might be secretly considering the two-state solution have been circulating around the island since the failure of the Crans-Montana talks in 2017. Yet the experts are quick to point out that a Greek Cypriot politician could never dare put such an option on the negotiating table and not risk ruining his political career in the process.

“No Greek Cypriot politician can negotiate a partition deal,” Hubert Faustamann, professor of history and international relations at the University of Nicosia, says matter-of-factly.  “Partition has to be imposed on him or it has to be seen as having been imposed on him. I don’t think Anastasiades has the political capital and the political will to negotiate partition.”

Faustmann believes that the tensions in the East Med will gradually de-escalate and that Turkey and Greece will solve their differences regarding the maritime borders. He is not so optimistic when it comes to the Cyprus problem.

“I have always believed that Turks are happy with the status quo here because they know that time works in their favour. Now they feel more in control of the north than ever and they know that in the next elections they will be calling the shots. As for the future, given the migration from Turkey into the north and the latest results, soon Turkish Cypriots will have no chance to win against the candidate favoured by Ankara.”

However quickly that demographic shift may come to dominate the north’s electoral scene, Faustmann maintains that Turkey is unlikely to make a move on annexation anytime soon, although he cautions about Erdogan’s volatility.

“Why should they annex the north? Turkey is winning this confrontation anyway. Of course, one cannot exclude it. If Erdogan needs to score some points with nationalists on the domestic front, we don’t know what he might do. Of course, such a scenario can cost Turkey dearly.”

Triantaphyllou is less sanguine and sketches a scenario in which Turkey’s pressing domestic issues just might give rise to a push for annexation.

“In Turkey there is a direct correlation between internal issues and external policies. The next Turkish elections should be in 2023 but, since the country’s economy is getting worse, there is a talk that Erdogan might decide to hold the elections sooner. So if he goes into the elections needing a 3-4 point bump, he might use annexation to achieve just this.”

Sozen doesn’t necessarily disagree with this take, acknowledging that no-one can read the mind of Turkey’s president.

“He is capable of taking steps that we consider unthinkable and can go from one extreme, such as striking a deal on Cyprus with Greek Cypriots, all the way to another, such as integrating the north into Turkey. Of course, such an integration would be done step-by-step: Tatar elected as President, strong UBP-dominated government, more citizenships given to mainland Turks, mainstream media debate on annexation and reforming the TRNC, forming a confederation with Turkey, etc…”

Faustmann believes it would be easier for Ankara to annex the north if it first somehow manages to negotiate the two state-solution. Why?

“Because if the north was an independent state they could just organise a referendum and a sovereign state would decide. That’s why a partition might be a scary prospect for Turkish Cypriots.”

Finally, in talking to the Sunday Mail, Cengiz Aktar, the Turkish political scientist, journalist and writer, offers a more or less doomsday analysis of what he sees unfolding in the north.

“The reunification talks were dead and now they are dead and buried. The Turkish Republic of North Cyprus that they created in 1983 is dead too. Now Turkey rules the north and if there are still any problems they will simply annex it. It is over. The only game changer might be the election of Biden.”

If he is right that’s a grim obituary.

Your money, and how you sleep at night