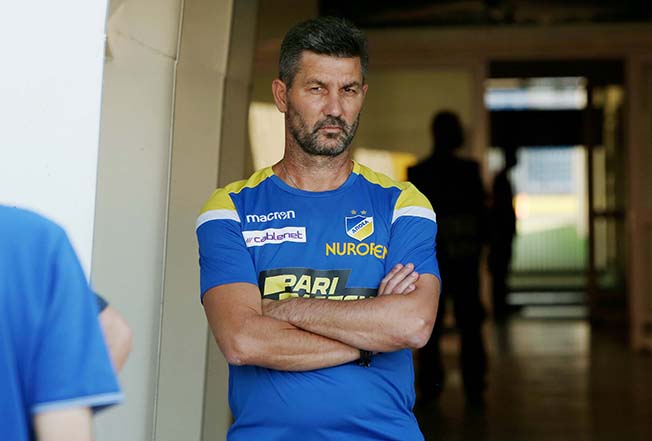 It is hard to deny that Marinos Ouzounidis’ record during his relatively short tenure at the helm of Apoel was poor. In 16 games across all competitions, he registered five wins, five draws, and six defeats

Apoel fired manager Marinos Ouzounidis on Monday following a string of insipid performances and disappointing results, including the club’s premature exit from the Europa League at the hands of Czech side Slovan Liberec, as well as a home defeat at ten-man Pafos FC in round seven of the Cypriot championship as well as Sunday’s 2-0 defeat at Anorthosis.

Ouzounidis’ dismissal came after much deliberation and a series of meetings starting on October 19, when Apoel’s board convened in an hours-long meeting to discuss the club’s next steps after the loss against Pafos.

One of the key reasons cited for Ouzounidis dismissal in leaked reports to the media is the low morale currently permeating the club, as well as Ouzounidis’ poor relationship with his squad.

This was Ouzounidis second stint as Apoel manager, having taken over from Norwegian Kare Ingebrigtsen on February 13 of the current year. Admittedly, he did not find Apoel in the best of states, with the club having a disappointing season last year.

However, despite sixteen new players joining the club and few being retained from the previous season, Ouzounidis did not manage to tangibly improve performances on a consistent basis, with positive displays being more of an exception to the rule rather than a defining attribute.

That being said, the lack of any real transparency in transfer dealings across most clubs in Cyprus makes it hard to attribute underperforming players to Ouzounidis in particular, as any player may have been decided upon by the manager, the board, agents close to the club, other intermediaries, or a combination of any of the aforementioned parties.

It is hard to deny that Ouzounidis’ record during his relatively short tenure at the helm of Apoel is generally sub-par. In 16 games across all competitions, Ouzounidis registered five wins, five draws, and six defeats.

During those 16 games, Ouzounidis’ side scored 18 goals and conceded 17 goals. Damningly, the Greek manager had eight games in which Apoel could not score a single goal. His five clean sheets aren’t exactly bad, but any defensive solidity has to be coupled with at least some attacking prowess.

The former coach of the Cyprus national team and AEK Larnaca, Ran Ben Simon as well as his Israeli counterpart and former Anorthosis coach Ron Levi, have been linked with the vacant post.

Whoever is appointed as the new Apoel manager will become the sixth manager at the helm of the Nicosia club in a two-season period, representing an incredibly high turnover of managers and pointing towards a lack of long-term planning and a need in rethinking the recruitment process.