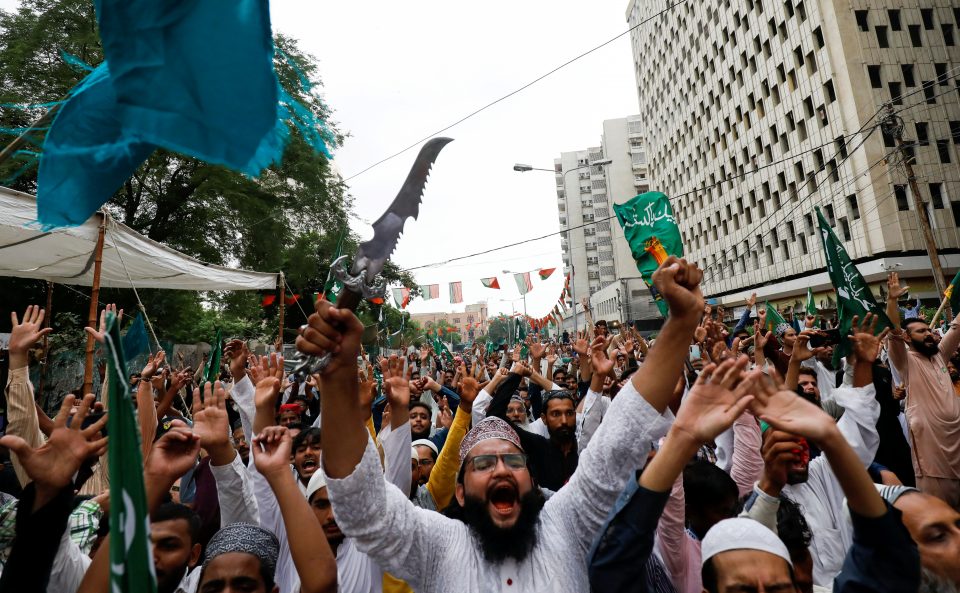 FILE PHOTO: A supporter of religious and political party Tehreek-e-Labaik Pakistan (TLP) waves a dagger, as he chants slogans with others against the satirical French weekly newspaper Charlie Hebdo, which reprinted a cartoon of the Prophet Mohammad, during a protest in Karachi, Pakistan September 4, 2020. REUTERS/Akhtar Soomro/File Photo

Pakistan Prime Minister Imran Khan called on Facebook to ban Islamophobic content on its platform, warning of a spike in radicalisation amongst Muslims, hours after he hit out at the French president for “attacking Islam”.

This came shorty after Turkey’s president Tayiip Erdogan said that Macron ‘needs treatment over attitude to Muslims. Soon after the French president recalled its amabassador in Turkey.

Khan, in an open letter posted on Twitter on Sunday, said “growing Islamophobia” was encouraging extremism and violence worldwide, especially through social media platforms such as Facebook.

“I would ask you to place a similar ban on Islamophobia and hate against Islam for Facebook that you have put in place for the Holocaust,” Khan said.

“One cannot send a message that while hate messages against some are unacceptable, these are acceptable against others,” Khan said, adding such a stance was “reflective of prejudice and bias that will encourage further radicalisation”.

In response, a Facebook spokeswoman told Reuters the company opposed all forms of hate and did not allow attacks based on race, ethnicity, national origin or religion.

“We’ll remove this hate speech as soon as we become aware of it,” the spokeswoman said in a statement, adding that Facebook had “more work to do”.

Facebook’s last transparency report for the six months to December 2019, showed that Pakistan was the source of the second highest number of requests to curb content after Russia.

A source with direct knowledge of the issue at Facebook told Reuters that the most requests for the removal of content relating to Islam came from Pakistan, exceeding other Muslim-majority countries.

Facebook traditionally complies, as not doing so would be to break Pakistan’s laws, the source said, adding that authorities would often send dozens of links at a time and demand they be taken down.

In his letter, Khan also referred to the situation in France, where, he said, Islam was being associated with terrorism.

Khan’s comments came after Macron paid tribute to a French history teacher beheaded by an Islamist radical who wanted to avenge the use of cartoons depicting the Prophet Mohammad in a class on freedom of expression.

Khan’s comments follow a similar broadside against Macron by Turkish President Tayyip Erdogan, after which France recalled its ambassador to Turkey.

Pakistan and Turkey share strong ties, while Khan and Erdogan have developed a close relationship – particularly on the topic of Islamophobia.

Khan’s letter to Facebook and comments on Macron come as he faces pressure from a newly formed coalition of opposition parties seeking to oust him.

The cartoons of the Prophet Mohammad, first published in 2005 by Danish newspaper Jyllands-Posten, have long been a sensitive topic among Muslims, stirring protests in Pakistan and elsewhere.

Tens of thousands of people protested in Pakistan last month when the cartoons were republished by the French satirical weekly Charlie Hebdo.

Khan’s government has subjected a number of social media apps to intense scrutiny and banned some for content authorities deemed obscene or immoral.