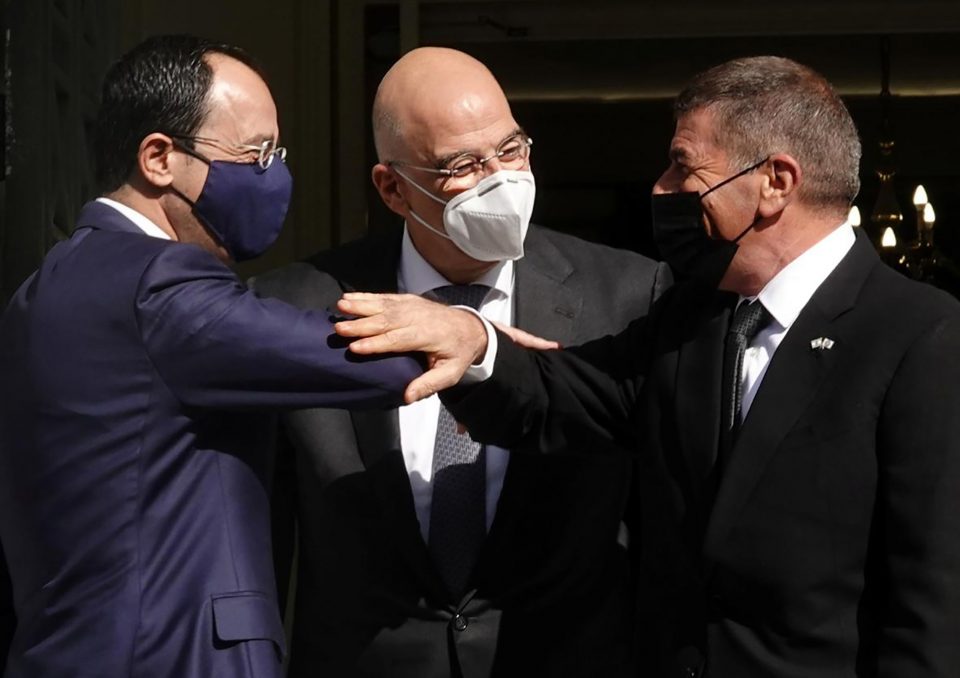 Turkey is the only threat to stability in the Eastern Mediterranean, Foreign Minister Nicos Christodoulides said on Tuesday after a trilateral meeting with his counterparts from Greece and Israel in Athens.

“While a series of positive developments and actions aimed at achieving peace and security in the region are underway, Turkey plays the role of the exception, with a series of illegal actions that result in tensions escalating,” Christodoulides said.

“Turkey’s illegal actions are evident not just in Cyprus and Greece, but also in Syria, Libya, Iraq, and beyond,” he added.

Christodoulides said he and the Greek foreign minister briefed each other on the continuous Turkish provocations in the wider Mediterranean region and especially in Cyprus’ exclusive economic zone (EEZ), where Turkey keeps drilling illegally.

The foreign minister also mentioned the recent reopening of part of Varosha, which he said “violated the UN’s efforts to restore stability in the country.”

“We urge Turkey to cease all its hostilities, so that talks can resume where they were interrupted in Crans Montana with the sole aim of reunifying Cyprus on the basis of the agreed solution framework, the bi-zonal bi-communal federation,” he added.

“The relations that Cyprus and Greece – two EU member states in the Eastern Mediterranean – with Israel, a neighbouring country with which we have historically close ties, are part of the wider efforts and initiatives being developed in region to promote security, stability and cooperation,” he said.

Under the deal, signed on August 13 under the supervision of the US, Israel and the UAE will establish full diplomatic relations with the UAE becoming the third Arab state, besides Egypt and Jordan, to fully recognise Israel.

“I want to congratulate my friend [Israeli Foreign Minister] Gabi Ashkenazi for having reached such an important deal, one that will undoubtedly have a deep impact throughout the Middle East and that represents an important step for the promotion of peace and stability,” Christodoulides said.

Further cooperation in the energy and tourism sectors were also discussed during the meeting, as well as the economy, with Christodoulides saying that the ongoing coronavirus pandemic has highlighted the importance of a close bond between the three countries.

“Now, more than ever, we realise that solutions to common challenges can only emerge through fruitful cooperation within a positive agenda.

“Only that way we can progress and achieve prosperity and stability.”