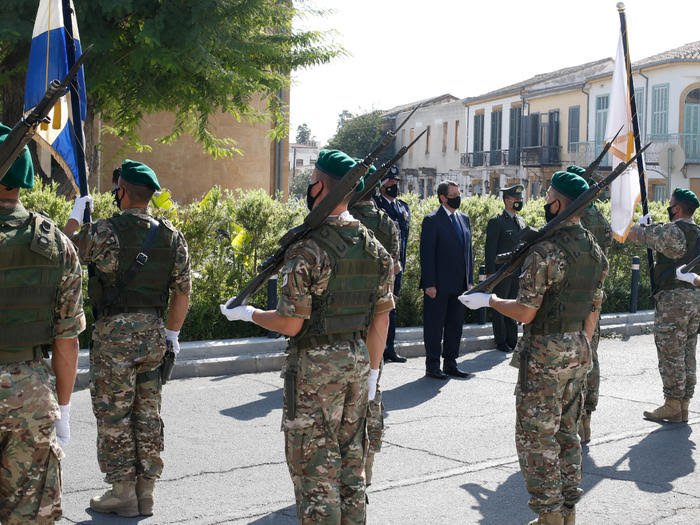 The 80th anniversary of Ochi Day, is very important not only for Greece but all nations that similarly face today fascist attacks, President Nicos Anastasiades said on Wednesday after attending a liturgy in Nicosia to mark the Greek resistance against the Axis powers and Greece’s entry to World War II.

The service at the Ayios Ioannis cathedral was led by Archbishop Chrysostomos.  Other state and military officials were present.

“This day is relevant with what is happening today and have exactly the same intentions as Nazism or (Italian dictator Benito) Mussolini’s fascism,” Anastasiades said after the service.

“There is no doubt that today is one of the most important in history, not only for Greece, but for all the nations that similarly face fascist attacks – and is due, mainly, to the unity and heroism shown by the Greeks,” he said. It was no coincidence, he said, that Britain’s wartime  Prime Minister Winston Churchill had said that from now on “Greeks don’t fight like heroes, heroes fight like Greeks.”

Asked whether Nicosia would support France’s request for sanctions against Turkey, he referred to the EU leaders’ decision to discuss measures at the European Council on  December 12, if Ankara does not comply,  which will cost it money.

“The (Turkish) attacks were not limited to the Republic of Cyprus and the sovereign rights of Greece. We have an outbreak of the phenomenon, also against France,” he said.

“Therefore, the responsibility was transferred to Turkey, with Europe, at the same time, taking explicit obligations towards the member states.”

In Paphos, celebrations started at 5.30am with the pealing of church bells while the Greek flag was raised at 7am at the Makarios Lyceum.

The flag was also raised early morning in Larnaca, at the Eleftheria Statue Square, by mayor Andreas Vyras and district officer Odysseas Hadjistefanou. Wreaths were also laid at the monument dedicated to World War II fighters.

In Limassol, after the liturgy, wreaths were laid at the Heroes monument at the square bearing the same name.

Diko said that all those who did not succumb to expansionism but instead fought and sacrificed for freedom and democracy, are a source of inspiration for Cypriot Hellenism.

“We must say no to all those who say that it is the Greek Cypriots who are responsible for the non-solution of the Cyprus issue and close our ears to the voices calling for submission,” Diko said. “History and the sacrifices of the heroes, demand that we do not accept an unjust, unsustainable, non-functional solution of the Cyprus problem, which will lead to the annihilation of the Cypriot Hellenism.”

Edek said that Greeks’ resistance to the Axis powers was an example which Greek Cypriots should follow and continue their own struggle until the island is truly freed.

“The continuation of the Republic of Cyprus and the struggle against everything non-democratic and fascist-Nazi, is the most practical tribute to those who fought for freedom and against fascism and Nazism” the party said.

For the Citizens’ Alliance, “the role played by Germany and fascist Hitler in 1940 is now held by Turkey and Erdogan.” The party said mankind and the great powers must avoid the mistakes made in 1940 and take immediate action to tame the trouble maker country,  Turkey.

“It is time for the great powers to abandon the policy of Ankara’s appeasement, as it is the same policy they unsuccessfully pursued in 1940 against Hitler. We stand tall and say a big ‘NO’ to Ankara’s expansionist plans.”