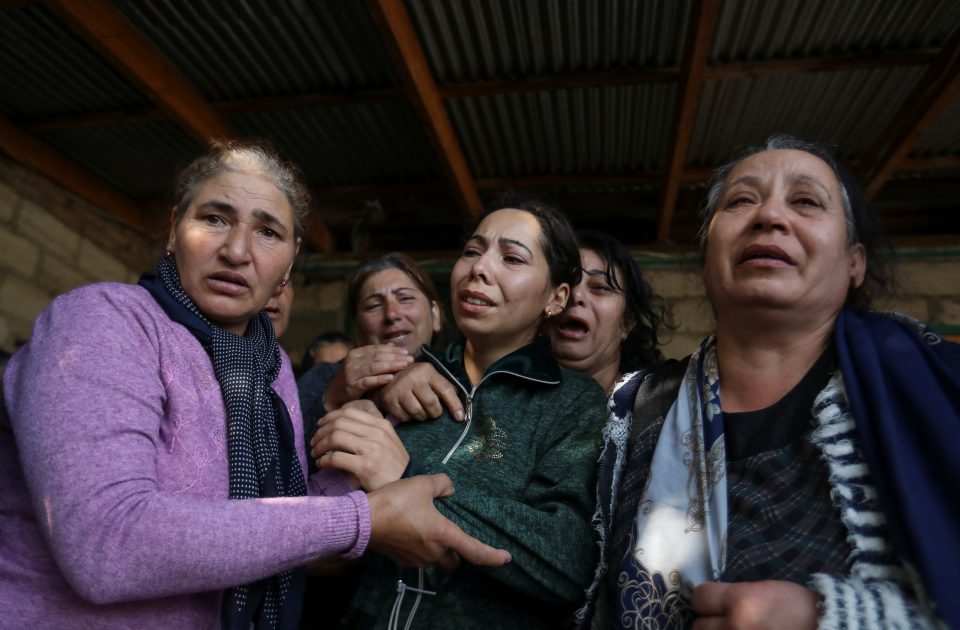 Mourners attend a memorial service before the funeral of 7-year-old Aysu Isgandarova, who according to relatives and local media was killed by recent shelling in the village of Garayusifli near Barda

Azerbaijan and Armenia accused each other of killing civilians by shelling cities in and around Nagorno-Karabakh on Wednesday, in an escalation of a month-long conflict over the mountain enclave that has defied three ceasefires.

Both sides denied each other’s claims.

The worst fighting in the South Caucasus for nearly 30 years has raised fears of a wider war that could suck in Russia and Turkey, an ally of Azerbaijan. It also poses a threat to pipelines carrying oil and gas from Azerbaijan to world markets.

Armenia‘s defence ministry also confirmed on Wednesday that Azerbaijan had seized the town of Gubadli between the enclave and the Iranian border, an apparent military gain that could make a diplomatic solution more difficult.

Nagorno-Karabakh is internationally recognised as part of Azerbaijan but is populated and controlled by ethnic Armenians. About 30,000 people were killed in a 1991-94 war in the region.

Azerbaijan rejects any solution that would leave Armenians in control of the enclave, which it considers to be illegally occupied. Armenia regards the territory as part of its historic homeland and says the population there needs its protection.

The prosecutor general of Azerbaijan’s office said 14 people had been killed in Barda. Azerbaijan’s defence ministry said earlier that Armenian forces had fired at settlements in the nearby Terter region and in Aghjabedi.

The Emergency and Rescue Service of ethnic Armenian-controlled Nagorno-Karabakh said shells had fallen on Stepanakert, the enclave’s largest city. It said a civilian had been killed by shelling in another city, Shushi, 15 km (9 miles) to the south.

The Nagorno-Karabakh defence ministry has recorded 1,068 military deaths since fighting erupted on Sept. 27. Azerbaijan has not disclosed its military casualties. Russia has estimated as many as 5,000 deaths in all.

The latest of three ceasefires was brokered in Washington on Sunday. U.S. President Donald Trump called the renewed fighting “disappointing” and Secretary of State Mike Pompeo urged both sides to pursue a diplomatic solution.

The OSCE Minsk Group, formed to mediate the conflict and led by France, Russia and the United States, is scheduled to meet the Armenian and Azeri foreign ministers in Geneva on Thursday. Turkey has demanded a bigger role in the group.

Russian President Vladimir Putin, in a phone call with Turkish President Tayyip Erdogan on Tuesday, expressed concerns over what he said was the increased involvement of fighters from the Middle East.

Erdogan said on Wednesday that Turkey was sincere in its efforts to solve the conflict and he believed in Russia’s sincerity. He said he had told Putin that Armenia was using Kurdish militants.