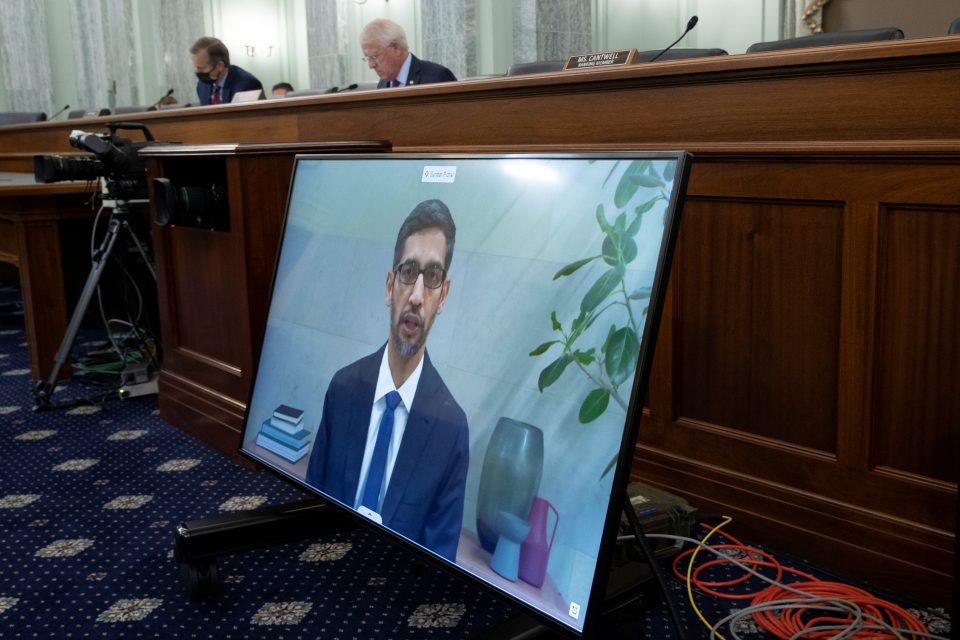 CEO of Google and Alphabet Sundar Pichai appears on a monitor as he testifies remotely during the Senate Commerce, Science, and Transportation Committee hearing

A U.S. Senate hearing to reform an internet law and hold tech companies accountable for how they moderate content quickly turned into a political scuffle as lawmakers not only went after the companies but also attacked each other.

Lawmakers are split on ways to hold Big Tech accountable under Section 230 of the Communications Decency Act – which protects companies from liability over content posted by users but also lets the firms shape political discourse.

The chief executives of Twitter Inc, Facebook Inc and Alphabet Inc’s Google called the law crucial to free expression on the internet.

A little over an hour into the hearing, the conversation turned into a heated exchange between senators of both parties.

Senator Ted Cruz went after Twitter’s Jack Dorsey after the CEO said Twitter has no influence over elections.

“Who the hell elected you and put you in charge of what the media are allowed to report and what the American people are allowed to hear,” Cruz said. Ahead of the hearing, the senator released a picture on Twitter titled “Free Speech showdown Cruz vs Dorsey” that showed him and Twitter’s Dorsey pitted against each other.

Democratic Senator Brian Schatz said he did not have any questions, calling the hearing “nonsense”.

“This is bullying and it is for electoral purposes,” he said.

Top Democrat on the panel, Senator Maria Cantwell, said the hearing would have been better if held in January after the Nov. 3 election.

Cantwell had initially rejected a request by Republicans to subpoena the three CEOs to appear at the hearing but later changed her mind and said she welcomed a “debate about 230.”

Twitter’s Dorsey warned the committee that eroding the foundation of Section 230 could significantly hurt how people communicate online. Pichai said Google operates without political bias and that doing otherwise would be against its business interests.

The committee was unable to establish contact with Facebook Inc’s Zuckerberg and declared a short recess. He appeared shortly after and said: “I was having a hard time connecting myself.”

Zuckerberg said he supports changing the law but also warned that tech platforms are likely to censor more to avoid legal risks if Section 230 is repealed.

All three CEOs agreed the companies should be held liable if the platforms act as a publisher.

Republican Senator Roger Wicker, who chairs the committee, said it was important to shield companies from liability without giving them the ability to censor content they dislike.

“The time has come for that free pass to end,” he said.

Wicker also criticized the companies’ decision to block stories from the New York Post that made claims about Democratic presidential candidate Joe Biden’s son. He and other senators such as Cory Gardner went after Twitter for not taking down tweets from world leaders that allegedly spread misinformation but going aggressively after Republican President Donald Trump’s tweets.

The hearing comes after Trump has repeatedly called for tech companies to be held accountable for allegedly stifling conservative voices.

The Justice Department urged congressional leaders in a letter Tuesday to move quickly to reform the law and cited the decision of Twitter to initially bar distribution of the New York Post story on Biden’s son.​ Biden has also expressed support for revoking the law.

U.S. lawmakers are not the only ones pushing for reform. The European Union’s executive Commission is drafting a new Digital Services Act that, in addition to tackling market abuses by dominant platforms, would also address liability for harmful or illegal content. Competition Commissioner Margrethe Vestager is due to unveil her proposals on Dec. 2.