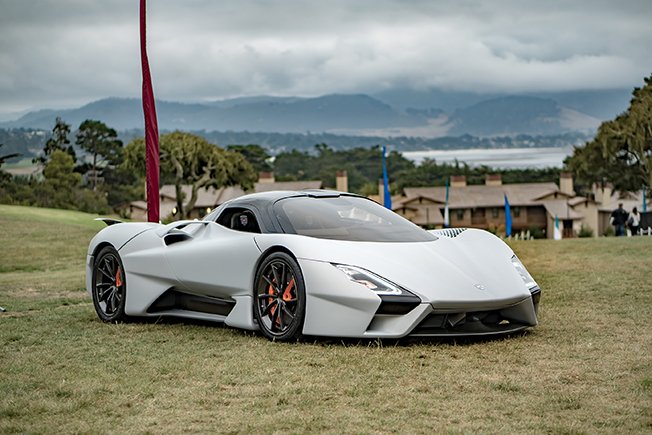 There is something undeniably cool about the fastest cars in the world. Cars that formally take the title, for however short, join an illustrious list of legends dating back to the very first cars.

The fastest car in the world stands as a present-day representative of our shot at automotive Everest. Think Lamborghini Miura, McLaren F1 and Bugatti Veyron.

In recent years, the often-contentious crown has been passed around like a hot potato, with companies from America, France and Sweden all revelling in the market boost that holding such a title can provide.

At that speed, it would take just seven seconds to cover the whole length of Molos in Limassol, and the 137km trip from Paphos to Larnaca would be over in 15 minutes. Insane.

Take nothing away from SSC – this is a hugely impressive engineering achievement that will be hard to trump. Still, for some strange reason the news of the record falling didn’t seem to make as much of a splash as might have been expected. Personally, I wasn’t so interested, and I’ll hedge a bet that unless you’re into cars, you didn’t even know. But why? Why has ‘Top Speed’, formerly the single most coveted statistic a car could boast become so meaningless?

Nowadays, however, this doesn’t seem so important. Today’s iPhone 12 camera has 12 megapixels – the same number as found the 2016 iPhone 7. It is not to say the camera has not improved in four years, but rather that engineers realised that improving other aspects of the camera would make for more of a tangible difference to the overall product.

Carrying this logic through to cars, we might consider any advancements in top speed capability since the 240km/h Mercedes 300SL of 1955 superfluous. ‘But, but… I live for speed’, cries a middle-aged Vin Diesel wannabe. Well, I would put it to him that a vehicle that can accelerate quickly off the line is much more fun, usable and safe than one that can do 500km/h+.

A little look into the method behind these record runs reveals top speed to be, for all practical intents and purposes, a hypothetical akin to that of a Formula 1 car producing enough downforce to drive upside down. Interesting to know, but irrelevant in the sense that it will never be tested.

Never again, at least. Not only is the location to pull something like this off almost impossible to come by, but the teams that set these records consist of large numbers of engineers who monitor the car as if it’s on life support.

The cars are driven by professional drivers and even minor fluctuations to something as seemingly innocuous as tyre pressure can cause a run to be aborted. Conditions are so unerringly specific that the prospect of anyone ever actually achieving these speeds is, unfortunately, relegated to the realm of hypothetical.

Also, while arguably subjective, I think part of the SSC Tuatara’s problem, in fact, part of any recent record car’s problem, is the Bugatti Veyron. You see, the Bugatti Veyron was not only the fastest car of its day, but also the most luxurious, most expensive, and most exquisitely built.

This overwhelming cocktail of superlatives rocketed the car to stardom – featuring in movies, songs and videos all over the globe. The shape became instantly recognisable and the Veyron morphed into what I can only describe as a sort of trophy for winning capitalism. In spite of its all-round supremacy, the Veyron was always known as ‘the fastest car in the world.’

Mistakenly, companies have sought to emulate the Veyron’s success by building their own ‘fastest car in the world’, not realising that there was so much more to the Veyron than just pace. Looking at the SSC Tuatara, you know it is going to be unbearably noisy, tricky to drive at low speeds and about as refined on the inside as a Viet Cong tunnel. Fast? Sure. Desirable? Not to me.

To add to this, the last few days have seen numerous videos emerge questioning the validity of the SSC Tuatara’s record. Experts have dissected the video footage and recorded the exact time taken between some easily noticeable milestones along the road (aided by Google Maps), then applied the simple ‘average speed = distance/time’ equation only to find that the claimed speed of 533km/h is mathematically impossible.

These allegations are fuelled further by the suspicious margin by which SSC took this record, with the last record holder managing just 491km/h (increments are usually single figure).

Despite my assertions that top speed is increasingly irrelevant, uncovering the truth of this record is very important. Nobody will be more concerned than Bugatti, who recently sold 30 of the new ‘Chiron SuperSport’, a top speed focused edition of their already ballistic Chiron that comes in at over €1m more than the standard car.

What does your extra million euros get you? Well, it used to buy you the title of the fastest car in the world. Apparently, that hefty marketing clout now belongs to the Tuatara.

Cyprus must upgrade grid for wind and solar