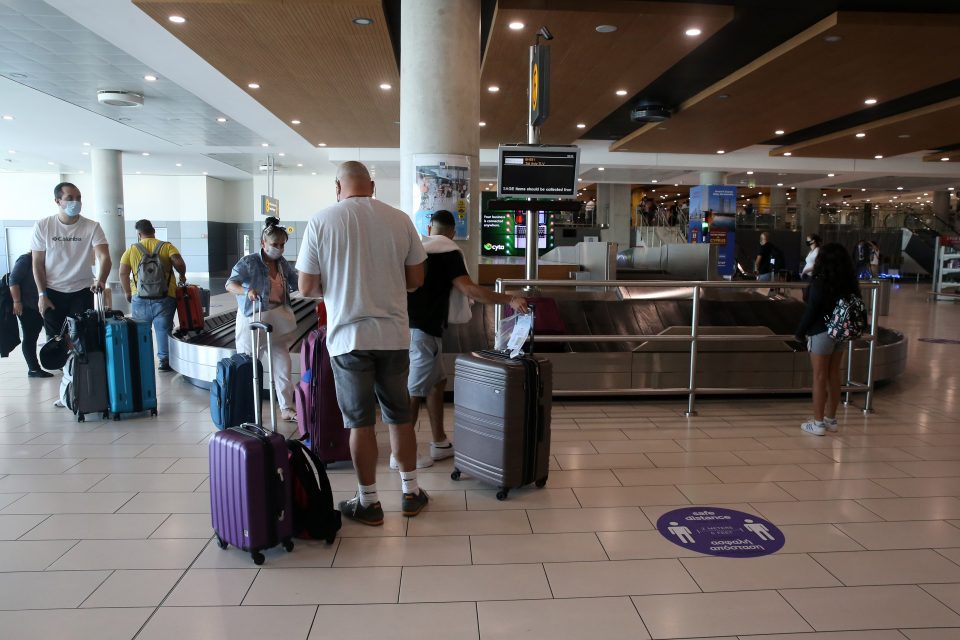 British tourists who are currently holidaying in Cyprus, many because it is school half term, are rushing to board flights before Sunday when a 14-day self-isolation for travellers returning to the UK will be introduced.

“Most of them are trying to make arrangements on their own to leave earlier,” head of the hotels’ association Pasyxe Haris Loizides told the Cyprus Mail on Friday.

“I am pretty pissed off, I had to pay an additional £250 to British Airways to move my flight 24-hours earlier. That’s for an economy ticket without luggage,” Deborah Lewis, due to have flown home on Sunday, said.

In addition to the 200-pound test she had to present to fly to Cyprus and the cost of her initial ticket, the one-week visit has now cost her almost £1,000.

“I think it’s ridiculous, if I fly tomorrow I am free, but if I fly back on Sunday I am not. They could have imposed quarantine on Monday morning”.

A higher number of tourists visited the island this week as many UK schools were closed for half-term holidays. But many had return flights booked for Sunday, the day before schools reopen.

“Thousands of brits in Cyprus right now for half term, lots not flying back till Sunday evening,” a twitter user wrote explaining that their children will need to miss two weeks of school if that happens.

Another user asked, “can’t you just wait another 24 hours so we can get back on the flights we have already booked”.

Many pointed out the irony of the situation as Cyprus has fewer coronavirus cases than England.

“How are you not deeply ashamed to blacklist a tiny country like Cyprus with some 100 daily cases when you have 23,000!” a female user said. “This is a circus act,” she added.

“I am in Cyprus also and there is no risk,” a British traveller said on their social media, highlighting the strict measures to prevent the spread of Covid-19 on the island. “You are tested on arrival, mask wearing in hotels is compulsory and even outside.”

Face masks became mandatory in all public places across the island, including outdoors, on October 23.

“Sadly, we’ve had to remove Cyprus holidays from our site,” Thomas Cook tour operator announced to people on holiday there at the moment or due to go in the next few weeks. The company urged people to contact its staff for any questions about their booking.

The Cyprus government has kept the UK in category B since August despite increased cases there in an attempt to bring in more tourists from what is traditionally the island’s largest market.

Loizides however said many are now cancelling their holidays.

“The most significant impact of the decision is that we are already experiencing many cancellations form people in the UK,” he said.

This will be the “final blow” for the tourist industry, after a slow summer due to the pandemic.

“If this restriction continues, we are going to lose all our Christmas and spring business” Mary Manoli the owner of Chronos Travel tour operators in Nicosia said.

Chronos Travel experienced a number of cancellations in bookings for the upcoming months.

“Most of us are probably going to go for closure” she said, adding she fears that possibility for her own office.

The president of the Association of Independent Tour Operators (AITO) in the UK Noel Josephides, owner of Sunvil Travel, which specialises in offering packages to Cyprus, said they also had many cancellations.

“People are nervous to book” he said. “This has damaged any future bookings.”

Josephides is positive that Cyprus will be put back on the ‘green’ travel list for the UK, as other countries were also moved multiple times the last few months.

“None of us can really understand why Cyprus, which has a lower infection rate, has been removed because you are actually safer in Cyprus than you are in the UK,” Josephides added.

According to the UK government’s website, anyone who visited Cyprus including transit stops will have to self-isolate.

Military flights from Akrotiri and Dhekelia to the UK are excluded from the restriction.

A British Bases spokesman said: “At present, flights out of RAF Akrotiri remain on the UK Government’s travel corridor list. Currently, personnel travelling on essential military flights within the SBAs will not automatically be required to isolate in the UK on arrival.”

He added: “British Forces Cyprus remains in-step with the Republic of Cyprus measures as we continue to respond to this illness together.”