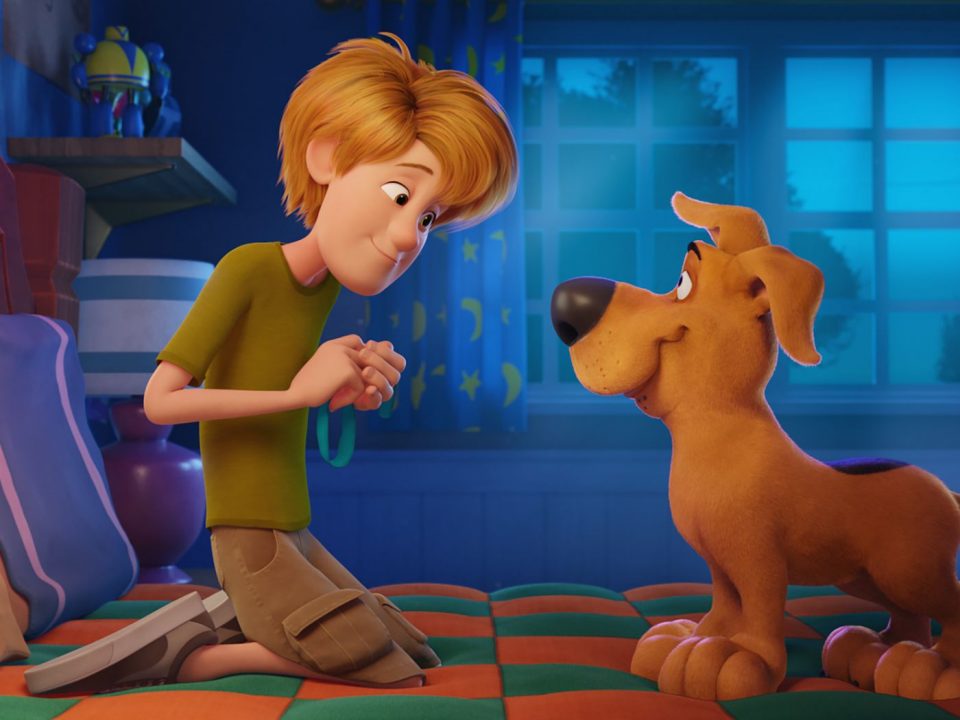 Disclaimer: Scooby-Doo is one of those massively popular cartoons that mostly passed me by as a child. Vague recollections of the mystery gang solving ghost crimes with the titular ‘scaredy-cat’ hound sort of float about somewhere in the furthest regions of my mind, but I’m not familiar with the characters or stories. When it comes to animated studio productions, I was more of a Tom & Jerry or Smurfs kind of kid. And boy are those characters missed in Tony Cervone’s dastardly version of the Scooby-Doo origin story, Scoob!

The one thing I can recollect from those misty childhood memories about the old Scooby-Doo animated show is a certain homely and spooky atmosphere. Parents who are either stuck at home or venturing out to cinemas to catch this latest, modern (post-modern?) Scooby-Doo adventure with their kids will find none of that atmosphere here. No, the cozy sense of nostalgia one might expect to get from the gang searching for clues in haunted houses full of cobwebs, battling ghosts, and tripping over ingenious booby traps, has been replaced by a Liam-Neeson-action-movie editing style, vibrant and colourful (albeit pretty) animation, references to “toxic masculinity” and “imposter syndrome”, and one seriously convoluted plot that centres around an old Alexander the Great legend and the most oversaturated concept of modern Hollywood mainstream cinema: superheroes. Because we don’t have enough of those, obviously.

To its credit, the movie kicks off in a pretty engaging way. We meet a young, lonely Shaggy who shuffles through his playlist only to end on some kind of song (or podcast) about loneliness (which ends up being the funniest moment in the entire movie, not even a minute in). We see how he and Scooby find each other, develop their friendship and meet the rest of the gang – Velma (dressed as Ruth Bader Ginsberg!), Fred and Daphne – on a prodigious Halloween night. They stumble onto a house that’s reportedly haunted, and unwittingly have their first adventure by capturing a ghost (who turns out to be a thief). At this early stage, the adult watching might actually make the mistake of thinking that Cervone’s version of Scooby-Doo will be a delightful homage to the old school animated show, and how we’d get to see a coming-of-age origin Scooby Halloween story with a modern twist that still manages to stay true to the original’s charm.

This illusion is broken quite quickly by a forgettable musical montage as we flash forward by 10 years to the present and an already-grown up gang. Shaggy (Will Forte), Fred (Zac Efron), Daphne (Amanda Seyfriend) and Velma (Gina Rodriguez) sit around a table, trying to figure out how to get their mystery hunting company – Mystery Inc. – to the next level, seeking investment from Britain’s Got Talent’s Simon Cowell (because… why not?). Shaggy and Scooby are deemed the weakest link in the gang thanks in large part to their laziness and are booted out by Cowell. Looking for solace, with only their friendship to console them, they find themselves in a bowling alley battling evil robotic bowling pins who are under the control of supervillain Dick Dastardly (Jason Isaacs). On the brink of defeat, Shaggy and Scooby are beamed up to space and rescued by superhero Blue Falcon (Mark Whalberg) and his crew, Dynomutt (Ken Jeong) and Dee Dee Sykes (Kiersey Clemons). Turns out Dastardly’s maniacal plan involves dognapping Scooby in an attempt to solve a mystery involving the mythical Cerberus, the three-headed dog that guards the gates of hell.

If you feel a little dizzy after reading that synopsis, no one would blame you. Cervone’s attempt at blending in a number of obscure Hanna-Barbera characters with Scooby-Doo reeks of as much desperation as the not-so-subtle references to political correctness. The film ends up being a tonal mess from the moment the Scooby-Do gang grows up, with ludicrous scenarios, painfully unfunny jokes, and legitimately scary moments that put to question the film’s PG rating (you may want to cover your child’s eyes when Cerberus finally appears). Watch Scoob! if you absolutely have nothing better to do and you’re in a Halloween-y mood, though your time would most likely be spent better by trying to dig up the old Scooby-Doo show, or pretty much any other spooky-themed cartoon for that matter.

But don’t take it just from me, an adult who didn’t grow up on Scooby-Doo. I watched the movie with a friend and her seven-year-old daughter. When it ended, I turned to my friend’s kid and asked her for her honest opinion. “It was okay,” she said, “but I’ve seen better.”