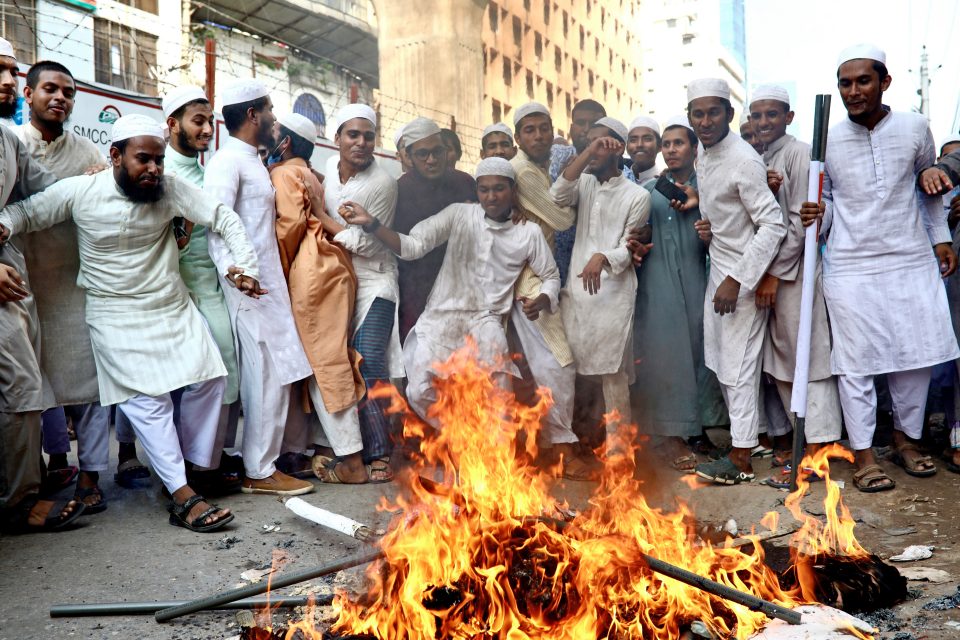 Islamists burn an effigy of French president Emmanuel Macron as they take part in a protest calling for the boycott of French products and denouncing Macron for his comments over Prophet Mohammed's caricatures, in Dhaka, Bangladesh, October 28, 2020. REUTERS/Mohammad Ponir Hossain

Tens of thousands of Muslims protested in Bangladesh on Friday after killings by a Tunisian migrant in a French church prompted a vow by President Emmanuel Macron to hold his ground against attacks on his country’s values and freedom of belief.

“Macron is leading Islamophobia,” said demonstrator Akramul Haq. “He doesn’t know the power of Islam. The Muslim world will not let this go in vain. We’ll rise and stand in solidarity against him.”

France raised its security alert to the highest level on Thursday after a knife-wielding man shouting “Allahu akbar” (God is Greatest) beheaded a woman in a church and killed two more people before being shot and taken away by police.

“We will not give any ground,” Macron said outside the church in the city of Nice, vowing to deploy thousands more soldiers to guard sites such as places of worship and schools.

France had been attacked “over our values, for our taste for freedom, for the ability on our soil to have freedom of belief”, he added.

A judicial source in France said a 47-year-old man had been taken into custody on Thursday evening on suspicion of having been in contact with the perpetrator of the attack.

The violence has come at a time of growing Muslim anger over France‘s defence of the right to publish cartoons depicting the Prophet Mohammad, and protesters have denounced France in street rallies in several Muslim-majority countries.

Several leaders in Asia expressed support for France after the attacks on Thursday, the birthday of the prophet.

“It is just the most callous and cowardly and vicious act of barbarism by terrorists and should be condemned in the strongest possible way,” said Australian Prime Minister Scott Morrison.

Morrison had expressed his support to Macron, he told media on Friday.

“We share values. We stand for the same things,” he said.

Morrison also condemned as absurd comments by former Malaysian prime minister Mahathir Mohamad that Muslims had a right to be angry and kill “millions of French people for the massacres of the past”.

“Freedom of expression is a right, calling for violence is not,” the U.S. ambassador to Malaysia, Kamala Shirin Lakhdhir, said on Twitter in response to Mahathir’s comments.

Mahathir said his comments were taken out of context, while a senior Malaysian government figure, Abdul Hadi Awang, said Macron’s comments could not be justified.

“The French president’s statement exposes his hostility against Islam and its followers,” said Abdul Hadi, a leader of the Malaysian Islamist party PAS.

“I strongly condemn the recent terrorist attacks in France,” Modi said on Twitter on Thursday. “India stands with France in the fight against terrorism.”

Thursday’s attack came less than two weeks after a middle-school teacher in a Paris suburb was beheaded by an 18-year-old assailant who was apparently incensed that the teacher had shown a cartoon of the Prophet Mohammad in class.

France has suffered a string of Islamist militant attacks, from bombings and shootings in 2015 in Paris that killed 130 people to a 2016 attack in Nice that killed 86 when a militant drove a truck through a seafront crowd celebrating Bastille Day.