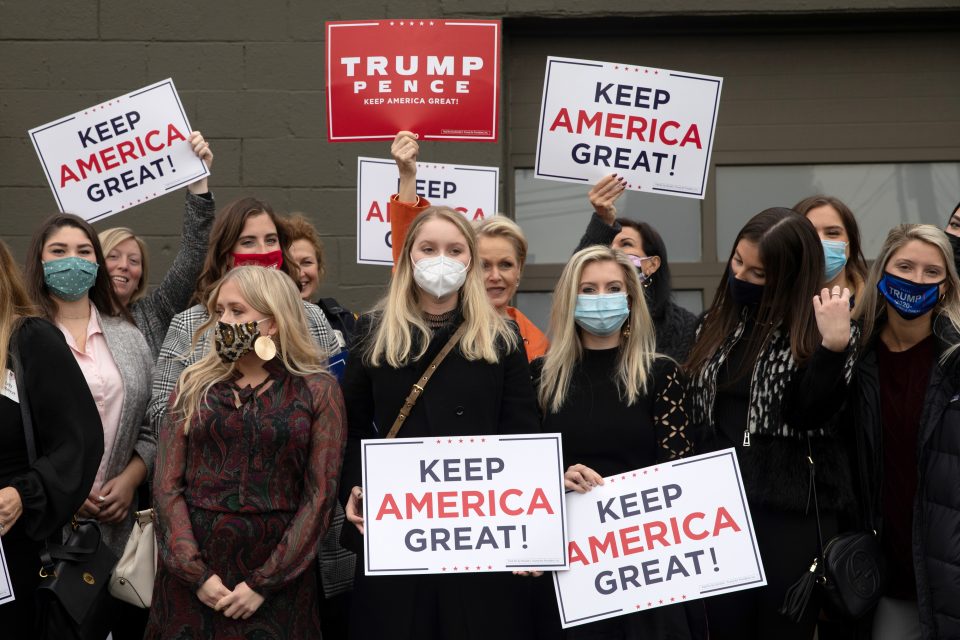 Women voters gather outside with signs for a group photo with Tiffany Trump in Birmingham, Michigan, U.S., October 29, 2020. REUTERS/Emily Elconin

Man goes into a pub. No, wait, I’m not stupid. You don’t get mangoes in a pub, maybe some sliced carrots and nuts, but not mangoes. They don’t belong in pubs, they belong on trees and incredibly after two decades here I only recently discovered that they grow on trees in Cyprus, and they are fantastic.

I’ve eaten mangoes many times around the world. I’d rank my first mango with sticky rice experience as up there with first exposure to Chinese crispy duck, or a baby’s first taste of chocolate. On this occasion the green mangoes I enjoyed from a friend’s garden in Paphos opened to a deep vibrant orange with a powerful intensity, sweeter and more delicious than their Asian cousins.

I’m hooked, but why isn’t this local fruit more readily available in Nicosia? I want it showcased prominently and I am sure this would be popular with Nicosia shoppers. They’ll all want Paphos mangoes! Listen to the people.

What else do the people want that is intensely orange? Donald Trump of course! See what I did there? Populism, unfairly now a term of derision, earned the incumbent POTUS the backing of the people. It is, in its true sense, a political ethos addressing concerns of ordinary people who have been disregarded by the establishment elite. Recently the meaning has been hijacked to describe a mob of ill-educated, unintelligent, fascist, racist, sexist and ill-informed morons. They used to be called the working class and backbone of a country.

Populism manifesting with the election of Trump was a loud and unequivocal statement aimed at the political status quo. It rejects the swamp of career politicians striving to be in “power” rather than “in service.” A heartfelt sentiment from an electorate who generally aren’t stupid or ill-informed at all, quite the opposite. The people clearly have had enough.

And now the ordinary man has fallen quiet, weary of being lambasted as a fascist on any attempt to express this alternative feeling in healthy debate, in contrast to the incessant social media anti-Trump vitriol from the urban liberal middle classes in collusion with mainstream media and celebrities. It is not that their criticism isn’t valid, it just lacks any balance. That is why I think there could be a surprise on November 3 as there was in 2016 with Trump’s election and Brexit.

Hand in hand with the tirade of venomous criticism of all things populist comes an unmerited glorification of the other side. Anything other than Trump will do, even if it’s just as unpleasant. Hillary Clinton was not a credible opponent. Obama is not the saint he’s now held up to be. He bleated about child gun deaths in the US while funding arms sales causing child deaths in Yemen and Palestine. An enthusiastic exponent of drone strikes he also embraced diversity and inclusion so warmly as to earn the nickname ‘deporter in chief.’

And Biden? If ever there was the personification of career politician feeding on power, this is it. The youngest ever senator now poised to become America’s oldest president. A man whose vintage prevents him from communicating a clear train of thought, and who last week referred to the current president as George. A man whose career is as peppered with racism and misogyny as anything emanating from The Donald. A man who actually labelled himself a ‘Zionist’ and enthusiastically championed the Iraq war. And his recent Ukraine link involving the FBI being overshadowed in the news by Borat exposing Guiliani ‘adjusting himself’ in a hotel room. C’mon man, the people are not buying it.

Give the ordinary people what they want. Give them an alternative to self-serving, corrupt and power-mad establishment politicians. The US almost had it with Bernie Sanders but have since blown it with Biden. Until then comical extremes will emerge as figureheads as they have done in the UK too. Populism in its real sense will grow and eventually be fronted by competent and plausible leaders – then it’s here to stay. Until then don’t be surprised to see President Kanye West or Kim Kardashian next.

Meanwhile back in Nicosia the people have many viable alternatives to Paphos mangoes in the local fruit market. None quite as exquisite though as my newfound Cyprus favourite. Somebody please champion mangoes to Nicosia. Give the people what they want or they’ll end up choosing their own orange coloured fruit (cake). I’ll get my coat.

Cyprus Mail 75 years: the torture of standing by and watching, and taking photos

Body of a man found by hunters in Limassol district