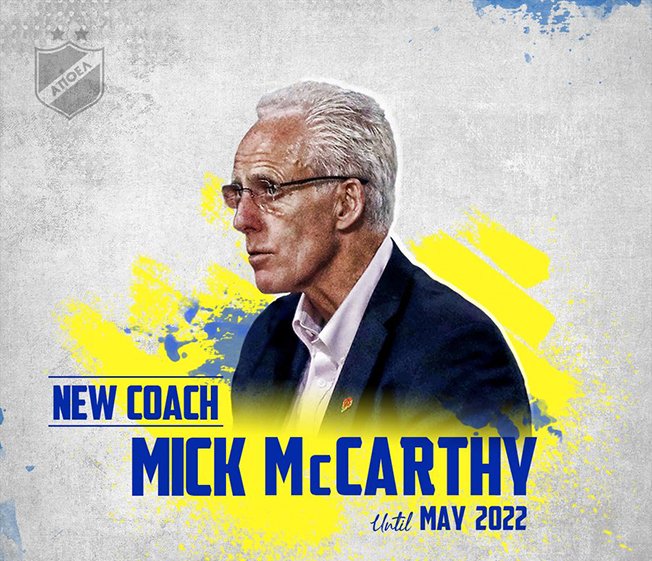 McCarthy has signed a contract until 2022, a significant commitment from both parties all things considered.

McCarthy brings with him assistant manager Terry Connor. Connor is a former player himself, having played for Leeds, Swansea and Portsmouth throughout the 1980s.

A statement on apoelfc.com.cy said of McCarthy and Connor: “We welcome both of them to Apoel and we wish them to immediately help the team return to good and substantial performances so that it can meet its goals, which are to win titles.”

McCarthy’s first match in charge will be against second-bottom Ethnikos Achnas on Saturday.

The new appointment follows Apoel’s 1-1 home draw with Apollon Limassol over the weekend, with the struggling Nicosia side 11 points off the top of the table.

While Apollon will feel like the game was there for the taking, dropping points will appear less of an issue with Omonia and Anorthosis also faltering over the weekend.

Though the visitors dominated possession they left most of their cutting edge for the final 30 minutes of the game, opening the score in the 60th minute and creating a handful of promising opportunities after having conceded.

Ndongala was one of the bright spots for the Nicosia club, with the winger pressing eagerly and ably when called upon to do so and progressing the ball well, either by forward passes or by carrying the ball forward himself. Though the Congolese winger alternated between both flanks he found more joy going down the right, from which he scored his side’s equaliser in the 74th minute.

McCarthy was in attendance at the GSP Stadium, observing the game after having been approached by Apoel with an offer to take over after previous manager Marinos Ouzounidis was fired last Monday. Presumably, McCarthy was close to signing for Apoel at the time but had asked to watch the game from the stands to have a more complete view of the squad.

Elsewhere in an upset-filled round of the first division, AEL Limassol emerged the winners of the weekend after having beaten Ermis Aradippou at home while three of the teams closest to them all dropped points.

In addition, with AEK having had their game postponed due to Pafos’ Covid troubles, this means that AEL have leapfrogged the Larnaca club and find themselves in third place.

AEL are now just two points off second-placed Anorthosis and first-placed Apollon, although the latter, just like AEK, have a game in hand.

Despite the score and AEL’s generally positive display for most of the game and Ermis’ last ditch effort to salvage a draw, the game was dominated by what happened after it had finished when Ermis manager Nikos Andronikou used his post-match press conference to announce that this had been his final game in charge of the club.

AEL manager Kerkez expressed his surprise at this predicament, noting that Andronikou had done well as Ermis manager up to this point.

“I don’t feel good about what I heard about Nikos Andronikou. This team has taken a lot of points. I congratulate him and wish him the best”, Kerkez said.

Adding to the intrigue around Andronikou’s dismissal, Ermis chairman Loukas Fanieros said that sacking Andronikou was his decision, explaining that the two had a clash in philosophies.

“We at the club have a different philosophy to Nikos Andronikou, that’s why we couldn’t work together”, Fanieros said, referring to both himself as well as other members of the board and backroom staff.

“We want most of our players to be active. Mr. Andronikou only wants to rely on 14 players”, Fanieros added.

In the biggest upset of the round, Omonia lost 1-0 away to Olympiakos Nicosia. This is the second week in a row where Omonia dropped points following their midweek Europa League game.

Omonia manager Henning Berg has come under fire for the extensive rotation policy he has implemented in response to the increased physical demands of competing in both domestic competitions and the Europa League.

Just like in the game against Enosis in the previous round, Omonia’s display saw a notable improvement in the second half without the Nicosia club being able to convert that into a win.

Berg may point out that his critics have a short-term outlook on the team’s performance, seeing as Omonia may have done enough to have gotten more points in the past two games and that any weakness in the performances of some of the younger players may be worth it as this will aid their development.

For the time being, however, Omonia have dropped three valuable points.

On the subject of Anorthosis, though the Famagusta side will be bitterly disappointed to have not overtaken Apollon this weekend after their 1-1 draw with Karmiotissa, they have bigger things to deal with at the moment as a positive Covid-19 case has been discovered among its players.

Early reports suggest that the player in question was out of the squad for the game against Karmiotissa.

In regards to that game, Anorthosis manager Temur Ketsbaia said that his team did enough to have won the game.

“I wouldn’t say that we didn’t do well. Our performance merited a win, we created enough chances”, Ketsbaia said.

“We are now focused on the cup. The rest of the campaign will be difficult and we will have to prepare for the next game”, the Anorthosis manager added.

The final game of the round takes place on Monday, with Nea Salamina hosting Ethnikos Achnas (6pm).