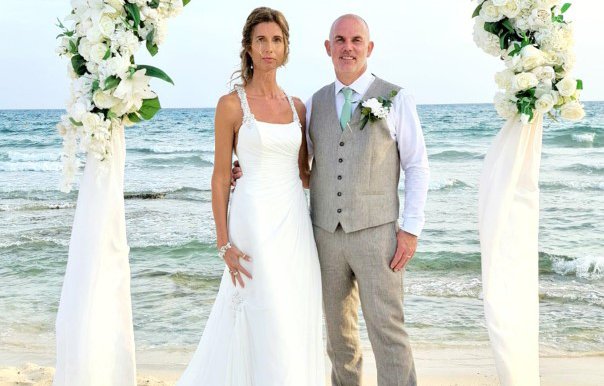 A couple from the UK, Alan and Jaqs, were finally able to get married in Protaras last week, three months late after they had to cancel their plans earlier this summer due to the coronavirus restrictions.

Alan Hall from Newcastle told the Cyprus Mail, he and his partner “finally made it just in time” and got married last Tuesday in Protaras, just days before tough new measures were introduced by the British government which from Thursday will restrict travel abroad.

The couple had been forced to cancel their August wedding following difficulties in securing coronavirus tests for themselves and their two children.

“This year has been an emotional roller coaster with plans being made and smashed but it has all been worth it,” Hall told the Cyprus Mail.

Their wedding had been due to take place on August 4, but they had to cancel after being unable to obtain negative coronavirus test certificates in the UK but also conflicting information on whether the British NHS test certificate was accepted by Cypriot authorities.

The Cypriot government had moved the UK to category B on August 1 requiring British tourists wishing to visit the island a negative coronavirus test certificate not older than 72 hours.

That move prompted numerous questions including whether the NHS certificate would be accepted.

By the time the confusion was clarified it was July 31 and the couple felt that had no choice but postpone their big day and reschedule for October.

It later proved to be a blessing in disguise after Jet2 announced it was cancelling the flight the family would have been on, along with all its flights to Cyprus up to mid-August citing prohibitive entry restrictions.

“Back in July we had no option of getting PCR Covid tests from anywhere in the UK so had to cancel our wedding, two days later Jet2 cancelled anyway,” he said.

Hall, who had his heart set on getting married in Cyprus since he has been visiting the island for many years, said they were finally able to find a facility for Covid tests in the UK for €500 for the four of them.

“Well, we finally made it just in time and got married on Tuesday, October 27,” he said. They arrived at Golden Star Hotel in Protaras last Sunday.

“The hotel gave us the best room as they knew the trouble we had had getting here. And finally, I met my bride on Sirens beach on the 27th.”

And did they manage to get home before the British government announced last week that all travellers from Cyprus to Britain had to quarantine for two weeks if they did not get home before last Sunday?

“We looked for flights but could not get any,” Hall said.

“We will both miss work for two weeks and our two girls will miss school.”

But the couple have no regrets and the family are determined to return.

“Our stay has been worth the quarantine for our wedding and honeymoon. Thank you Cyprus and hope to see you next year.”

MPs say no expenses for oversight board until sewerage scandal sorted

Leicester up to second, Fulham out of relegation zone

Undersecretary to president rushed to hospital for surgery