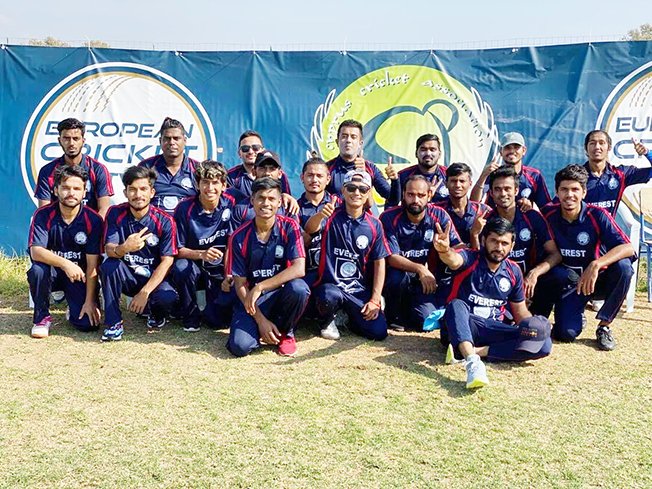 Everest Cricket Club played a double-header in the second division of the CCA #BAOFinancial Autumn T20 League at Ypsonas cricket ground on Sunday, and by winning both matches assured themselves of top spot in Group B and a place in the semi-finals.

The results also mean that Fellows are confirmed in second place in the group, and will advance to play against Black Caps in the semi-final stage. Everest’s next opponents will be the team that finishes second in Group A, which could still be any one of Amdocs, Limassol Thunder or Eastern Cyprus.

In the morning game Ajit top-scored with 65 not out and was supported by Ashish (32) and Madhukar (28) as Everest reached 170 for 4 in their 20 overs. Limassol Moufflons in reply had a good opening stand between Asad and Ravi, who both made 31, but only Sufiyan with 28 was able to add substantial runs and the innings fell 21 runs short at 149 all out.

The Everest bowlers shared the wickets – 3 each for Arjun and Sahil, and two apiece for Bhimsen and Ram.

The afternoon game was dominated by the Everest opening batsmen. Madhukar hit a century while Jeewan added 84. Despite a late clatter of wickets, with 3 falling to Haider, the total of 204 for 9 looked a stiff target for opponents Limassol Bangladeshis.

And so it proved. Opener Rajib made a good effort with 45, but received little support as the Bangladeshis were bowled out for 101, losing by 103 runs. Everest bowlers Bhuwan and Bikash both had identical figures of 3 wickets for 7 runs.

Tourist in hospital after injured by wife