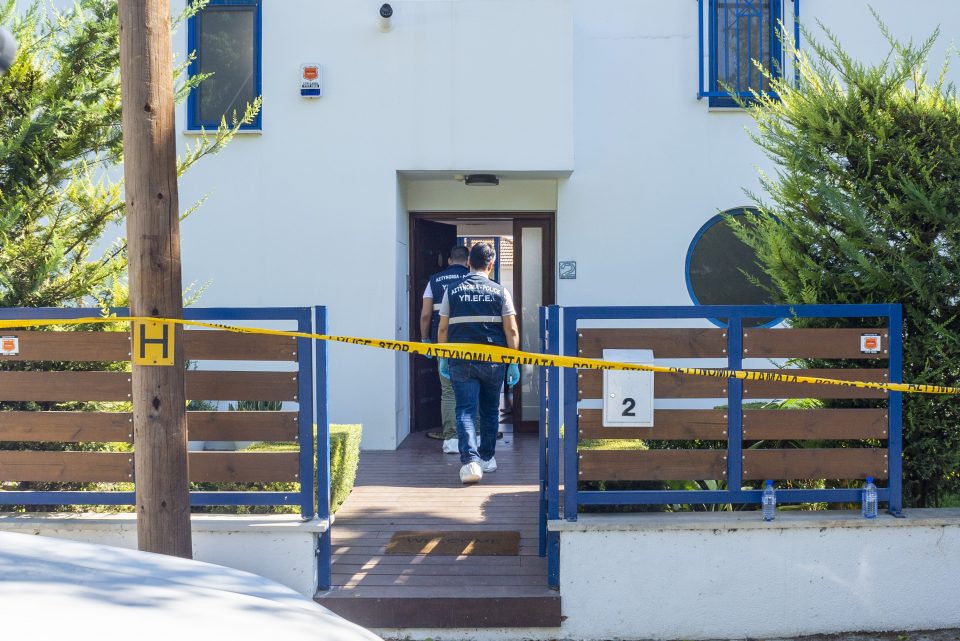 Police at the murder scene

Two Lithuanian men were referred to the criminal court on Monday to face trial for the murder of a 36-year-old woman in Limassol in October.

The two men, 29 and 24, face a premeditated murder charge, which carries automatic life imprisonment, as well as counts relating to conspiracy to commit felony, robbery and drug possession.

Their trial is scheduled to start on December 1.

The pair are suspected of killing Iryna Hurskaya from Belarus, a divorced mother of three.

Hurskaya’s body was found on October 11 in her house in Ayios Tychonas.

The two suspects will remain in custody until the start of their trial.

The 29-year-old had been sought by police from the first moment after it emerged that he had been seeing the woman.

Police told the court previously that he was addicted to gambling and began a relationship with Hurskaya in March this year.

Once she realised he was addicted to gambling, the court heard she gave him one month to get over it.

Although he attended a support group, he continued betting and once Hurskaya realised this she cut off all contact with him. But he admitted he continued to try and contact her but she did not respond and blocked him on social media.

Having lost all his money, the 29-year-old said he met the 24-year-old, whom he already knew, in a bar and suggested the two of them rob the victim’s home, to beat her up and use her fingerprint to open her mobile phone and make a bank transfer from her account to his.

On the day of the murder, the 29-year-old broke into the victim’s home through a window in the basement and after letting the 24-year-old in, found Hurskaya in her bedroom and started beating her and when she resisted, strangled her.

Having taken valuables from her room, the 29-year-old left without seeing the 24-year-old who said he had already left the house after seeing the victim’s 15-year-old son coming out of his room.

The teenager has told police that he heard a noise but thought it had come from outside.

Some of the valuables were tracked down by police after they were sold cheaply in Nicosia where the 29-year-old had sold a Rolex watch worth €11,000 to a jeweller for €750.

He said he had sold it to another person for €3,700, who in turn had sold it for a higher price to someone in Germany, while efforts are being made to return it to Cyprus.

The 29-year-old was arrested four days after the crime.

During the search for the main suspect, the 24-year-old had gone to the police and told them about the meeting in the bar but did not mention anything about going to the victim’s house. When he was later arrested he admitted his part in robbing the house.

Tourist in hospital after injured by wife