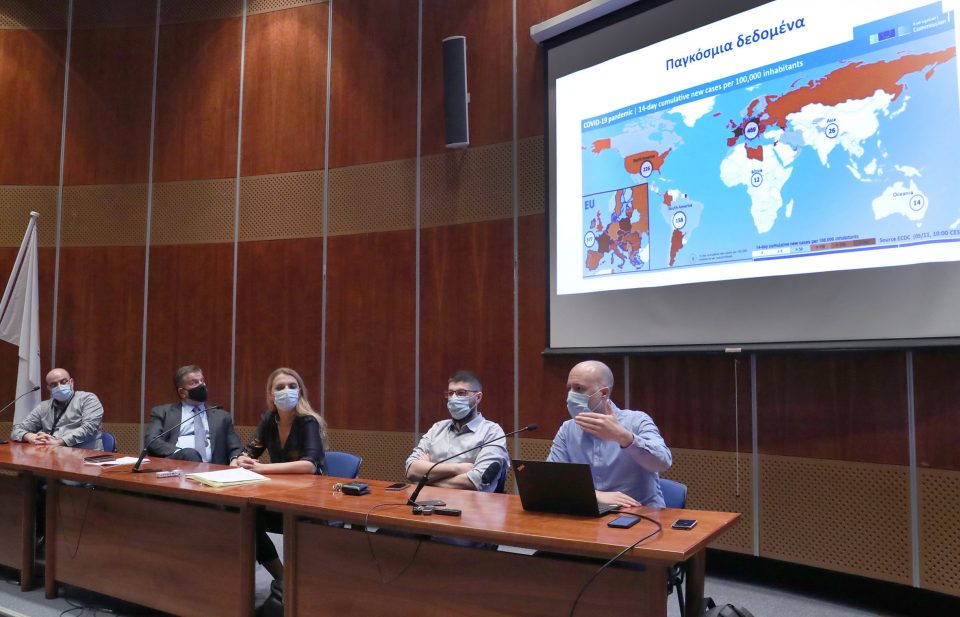 Members of the scientific team at a news conference on Friday

The latest coronavirus measures are aimed at restricting contacts and cross contamination, experts said on Friday warning that Cyprus now meets the criteria to be classed as a high epidemiological risk country.

Experts also said that the mortality rate of the novel coronavirus is much higher than that of flu, arguing that Covid-19 is not a type of flu, as some say.

During a press conference, members of the advisory committee on coronavirus presented the latest situation as regards Cyprus and explained the reasons why the restrictive measures in place since Thursday were decided.

According to committee member Giorgos Nikolopoulos, who cited indicators also proposed by the ECDC, the cumulative incidence rate per 100,000 population is slightly over 210, while the limit is 60.

The positive rate two weeks ago was at 3.6 per cent, he said, while there is indication of an increase. The limit for the weekly positivity rate is at 3 per cent. The spread rate among the elderly is another variable that needs to be taken into consideration if it exceeds 58, he said. In Cyprus it is over 60.

“Therefore, Cyprus meets the criteria, and we must see it as a country of high epidemiological risk,” Nikolopoulos said.

In Limassol, the incidence rate is over 420 per 100,000 population, in Paphos it is over 300, while in other districts the limit of 60 has been exceeded. He said that a further increase is seen in Famagusta.

Now 90 per cent of people in Cyprus can contract the virus but there is nothing to reduce the reproduction rate, since there is still no vaccine available, he said.

He also pointed out that the novel coronavirus is not flu, a position backed by most scientists. The coronavirus’ mortality rate is between 3 per cent and 4 per cent whereas that of flu is at 0.1 per cent.

“Whoever does not believe what we say, can look at deaths worldwide. Influenza is at 650,000 a year, we have reached 1.2 million deaths from the coronavirus,” he said.

In Cyprus, he said, the biggest number of flu deaths was 18, two years ago, while there have been more than 30 deaths of people with coronavirus so far.

Nikolopoulos also dismissed as “a big mistake” the notion of herd immunity.

“Mankind has never attempted such a thing, the only way it has worked is through vaccination,” he said. He pointed out that one third of the population were vulnerable groups and asked how heart or cancer patients would be protected that way.

Responding to a question, Leondios Kostrikis,  Professor of Biological Sciences at the University of Cyprus and Head of the Laboratory of Biotechnology and Molecular Virology, expressed concern over the numbers of people who believe there is no such virus and could refuse to be vaccinated.

He referred to the role of social media and the need to educate people on how to use these platforms “because in many phases of our lives they can end up very dangerous.”

As regards the vaccine, he said, that when it is finally ready, around 60 per cent of the population will need to be vaccinated. He said, however, he did not believe that would be a problem.

Experts also referred to the spread of the virus within the community and how the measures in place were decided.

Constantinos Tsioutis, Assistant Professor of Internal Medicine at the School of Medicine, European University Cyprus, said that lately, there was increased transmission of the virus in workplaces, stressing the importance of better organisation, more remote working and grouping of staff if possible.

Tsioutis also explained that the decision for all food and beverage places to close by 10.30pm in all districts was meant to curb the spread of the virus.

The measure was initially introduced in Limassol and Paphos but, according to Tsioutis, many people from these areas would go to other districts where such places were open until late night and spend many hours there, leading to the spread of the virus that way.

He also said that it has been observed in many countries that people who are out during late hours are more relaxed and do not follow the necessary measures, leading to high transmission of the virus.

As regards the ban on sports and social activities for minors, Zoi Dorotha Pana explained that the reason this was decided despite that schools remain open, was to avoid cross contamination and restrict the spread of the virus by keeping stable groups. She said children meeting in the afternoon for sports or other activities, would create other groups and potential spread of the virus between them.

“We try as much as possible to have stable groups,” Pana said.

Citing the latest publications, Pana said children under the age of 11 may transmit the virus a little less than older children who show the same pattern as adults.

Weekend mainly fine with some showers and dust

Kadis unveils extra grants worth €4m to shore up producers