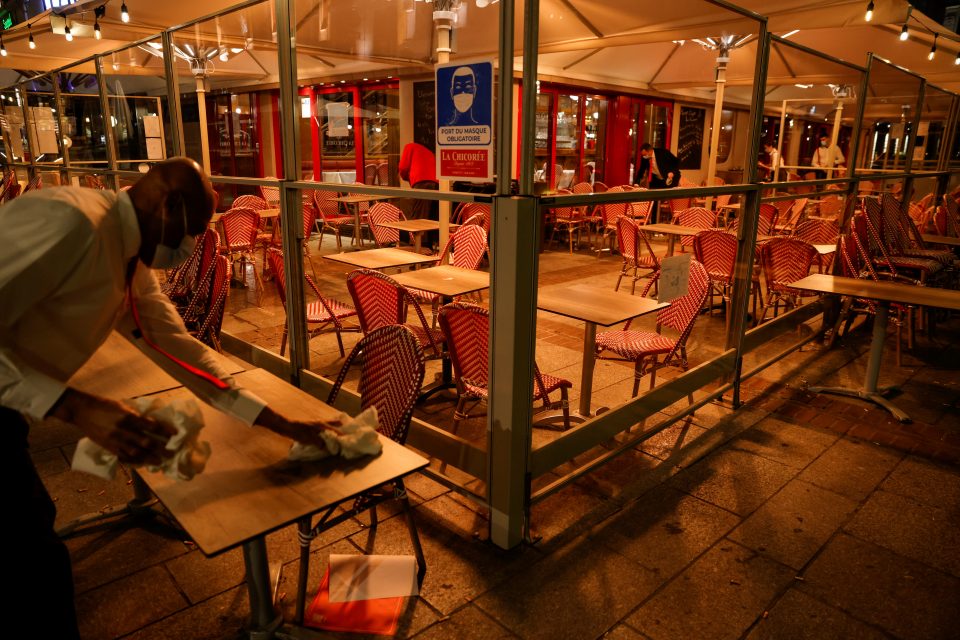 All restaurants have to be closed by 10.30pm

The latest Covid measures including a temporary islandwide curfew and the closure of venues at 10.30pm could sound the final death knell for many businesses which had not yet recovered from the lockdown earlier in the year, they said on Thursday.

The government imposed the stricter measures, which became effective as of Thursday night, in an attempt to curb the spike in Covid-19 cases that has remained in triple digits for weeks. Thursday’s tally was a record 233 people testing positive for the virus.

But restaurant and bar owners, wedding venues, sports and dance professionals and gyms among others say this could see some of the them shut down for good.

They say they are more than willing to observe all other the measures against the spread of coronavirus but need to stay open to do so, a representative said on Thursday.

The fact that food and beverage places will be forced to close by 10.30pm in all districts until the end of the month, and the extension of the ban on sports for minors in the Paphos and Limassol distrcits until November 16 were the main issues of concern.

Professionals in the sports and wedding and events industries, but also owners of pubs and restaurants, expressed serious concern for their survival.

“Unfortunately, with the new measures, we lost the Christmas season,” Yiota Kapari, spokesperson of the association of events professionals (Pasyepek), told the Cyprus Mail.

The industry would not even be able to recover until next May, she said, when weddings are expected to resume after the Easter fasting since the Church does not allow these ceremonies during fasting periods. Orthodox Easter falls on May 2 next year.

“Many businesses have not worked since October 2019, and are not expected to until May 2021,” she said.

“No matter how economically robust they may be, they will not be able to withstand this.”

“This year weddings are being postponed due to the measures,” she said, adding many couples had to cancel after already postponing it. This was very stressful for couples, and the businesses involved, she said.

For Kapari, the biggest problem was not so much the reduction in the number of people that can attend weddings from 350 to 150, but the obligation of events venues to close by 10.30pm.

“There is not enough time even for dinner to be completed,” she said. “Who would get married knowing they would have to stop at 10.30pm?” she asked.

“Without businesses there is no economy,” said Fanos Leventis, head of the association of owners of recreation centres (Pasika).

Leventis said the food and beverage businesses would follow the government measures but in order to do so, “we must remain open.”

According to Leventis, the obligation to close shop by 10.30pm would greatly affect businesses that usually operate or draw customers later in the day. He said an over 80 per cent decrease was observed in the business of this type of shops in Limassol and Paphos that have been closing at 10.30pm during the past couple of weeks, since this measure was initially introduced for these two districts.

Leventis also pointed out that the industry has already been operating with restrictions and that some businesses with open-air spaces would close for the winter given the fact that it was not feasible for them to operate just with up to 75 people inside, depending on the size of their space.

The maximum number of customers allowed in these venues is 75 inside and 150 outside, with six persons per table maximum.

At a first glance, he said, the schemes announced on Thursday by Labour Minister Zeta Emilianidou to support businesses, workers, and the unemployed for the next few months, seem to cover several groups within the industry. He added, however, that this was not enough since the schemes concern subsidies for staff wages.

He recalled that dance and music venues such as nightclubs remain closed since last March and that additional measures were necessary to help support these businesses that have taken a massive blow.

Both Kapari and Leventis expressed hope that the measures to be announced by the finance minister to support businesses would help their industries survive the blow.
Leventis also raised the issue of rent.

President Nicos Anastasiades last week referred the law passed by parliament on October 9 which extends the suspension of any eviction proceedings against tenants until the end of 2020. The argument was that extending the suspension of evictions cannot be justified since there were no universal measures restricting the movement of citizens, which was the case when the suspension was first introduced earlier in the year.

“Some owners were emboldened by this and started sending letters to businesses,” Leventis said, arguing that this issue must be settled once and for all calling for “a just solution for all; property owners and tenants.”

But the sports industry too, call for a review of the measures.

The association of gym owners said the decision to suspend the operation of gyms in the Limassol and Paphos districts was “unfair and unjustified” and called for its reversal.
Paphos’ sports and dance professionals expressed their disagreement with the ban on such activities for minors arguing that these activities have a positive effect on children’s mental and physical health.
Director of Atlantas sports club, Demetris Delichristos told the Cyprus News Agency this was “an injsustice and illogical.”

He wondered how it is possible to operate bars, restaurants, cafes, churches and to hold weddings and baptisms and not allow a child to play sports with social distancing on the track.

“The spread of the virus does not exist in sports venues since doctors themselves say that children, especially those under the age of 15, do not carry the virus but also get sick even more rarely,” he said.

According to him, the sports sector has been “mercilessly beaten” without help or subsidy from the state.”
Lina Constantinidou head of Dance Culture Pafos, a group representing dance schools in the district, said culture was marginalised again, adding that they are on the brink of collapse, both financially and psychologically.

Cyprus’ Olympians, the union of athletes that participate in the Olympics, called for a review of the restrictive measures on sports arguing they would have serious consequences for athletes of all ages and for their clubs and can be disastrous for Cyprus’ sports in general as they create a lost generation of athletes and future champions.

Sports, they said, “is a social good and should continue to operate at all levels, under any restrictions and measures.”

They added that there should be no distinction between professional and amateur sports while those under 18 that are particularly affected, were “thοse ages that will give us our future champions.”

Our View: Limited lockdown is not too drastic