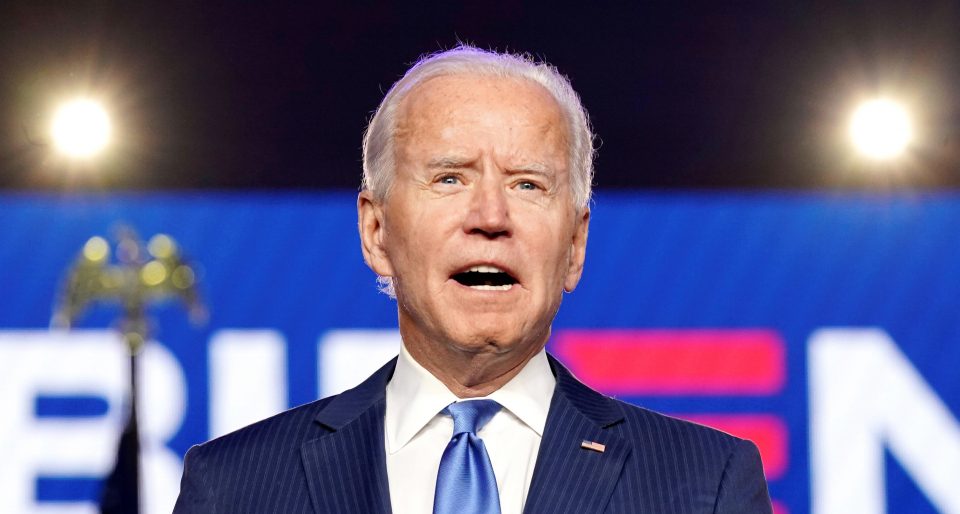 Trump immediately accused Biden of “rushing to falsely pose as the winner.”

“This election is far from over,” he said in a statement.

Biden’s projected victory came after four days of nail-biting suspense over the outcome of Tuesday’s election, with the counting of votes in a handful of battleground states still going on thanks to a flood of mail-in ballots.

Loud cheers erupted in the halls of the hotel where Biden aides were staying and around the country.

“Worth every minute,” of the wait, a Biden aide said, as campaign staff exchanged elbow bumps and air hugs in the lobby.

In Park Slope, Brooklyn, crowds of people gathered in the streets, breaking out in cheers, jumping up and down and banging pots. Across Takoma Park, Maryland, a liberal city bordering the capital, cheers erupted and some banged pots and pans on their porches.

When the former vice president enters the White House on Jan. 20, the oldest person to assume the office at age 78, he likely will face a difficult task governing in a deeply polarized Washington, underscored by a record nationwide voter turnout in a fight to the finish.

Biden said on Friday he expected to win the race but stopped short of giving a victory speech. A Trump adviser acknowledged on Friday that the race had tilted against Trump, but said the president was not ready to admit defeat.

Biden had a 273 to 214 lead in the state-by-state Electoral College vote that determines the winner, having won Pennsylvania’s 20 electoral votes to put him over the 270 he needed to secure the presidency, according to Edison Research.

To secure the win, Biden faced unprecedented challenges. These included Republican-led efforts to limit mail-in voting at a time when a record number of people were due to vote by mail because of the pandemic, which has killed more than 235,000 people in the United States.

Both sides characterized the 2020 election as one of the most crucial in U.S. history, as important as votes during the 1860s Civil War and the 1930s Great Depression.

For months, officials on both sides raised the spectre of the United States not being able to pull off a fair vote. In the end, however, voting at the polls proceeded with limited disruption as millions lined up patiently to vote. Thousands of election monitors from both parties worked for four days to ensure the votes were being counted.

The election drama is likely to play out for weeks, if not months. Trump, 74, is contesting the vote in the courts, but legal experts said his challenges had little chance of affecting the outcome.

Biden’s victory was driven by strong support from groups including women, African Americans, white voters with college degrees and city-dwellers. He was more than four million votes ahead of Trump in the nationwide popular vote count.

Biden, who has spent half a century in public life as a U.S. senator and then vice president under Trump’s predecessor Barack Obama, will inherit a nation in turmoil over the coronavirus pandemic and the related economic slowdown as well as disruptive protests against racism and police brutality.

Biden has said his first priority will be developing a plan to contain and recover from the pandemic, promising to improve access to testing and, unlike Trump, to heed the advice of leading public health officials and scientists.

Biden also has pledged to restore a sense of normalcy to the White House after a presidency in which Trump praised authoritarian foreign leaders, disdained longstanding global alliances, refused to disavow white supremacists and cast doubt on the legitimacy of the U.S. election system.

Despite his victory, Biden will have failed to deliver the sweeping repudiation to Trump that Democrats had hoped for, reflecting the deep support the president enjoys despite his tumultuous four years in office.

This could complicate Biden’s campaign promises to reverse key parts of Trump’s legacy. These include deep Trump tax cuts that especially benefited corporations and the wealthy, hardline immigration policies, efforts to dismantle the 2010 Obamacare healthcare law and Trump’s abandonment of such international agreements as the Paris climate accord and Iran nuclear deal.

Should Republicans keep control of the U.S. Senate, they would likely block large parts of his legislative agenda, including expanding healthcare and fighting climate change. That prospect could depend on the outcome of four undecided Senate races, including two in Georgia.

Biden, set to become the 46th U.S. president, mounted unsuccessful bids for the presidency in 1988 and 2008. His running mate, U.S. Senator Kamala Harris, will become the first woman, the first Black American and the first American of Asian descent to serve as vice president, the country’s No. 2 office.

‘TRYING TO STEAL AN ELECTION’

For Trump, it was an unsettling end after an astonishing political rise. The real estate developer who established a nationwide brand as a reality TV personality upset Democrat Hillary Clinton to win the presidency in 2016 in his first run for elected office. Four years later, he becomes the first U.S. president to lose a re-election bid since Republican George H.W. Bush in 1992.

Despite his draconian immigration curbs, Trump made surprising inroads with Latino voters. He also won battleground states such as Florida, where his pledge to prioritize the economy even if it increased the threat of the coronavirus appeared to have resonated.

In the end, though, Trump failed to significantly widen his appeal beyond a committed core of rural and working-class white voters who embraced his right-wing populism and “America First” nationalism.

Prior to the election, Trump had refused to commit to a peaceful transfer of power if he lost to Biden – and he stuck to that approach. He falsely declared victory long before counting was complete.

Before Biden’s victory projection and with Trump’s re-election chances fading as more votes were counted, the president launched an extraordinary assault on the country’s democratic process from the White House on Thursday, falsely claiming the election was being stolen from him.

Offering no evidence, Trump assailed election workers and alleged fraud in the states where results from a dwindling set of uncounted votes pushed Biden nearer to victory.

“This is a case where they’re trying to steal an election,” Trump said on Thursday.

Urging patience as votes were counted, Biden responded on Twitter: “No one is going to take our democracy away from us. Not now, not ever.”

Jordan shoots 64 to advance to final round of Cyprus Showdown

Man arrested after knife found, driving under influence of drugs