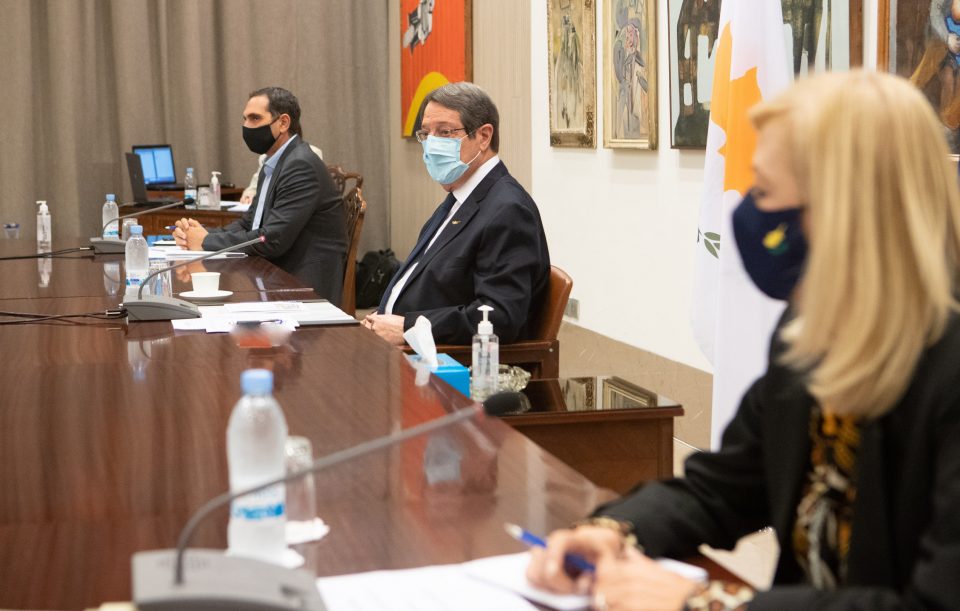 Amid a protracted and worrying spike in the number of new coronavirus cases and hospitalised patients, President Nicos Anastasiades on Monday evening held an urgent meeting with his team of experts but held off announcing new measures – at least for tonight.

He told reporters that the situation, both as regards the outbreak and the number of patients in hospital, was being monitored and any decisions will be announced in two days.

“The decisions that must be taken will be announced when the time is right,” he said.

The president would not be drawn on what the government had in mind, particularly whether it was considering either a partial or total lockdown.

Citing Cyprus’ success in tackling the outbreak earlier this year, Anastasiades said that he understood people’s fatigue and concerns about the economy but stressed the need to protect the health system.

The health system was still coping extremely well, but it was essential to stay on top of things so as to avoid overwhelming it, he said.

“If we see phenomena as in other countries then neither the health system nor the economy will cope,” he said.

Though many of the new cases were among young people, there is concern if the outbreak spreads to the elderly and there is an increase in hospitalisations and especially in the ICUs and probably deaths, he added.

“This is something that should concern us all. I understand the fatigue, but we can’t be indifferent to dangers ahead of us,” he said.

The number of coronavirus patients in hospital set a new record of 85 on Monday, while new daily cases remain stubbornly above 100. Authorities, who have been focusing on a surge in Limassol and Paphos, have since the weekend been scrambling to contain an outbreak at a Nicosia slaughterhouse where at least 92 people have already tested positive.

And with Famagusta general, the referral hospital, rapidly filling up with patients, the state health services organisation, Okipy has been creating wards at other hospitals.

Speaking to media after the meeting, deputy government spokesman Panayiotis Sentonas said that the president had been briefed about the deterioration in the epidemiological situation. Representatives from the state health services organisation, Okipy had briefed him about the situation in the hospitals.

“The experts submitted their views and suggestions about the possible measures that will have to be taken. These will be studied and decisions are expected to be taken by the government in the next few days,” he said.

UN envoy Lute to visit before end of November

Fierce fighting in Nagorno-Karabakh after Azeris say they capture city